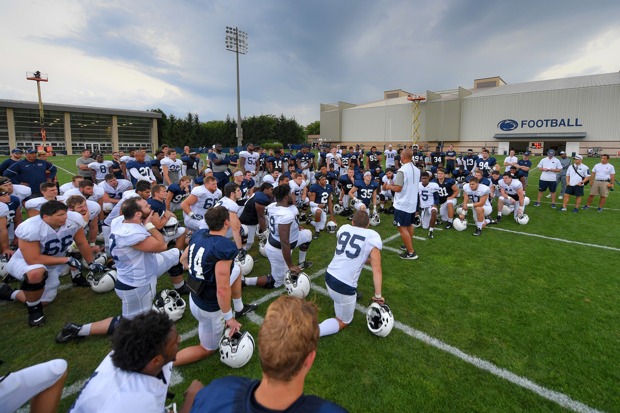 A recommendation to appoint HOK to design the next phases of renovations to the Mildred and Louis Lasch Football Building, as well as upgrades to the football outdoor practice fields and Holuba Hall, has been approved by the Penn State Board of Trustees Committee on Finance, Business and Capital Planning.

The estimated US$69m multi-phased renovations will complete the recommendations outlined in Penn State Intercollegiate Athletics’ Concept Design/Feasibility Study in 2014. All of the renovations are supported by ICA’s facilities master plan.

The recommendation was presented to the full board Friday, May 3, for a vote, which was expected to be passed.

The Nittany Lions are among only six teams nationally to finish in the Top 15 in the College Football Playoff’s final ranking in each of the past three seasons, earning a 31-9 record.

Investing in our athletic facilities will continue to be a very high priority for Penn State Athletics in the years to come. We need to continue to provide our student-athletes with the quality of facilities that match the national championship-caliber programs we desire across all 31 sports. We’re very appreciative of the support we’ve received, and will continue to seek, for the Football Excellence Fund. Our passionate community clearly see the renovations to the Lasch Building and the football complex as essential resources our students need to achieve great success in the classroom and competition.

Head Football Coach, James Franklin, expressed his appreciation to the board for the opportunity to move the project forward, and added, “now it’s incumbent upon us to fundraise to make these improvements a reality.”

The renovations already completed in Lasch Building have played a critical role in helping develop our student-athletes and build one of the top football programs in the nation. To sustain and strengthen our successes, we need to keep investing to give our students and staff all the tools they need for us to win at the very highest level, on and off the field.

The proposed Lasch project will complete renovations to the building, all of which have been privately funded. This phase of the Lasch renovations will include an expansion of the strength and conditioning facility and upgrades to the coaches’ offices and meeting rooms used by coaches, staff and student-athletes.

The Lasch outdoor practice fields project will include levelling the grass fields to eliminate the existing slope, providing a full rotation of natural turf to accommodate multiple orientations of the fields, and providing permanent filming platforms, as well as an outdoor training hill.

Constructed in 1986, Holuba Hall renovations will include additional restrooms and spectator amenities.

Since the first Lasch Building renovation project was announced in January 2015, a total of US$28.1m has been raised for the Football Excellence Fund to finance the upgrades.

Fundraising efforts for this project are ongoing, as the renovations are expected to be primarily financed through private gifts. If approved, the project will tentatively begin early phases this summer, with the completion date to be determined based on fundraising efforts.

Image credits: Penn State football coach addresses his team at the football outdoor practice field in this recent image. Intercollegiate Athletics plans to upgrade the football outdoor practice fields and Holuba Hall, as well as continue with the next phase of renovations for the Mildred and Louis Lasch Football Building. A recommendation to appoint HOK of Philadelphia to design the projects was approved by the Board of Trustees Committee on Finance, Business and Capital Planning on May 2. IMAGE: PENN STATE ATHLETICS