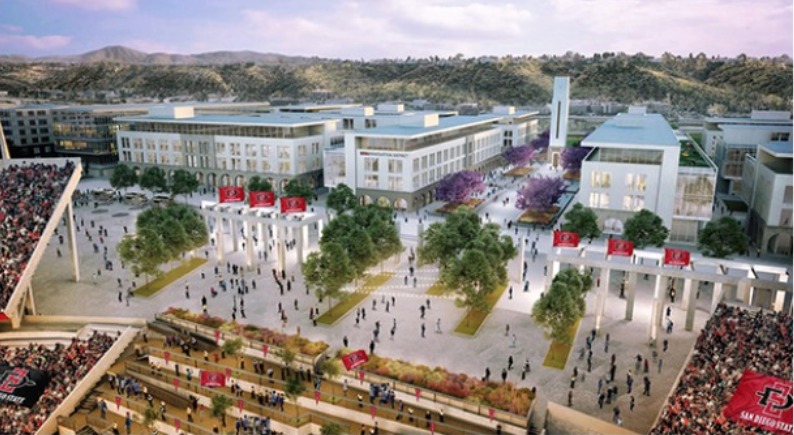 Gensler has been selected as the architect for San Diego State University’s proposed new multi-use stadium and will work alongside Clark Construction, which was selected earlier this year as the design-build contractor for the expandable 35,000-capacity stadium.

As proposed, the new multi-use stadium will support collegiate football, professional and collegiate soccer, NCAA championships, concerts and other events. In keeping with the current timeline, if approved, construction is slated to begin in early 2020 with a completion date in time for the start of the 2022 NCAA football season.

Clark Construction and SDSU went through a joint selection process to choose Gensler, a leading global design firm. The final selection was announced to bidders on April 17.

I am pleased with the selection of Gensler as our architect partner on SDSU’s new multi-use stadium. We had a very competitive process and appreciate the experienced professionals and new ideas that Gensler brings to the table. We have challenged Gensler to design a unique stadium that will meet the needs of the entire San Diego community and look forward to working with our entire team over the next couple of years to deliver a great stadium.

During the selection process, the Gensler project team demonstrated a deep understanding of the design-build process. They bring with them world-class and current expertise in the design and delivery of sports facilities, including the Los Angeles Football Club’s Banc of California Stadium and Performance Center at Cal State Los Angeles, the new home of the Golden State Warriors at Chase Center, and the recently opened Student Recreation and Aquatics Center at San Jose State University. Gensler is also responsible for the concessions redesign of Petco Park and the modernisation of several NFL stadiums, including those in Philadelphia and Cleveland.

We had the opportunity to consider an excellent group of designers for the stadium and the Gensler team distinguished themselves by their ideas and the strength of talent dedicated to the project. We were very impressed by their body of work and the new concepts they have developed for the new stadium. We are excited to incorporate Gensler into the project team and we are certain they will maximize the value of the proposed new stadium for SDSU and the San Diego region.

Recently named one of the most innovative companies in architecture by FastCompany, Gensler is a global sustainability leader. Their expertise will assist SDSU in achieving its goal of LEED Silver designation on the new stadium.

We are excited to be working alongside San Diego State University and Clark Construction to bring a unique game-day experience to the university community. The venue will reflect the dynamic spirit of San Diego while offering flexibility for a variety of events beyond football.

The design and planning for the proposed new stadium is taking place concurrent with the university’s negotiations with the City of San Diego to purchase the land, and the preparation of the Draft Environmental Impact Report (DEIR) for the complete SDSU Mission Valley development. The university anticipates the draft EIR will be out for public review this summer and the California State University Board of Trustees is expected to consider its approval at its first meeting in 2020.

In addition to the new stadium, SDSU Mission Valley will be the location of a campus expansion, which will include a world-class university research and innovation district, a community river park and housing.

For more information, go to: sdsu.edu/missionvalley