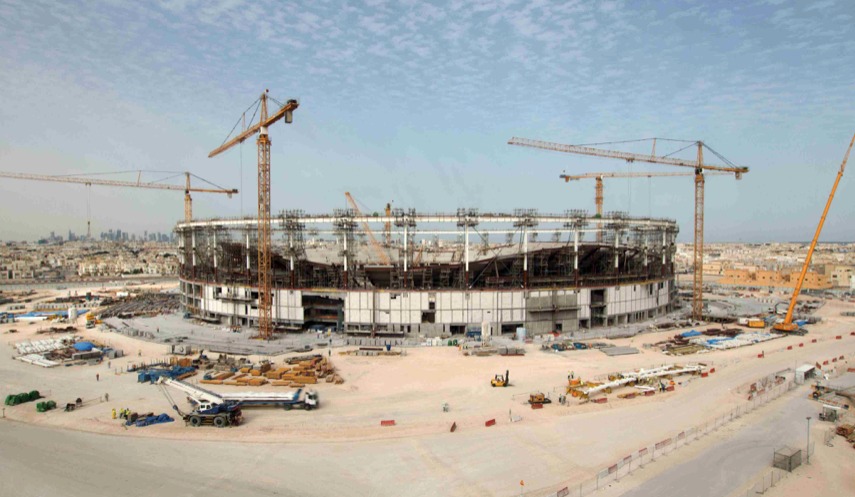 The team building the venue – proposed to host games up to and including the quarter-final stage during the FIFA World Cup Qatar 2022™ – is installing the steel and cables in preparation for the operation known as the ‘big lift’ of the roof structure.

The roof columns and compression ring serve as an integral part for the roof’s structure. Successfully installing these items means we are a step closer to the big lift, which is considered the main event in stadium construction.

The ‘big lift’ requires the use of 80 hydraulic jacks and 10 hydraulic pumps installed around the compression ring to carefully lift an intricate 727-tonne cable net system into place. This laborious procedure is expected to take approximately seven to 14 days.

More than 50,000m³ of concrete have been cast at the site, while 2,285 tonnes of steel have been installed and approximately 38,400 m² of masonry works have been completed.

Materials to build Al Thumama Stadium have been brought from many providers from different countries including the USA, Spain, Japan, South Korea, Luxemburg, Turkey, Germany and Switzerland.

The design of the 40,000-seat stadium is inspired by the ‘gahfiya’ headpiece worn by men in Qatar and across the MENA region. It is the first venue to be designed solely by a Qatari architect, Ibrahim Mohammed Jaidah of the renowned Arab Engineering Bureau (AEB) – one of the oldest architectural and engineering firms in Qatar – which was responsible for the concept and schematic design of Al Thumama Stadium.

After Qatar 2022, Al Thumama Stadium’s seating capacity will be reduced from 40,000 to 20,000. The 20,000 seats removed from the stadium will be donated to countries in need of sporting infrastructure.

It is envisaged the stadium will be transformed into a ‘sport city’ complemented by other mixed use developments, such as a hotel and a sports clinic.

Given its potential location as a major component of the south region, the precinct will provide a long-term focus on sport, leisure, community, housing and cultural uses.

Cooling technology was also devised in the design of the stadium where 2,500 construction workers are currently employed. Another design target is to decrease the carbon footprint of the structure in the long term, which is targeting a four-star Global Sustainability Assessment System (GSAS) certification for both design and construction.

Main contractor works at Al Thumama Stadium are scheduled for completion by 2020.