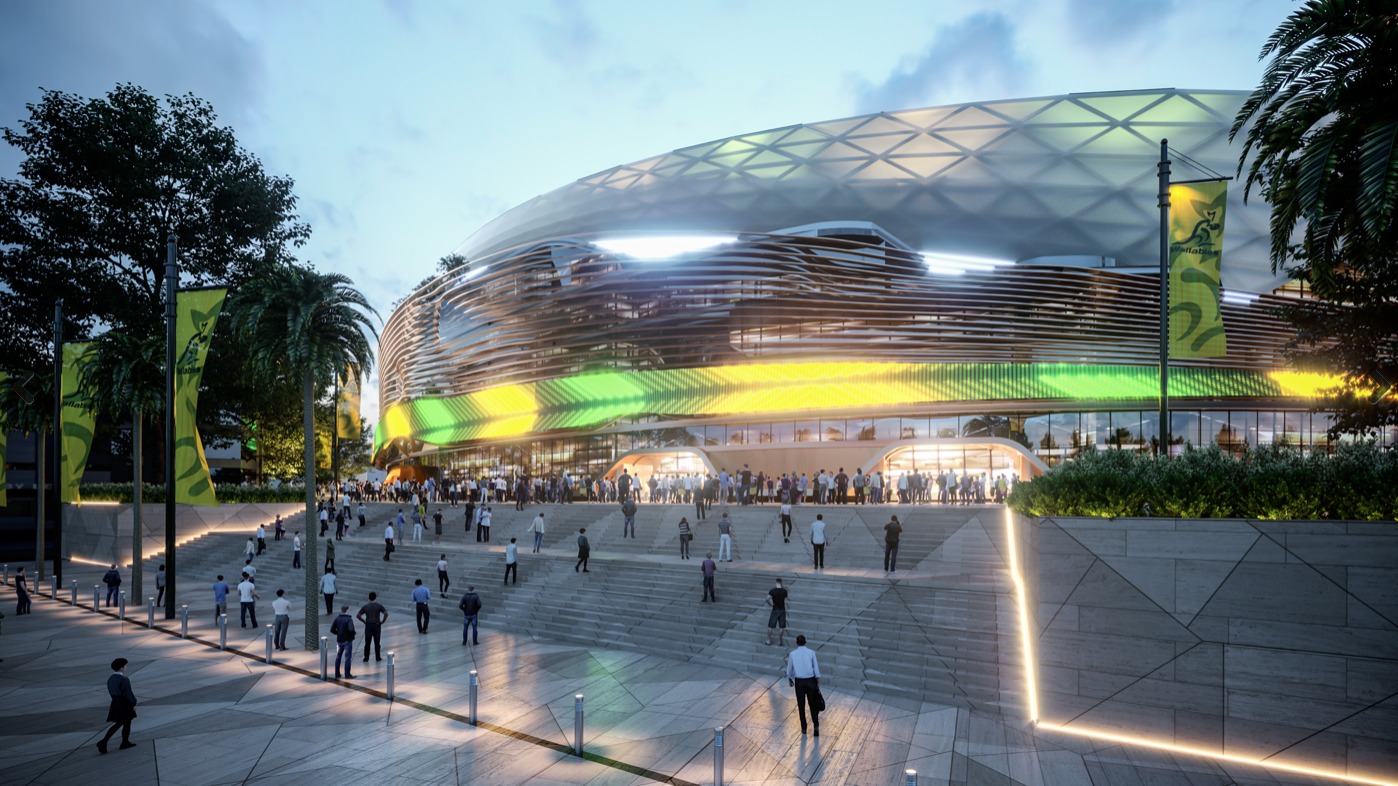 Cox Architecture’s proposal for a new stadium at Moore Park, adjacent to the Sydney Cricket Ground, and on the site of the current Allianz Stadium, has been selected by the NSW Government.

As workers get set to dismantle Sydney’s Allianz Stadium, the New South Wales Government has unveiled the winning design of its replacement by Sydney-based Cox Architecture, whose design succeeded over two other rival proposals.

The Sydney Cricket and Sports Ground Trust is excited to take the first steps forward in a comprehensive action plan for the rebuild of the Sydney Football Stadium (SFS). The Moore Park stadium is to be knocked down and rebuilt at a cost of around A$730m as part of the government’s A$1.5bn plan to upgrade ANZ Stadium at Olympic Park.

The NSW Government is redeveloping the SFS into a modern, world class venue, to ensure Sydney has a sporting and entertainment precinct of international standard and that NSW remains the number one choice for sporting and entertainment events in Australia. The project will build on the legacy of the Sydney Sports Ground (1899) and the original SFS, opened as a Bicentennial Project in 1988.

The SFS is now the oldest top-tier rectangular stadium in Australia, with significant safety, compliance and patron safety issues, together with insufficient female toilets and inadequate provision for disability access. To address these issues, the NSW Government will rebuild the venue into a 40,000 to 45,000-seat rectangular stadium with substantially improved sightlines, a roof that covers all patrons, with vastly improved amenities, food and beverage options and accessibility.

The design will create a colosseum of sound and colour that will set the standard for rectangular stadiums in Australia…from technology and design to amazing views, it’s nothing short of world-class.

The State and the reference design set rigorous targets for any new scheme to achieve, recognising the location, quality and legacy that the existing Sydney Football Stadium represents. Despite this daunting task, I’m proud to say that our team has risen to the challenge and in many cases actually surpassed the exacting objectives set out in the brief; we’ve proposed something with more community value, more experience for teams and fans, and with better connection to surrounding parkland and amenity. It is something that is simultaneously sculptural and highly functional. It is lighter, kinder to the environment and more self-sufficient as a structure than any other major stadium in Australia. It is a fitting continuation of what it replaces.

Creating something that both ‘fits in yet stands out’ in that part of Sydney is obviously a tough ask for any design team, as is the task of creating a piece of 7-day civic infrastructure that provides superior amenity and services to multiple specialist and public groups. More than this, these services must be provided in a way that doesn’t detract from what a stadium needs to do well; provide a superior platform for sports and events spectacle for teams, performers and fans. And of course, there was the added responsibility to craft a form which echoes the elegance, balance and recognition of Philip Cox’s original design.

Cox Architecture has said the new stadium would only last 30 to 40 years before it too needed to be replaced, as Director, Alastair Richardson, advised:

We’re future-proofing it, there’s no doubt about that, the issue of the life of the buildings comes to what’s going on in 30 years time, we don’t know as best as anyone.

Ayres said he hoped the stadium could have a refit before being torn down:

We’ve got a design life that’ll be between 30 and 40 years. We know that stadium infrastructure needs to be renewed. One of the things that we want to be able to design into stadiums is the capacity to have mid-life refits.

The stadium has been designed from the ‘outside in’ and will integrate with its Moore Park environs. A sculptural ribbon facade will draw on elements of technology, engineering and art, with its materiality changing in direct response to the immediate context, from surrounding fig trees, to the Sydney Cricket Ground (SCG), Kippax Lake and the neighbourhood of Paddington.

The structure will include an activated events platform in place of a conventional pedestrian concourse, which will create a year-round public precinct for events. The landscape, designed by Aspect Studios, will weave together the parkland, public and activated spaces.

The stadium will have a lightweight roof structure that uses 40 percent less steel compared to the reference design, as well as solar panels and water harvesting solutions integrated into the roof.

Demolition of the Sydney Football Stadium is due to begin in January 2019 and the new stadium is expected to be complete by March 2022.