A planning application for the redevelopment of the Compton and Edrich Stands at Lord’s was submitted to Westminster City Council by MCC on October 3, 2018.

The application may be viewed on the website by clicking HERE and a determination is anticipated early in the New Year.

If the consent is granted, and Marylebone Cricket Club (MCC) Members subsequently approve the plans at the Club’s AGM in May, work on site is scheduled to start after the Test Match against Australia next year in accordance with the project timetable.

The proposed new three-tier stands, designed by two-time Stirling Prize winning architects WilkinsonEyre, will increase the capacity of the two stands by around 2,500 seats to a total of 11,500.

At the 2013 AGM, MCC unveiled its Masterplan for the redevelopment of Lord’s.

It is a phased development aimed at improving and modernising facilities for everyone who uses, visits and works at the Ground, whilst preserving its unique charm and character. It aims to secure the position of Lord’s as the finest ground in the world to watch and play cricket. The Masterplan is not set in stone, it can evolve over time to reflect changing priorities, financial circumstances, and maybe even a changing game. However, it does lay down key priorities and principles for the development of the Ground.

A fundamental aspiration of the Masterplan is to reduce the conflict between spectators and services within Lord’s, increasing its operational efficiency and thereby improving the experience for visitors. It also upholds the importance of retaining the size of both the Main and Nursery playing areas.

Every new addition to the Ground will be architecturally significant, distinct from but complementary to other existing buildings, to ensure Lord’s remains unmistakably a cricket ground rather than a stadium, and one that makes the most of its green spaces.

In an increasingly competitive landscape, it is important that MCC is able to demonstrate to both the England & Wales Cricket Board (ECB) and Westminster City Council that it has a cohesive plan to develop and improve the entire Ground over the short, medium and long term.

In 2017, MCC Members voted to redevelop the Ground from the Club’s own resources without recourse to enabling residential development; in doing so they supported the Committee’s decision to proceed with the Masterplan, which had commenced with the redevelopment of the Warner Stand in 2017. 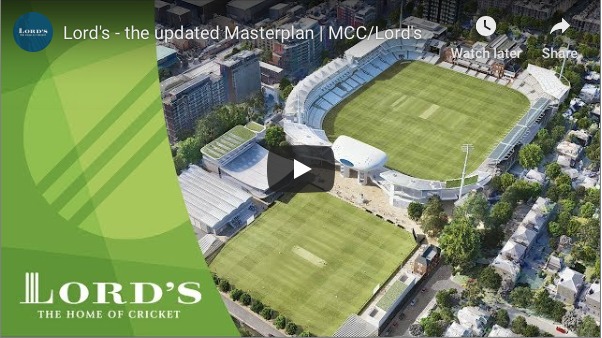 With the Warner Stand complete, the next major phase will be to redevelop new, larger Compton and Edrich stands. The aim is to begin construction in late 2019, with new seating provided for the 2020 season and the stands fitted out with facilities for the 2021 season.

A new East Gate Building, with office space, a shop, catering facilities and subterranean services is due to be completed by 2025, with the Nursery Ground moved towards the Wellington Road in time for the 2026 season. Work will then commence again at the Pavilion End, with the redevelopment of the Tavern and Allen stands and Thomas Lord Building.

The Updated Masterplan is projected to be completed in 2032.