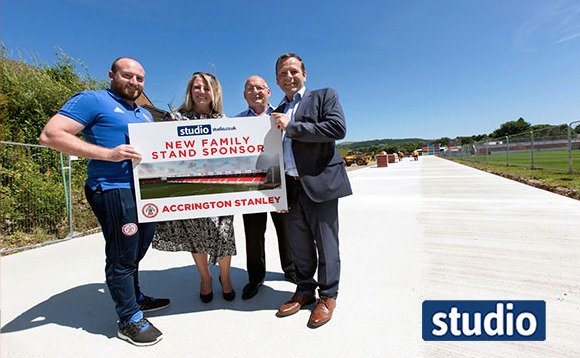 Accrington Stanley have been on a winning streak of late, from winning promotion to League One, permission being granted to develop land into a training facility for the club and a sponsor deal being signed for the new Whinney Hill Family Stand.

Accrington Stanley Football Club’s Wham Stadium will undergo a huge GBP£1.5m transformation over the coming months with the new Family Stand set to be finished in November, after winning League Two last season and being promoted to League One.

Success has continued off the pitch too, with approval having been received for the club’s new training facility at the end of June; the ‘change of use of agricultural land’ was passed by Ribble Valley Borough Council subject to further reports and conditions.

Reds’ owner, Andy Holt, applied for ‘a construction of a new sports changing room facility, including showers, and associated car park with new inclusive access road’ at the fields, off Whalley Road in Read.

There will be a few months of tests to carry out first for flood risk and so on but this is a big boost for us.

Hot on the heels of these successes, the club announced that their new Whinney Hill Family Stand will be sponsored by Studio – a thriving Accrington-based company, striving to support other local businesses and sports clubs – on a three-year deal.

We are really excited to be sponsoring the family stand at the football club, it’ll be fabulous! The club are doing amazingly well at the moment and to be able to support the club and the community is really important to Studio. Our primary aim with regards to this sponsorship is to engage with the local community – to show them that we are supportive of redevelopment within borough. We can’t wait to see the finished family stand.

Established in 1962, Studio (Express Gifts) are now turning over £400m, supply to 1.8 million customers and employ 2,400 people in peak periods. They are the also a part of Findel PLC – a British home shopping platform – becoming the largest company within the group. They hope that forging a link with the football club will help bring connections and engagements with the local community.

Studio launched their three-year stand sponsorship at the club’s most recent #AmazingAccrington meeting.

The #AmazingAccrington initiative is to encourage the youth of today to stay in the borough tomorrow so we thought it was pivotal to share this news at an event that reflects not only our desire for this town to succeed, but also to show people in Accrington that there are reasons to stay here right on their doorstep. We are keen to raise practice and encourage more recruitment locally, to assist our ongoing planned expansion as we transform to a leading digital value retailer.

Holt, the club’s majority shareholder, said of the deal:

Any support is welcome, of course, but it’s always that little bit more special when it comes from local businesses. We hope that the new stand will encourage more visitors and will, in turn, increase footfall in Accrington. It’s all about supporting one another, businesses coming together, engaging with the community and working together for the good of the town.

We are delighted as a club that our new family stand sponsor is yet another local community business who is, once again, proud to be supporting their local club. We are looking long-term in working with our new stand sponsors Studio.co.uk and with the new stand giving the club the opportunities to encourage more families to watch Accrington Stanley live in action. Following the meeting with Studio.co.uk and to fit into their business plans and objectives over the next three years the deal was reached for them to sponsor our new-look family stand.