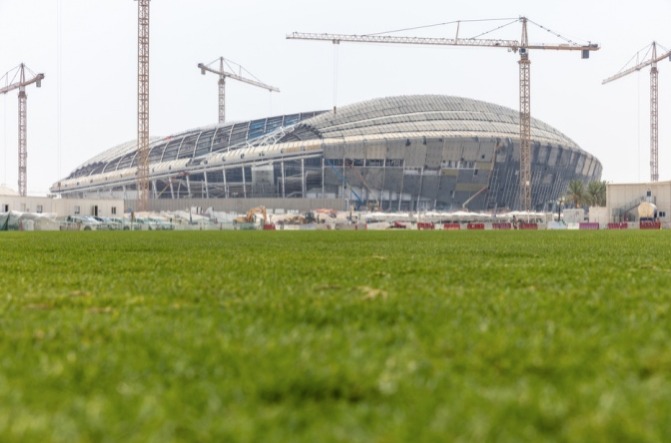 Construction of the stadiums being built to host the 2022 FIFA World Cup™ is advancing rapidly across Qatar, with the venues for the first tournament in the Arab world continuing to take shape during the peak year of preparations.

Following the completion of Khalifa International Stadium – Qatar’s first tournament-ready venue – in May 2017, the Supreme Committee for Delivery & Legacy (SC) is advancing as scheduled with work on the remaining seven venues.

The mega-project recently passed 150 million man hours across all sites, including 116 million man hours at stadium construction sites alone. Reaching this landmark figure is tantamount to the strong collaboration between the SC and its numerous stakeholders, according to Yasir Al Jamal, Vice Chairman of the SC’s Technical Delivery Office. 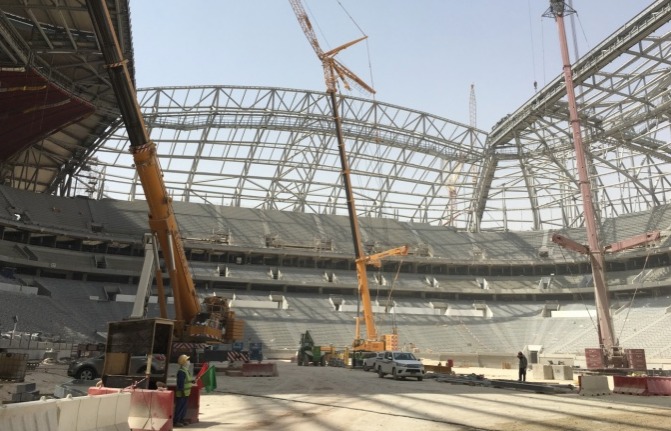 Major progress continues to be made across our stadium sites – and this is credit to not only the work of the SC, but also our various stakeholders, contractors and sub-contractors.

From day one, we have committed to strong collaboration with all our partners – particularly in relation to the health and safety of our workers. Reaching 150 million man hours is a notable landmark as we continue our journey towards 2022.

More than 30,000 people are currently engaged on SC projects, with 26,000 directly involved in the construction of proposed Qatar 2022 stadiums.

With regard to health and safety, more than 90,000 people have undertaken site safety inductions, while the SC’s Health & Safety Assurance Division has overseen 1,800 site safety visits. In addition, the SC organises monthly Safety Health and Environment Leadership Team meetings with key stakeholders, including the Ministry of Labour, Ashghal and Qatar Rail.

Since 2016, the SC has worked alongside Building and Woodworkers International, a global trade union, to carry out joint health and safety inspections, while contractors are encouraged to visit different project sites to share lessons learned and best practices.

The health, safety and wellbeing of our workers is our number one priority. We remain committed to regular inspections and collaboration opportunities, both of which allow us to share knowledge and lessons learned.

Recent milestones at each stadium: 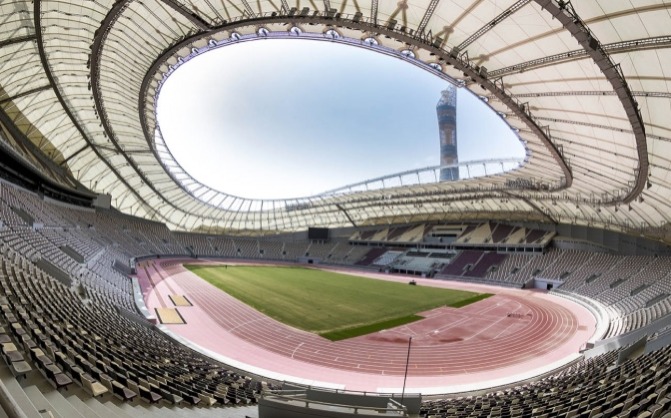 This 60,000-seat stadium is the future home of Al Khor Sports Club and a proposed semi-final venue for Qatar 2022. Installation of the retractable roof and iconic tent-like façade, along with landscaping around the precinct, are ongoing. Other developments include the laying of the pitch, the completion of four artificial lakes and installation of the solar lighting poles. Some of these poles will replicate the traditional needle used for weaving in Qatar, while others will look like Arab falcon stands.

Dar Al-Handasah served as the design consultant, while Projacs were responsible for project management in the initial phase. Qatari contractor Galfar Al Misnad is now constructing the stadium and its surroundings, in conjunction with Salini Impregilo Group and Cimolai, with overall construction supervision from KEO International Consultants.

Inspired by the late British-Iraqi architect Zaha Hadid, this design emulates the shape of the traditional dhow boat used in fishing towns like Al Wakrah. Installation of the bleachers is completed and work on the stadium roof structure and production of stadium seating, by Qatari company Coastal, is ongoing. Exciting work is also happening in an area adjacent to the site, where turf for the stadium’s pitch is being grown at the local turf nursery. This 40,000-seat stadium will host matches up to the quarter-finals stage in 2022.

AECOM designed Al Wakrah Stadium in association with Zaha Hadid Architects. AECOM serves as the design consultant on the project, while KEO International Consultants is the project manager.

This 40,000-seat venue will host matches up to the quarter-finals stage in 2022. After the tournament, it will be handed over to Al Rayyan Sports Club, one of Qatar’s most popular football clubs, when the venue capacity will be reduced to 28,000. Work on-site is advancing rapidly with the development of roof columns being completed, and the steel for the roof and upper tier seats arriving from China. These will soon be installed by a 1,250-tonne crane. The Al Rayyan Stadium project recently passed 15 million man hours without suffering a lost-time accident.

Ramboll designed the complex and AECOM is the project manager for the stadium.

Education City Stadium
The construction of the 40,000 capacity Education City Stadium remains on track following the installation of 44 V-shaped columns. In addition, the stadium’s concrete skeleton, pre-cast tier and demountable steel tiers have been built and installed. Once complete, the stadium will become the focal point for Education City’s sporting facilities and play a key role in Qatar Foundation’s commitment to community development.

The project manager for the stadium is ASTAD Project Management, while FIA Fenwick Iribarren Architects serves as the lead design consultant.

Ras Abu Aboud Stadium
This 40,000-seat venue will be the first fully demountable stadium in FIFA World Cup™ history. This landmark venue will be built using modular building blocks. The main contract was awarded in 2017, with the stadium building blocks due to arrive by the end of this year. Excavation works are ongoing in the stadium area and the reinforced concrete for the foundation is being installed.

Fenwick Iribarren Architects are the visionaries behind this venue’s bold design.

Al Thumama Stadium
Arab Engineering Bureau (AEB), the oldest architectural and engineering consulting firm in Qatar, designed Al Thumama Stadium. Inspired by the ‘gahfiya’ headdress worn by men across the Arab region, main construction works are ongoing at the 40,000-seat venue. Excavation works have been completed at the site, while the concreting of columns and internal walls at the underground level is underway.

Lusail Stadium
Construction at the venue which will host both the opening match and final in 2022, the 80,000-seat Lusail Stadium, is progressing rapidly. Stadium foundations are almost 50% complete and work on the columns and footings is ongoing. The venue, which will be the centre-piece of the tournament, is starting to take shape, with the main structure beginning to rise skywards, where it will eventually reach 80m. In addition, the lower tier foundations are nearing completion.