HomenewsNewsEvent NewsALSD and Soccerex to partner for London and Miami conferences

ALSD and Soccerex to partner for London and Miami conferences 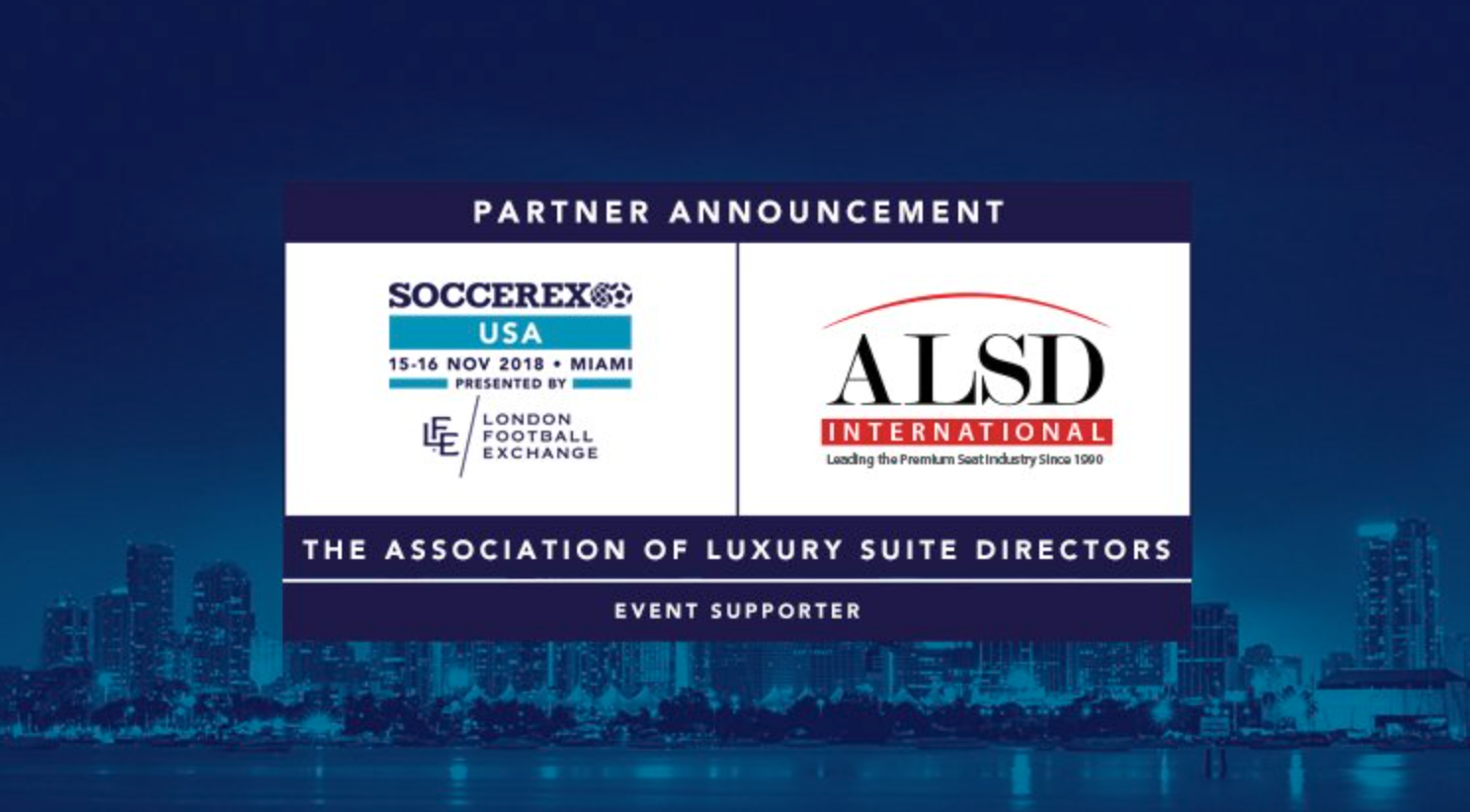 The Association of Luxury Suite Directors – the preeminent force in the premium seat marketplace – has announced a strategic partnership with Soccerex, which has brought together the global soccer (football) industry for over twenty years, connecting the game’s key stakeholders from over 40 countries.

Speaking about this latest alliance, Bill Dorsey, Chairman & Founder of the 29-year-old Association of Luxury Suite Directors (ALSD), which boasts some 1,300+ members, explained:

The ALSD is doing its first international conference in London, where Soccerex is located, this October 10-12. Soccerex is doing a major conference in Miami this November 15-16. We are complementary to each other, and do not compete. So, we simply decided to partner to market, promote, provide materials and support the conference at Soccerex in November; they in turn will assist the ALSD in reaching its global audience in much the same way.

The collaboration makes further sense because of the 2026 FIFA World Cup™, which will be co-hosted by Canada, Mexico and the United States, and the enormous growth of MLS and USL soccer leagues in the U.S. Plus the fact, Soccerex partners with global leaders in the soccer marketplace, such as Concacaf, LaLiga and MLS, and will be running Soccerex USA this November, 15-16.

Speaking about the industry in general, Dorsey explained:

It’s our assertion that premium seating or rather a premium experience will grow exponentially around the globe, and in all soccer venues.

Soccerex has delivered 44 events across the world over 22 years, taking in 17 cities in 13 countries, connecting over 60,000 senior attendees from clubs, leagues, federations and venue and supplier sides of the marketplace.

November’s Soccerex USA conference will cover topics such as stadia technology and design, the growth of soccer in the U.S., fan culture, digital fan engagement, social influencers and esports.

In today’s soccer industry, revenues from VIP, corporate and hospitality services are an important part of a club or federations’ commercial model. Working with ALSD, we will be able to call upon their expertise and unrivalled network in this sector to ensure a better experience for stadium professionals attending Soccerex USA in November in Miami through tailored topics and networking opportunities. In exchange, we are delighted to be supporting ALSD in our home city of London, a city with world-class stadiums that are home to some of the best [English] Premier League clubs and The FA.

For registration and the conference agenda for ALSD International, go to www.ALSDinternational.com

For registration and the conference agenda for Soccerex USA, go to www.soccerex.com/usa

The Association of Luxury Suite Directors (ALSD) was established in 1990 to provide a platform for member teams and venues with timely information from across all layers of the premium seat industry in stadiums and arenas throughout North America, with a growing global reach.

The ALSD is also positioned to link buyers and sellers, including vendors, suppliers, and food and beverage concessionaires in the venue marketplace. We are committed to developing and supporting a network for suite directors and team/facility executives to share information, ideas, and values. We are passionate about assisting teams and venues in providing premium seat patrons with superior service and an overall exceptional experience. We aim to be the ultimate voice and accredited resource for individuals and organisations involved in the premium seat industry.

Soccerex has been bringing together the global football industry to network in a unique commercial environment for over twenty years. From hosting industry leading networking events across the globe to our market insight campaigns, we provide a platform to connect your business with the game’s key stakeholders. We are committed to growing the beautiful game around the world and our love of football is truly at the heart of everything we do.