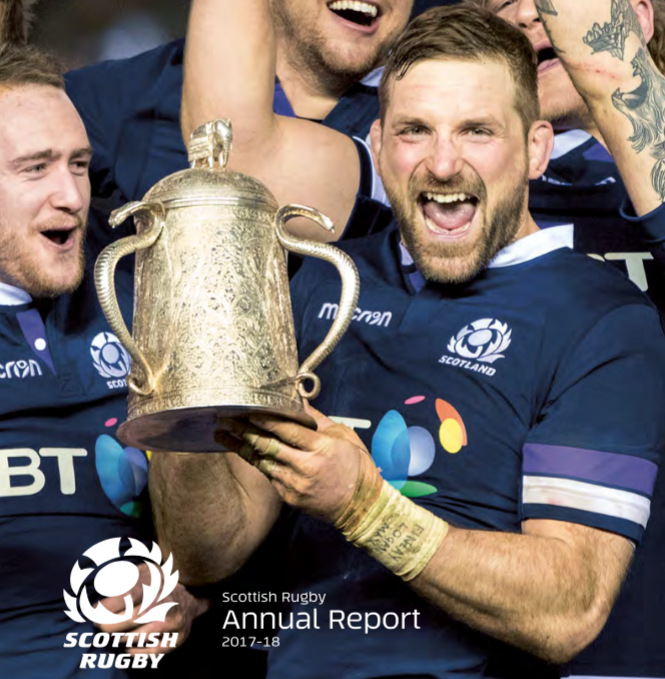 Scottish Rugby has generated one of the strongest operating results for the game in its history, which will lead to a continuing increase in investment across the sport in Scotland, its 2017/18 Annual Report has confirmed.

The highlights of the Annual Report include:

The record-breaking financial results have also enabled Scottish Rugby to record its lowest average debt in the professional era. A figure of £2.4m has been reported, a drop of £2.8m on the average debt reported in the previous year (2016/17), creating a platform for increasing sums of money to be reinvested into the grassroots game.

I’m pleased to report this year’s turnover of £57.2m marks an increase of £5.8m on the previous year. These results provide financial stability and have been driven by growth in broadcast revenue, as well as hospitality and other events at BT Murrayfield.

On the pitch, we have quality coaches, staff and a technical blueprint in place that is helping to drive the success of our national teams and develop our young players.

The increase in turnover was achieved through strong broadcast revenues of £15.2m and a rise in other operating income to £18.9m in relation to increased commercialisation of the Guinness PRO14, higher match-day hospitality and game-day related sales at BT Murrayfield, non-matchday events and income from British & Irish Lions.

Rugby in Scotland is enjoying a resurgence at international and professional level and the support for these teams has never been stronger. This has contributed to the strong financial position we can report this year, which will help us to continue to move the game forward at all levels.

We are committing record levels of investment into the grassroots game in Scotland in order to create a sustainable environment and help improve the standards of rugby being played across the board. We continue to build our brand on the global stage and find ourselves in a strong position as we head into Rugby World Cup 2019.

The sponsorship renewal of BT, extension of Tennent’s and continued support from Macron and new partners helped underpin the positive progress being made on the commercial side.

Increasing investment in the grassroots game

The results will support the ongoing and increasing investment in grassroots rugby in Scotland to deliver the Agenda 3 programme of support to clubs to help continue work in participation, performance and improved sustainability, as announced at last season’s AGM.

Following four years of support from Principal Partner, BT, Scottish Rugby is also committing to continuing, and fully funding itself, the highly important Club Sustainability Fund, which saw £1.6m invested into capital, revenue and fast-track projects, over the past four years.

A total of 31 clubs in Scotland have been supported for capital developments through the Club Sustainability Fund towards projects with overall costs of £15.6m during the four years of the previous funding term.

Across all three funding streams of the fund, 167 clubs in Scotland have received financial support for projects, initiatives and improvements.

Commercial success is vital in order to develop rugby in Scotland from the grassroots game to the international stage. This season our turnover reached a record £57.2m, building on the growth from previous seasons.

This increase in turnover has been enhanced by a growing fan base for rugby in Scotland and last season we welcomed more than 500,000 fans to our international and professional games. In terms of Scotland crowds, it was the best season ever with 335,720 attending, beating last year’s record despite hosting fewer matches.

BT Murrayfield continues to be a hugely popular venue for concerts and events and I’m delighted our family of sponsors is growing and existing partners have chosen to extend their time with us further.

Future-proofing the sport in Scotland

Some 872 teams from 104 clubs, 150 state schools and 25 independent schools compete in the Mitsubishi Motors Schools & Youth Conferences. Now in its third year, the conferences are going from strength to strength, with 2,626 games played (a rise of 16%).

The work with young players is supported nationally through the delivery of over 24,000 rugby sessions by Development Officers last season, across primary schools, secondary schools and clubs. Strong growth is also being seen in the women and girls’ game. Last season there was a 19% rise in women’s teams to 62.

More than 200 games were played at U15 and U18 level and nearly 1000 female players have been introduced to the sport through Scottish Rugby’s #BeTheBestYou campaign.