The Sabre Awards are the Oscars of communication prizes and were awarded at the beautiful Maritime Museum in Amsterdam on May 23. More than 2,000 cases from all over Europe were submitted for assessment, with the Johan Cruijff ArenA having taken home the Sabre Award in the ‘Entertainment’ category.

Johan Cruijff ArenA’s stadium seat replacement project PR and content campaign named ‘Second Life for Stadium Seats’, which was produced alongside Leene Communicatie, was nominated for this award in the ‘Entertainment’ category and ultimately took home the Gold Sabre Award.

You can find out more about the campaign by watching the video below: 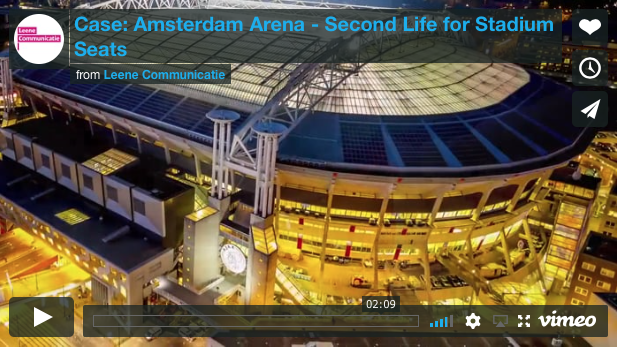 Other finalists in the ‘Entertainment’ category were:

In 2017, the 53,000-plus stadium seats in the Johan Cruijff ArenA were replaced, with the old chairs having all been permanently re-used, with some sold through the Ajax fan shop on the website, all gaining second lives.

The €15.3k sales achieved from the sale of the old seats – which were more than 21 years old and needed replacing – all went to the Ajax Foundation.

With the installation of the new seats, the ArenA has been turned completely red and white, fulfilling the long-cherished wish of the Ajax supporters.

These three variants of the stadium seats went on sale in October. Over 7,000 loose backrests and sittings were sold on the digital fan shop of Ajax. From the other two variants, approximately 3,500 pieces were sold. These new variants were designed by Koninklijke Ahrend bv and socially responsible Presikhaaf school furniture, which produced the seat at cost price.

A portion of the old seats were donated to clubs in the Netherlands, Curacao and Suriname.

The red seat sold the best by far – so I suspect we particularly made a lot of Ajax-supporters happy with this project.

As one of the most sustainable stadiums in the world, we need to keep our name high. It was a more logical to choose for circularity, in other words sustainable re-use of the seats. We delivered together with Ajax, Ahrend and Persikhaaf a good solution of this, which in addition worked out really well for the Ajax Foundation.