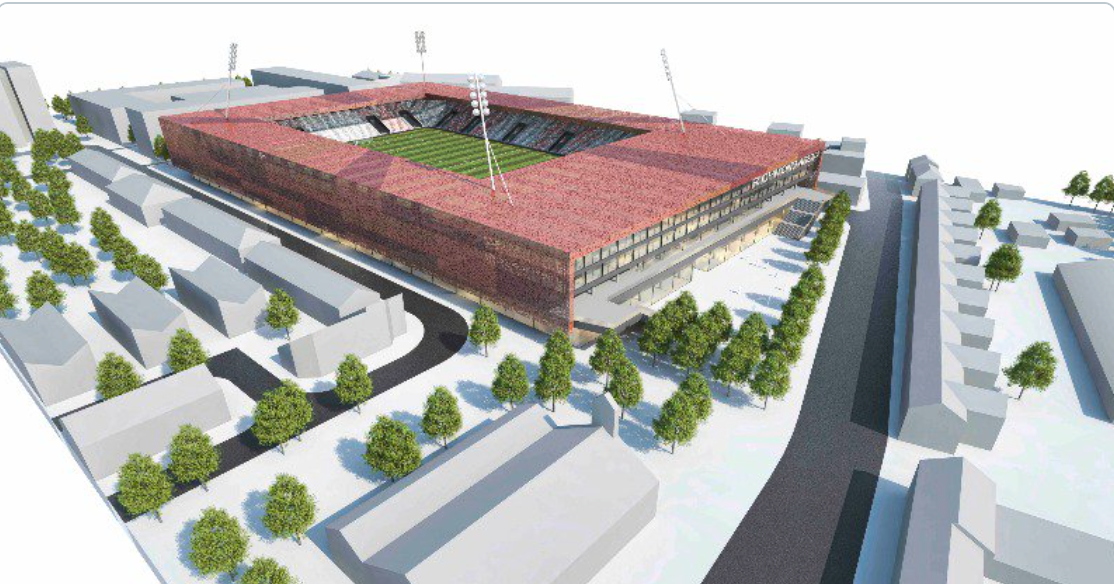 SSE Airtricity League side, St Patrick’s Athletic FC, in association with HRS International and FESP International, have announced a proposal for a major development at St Michael’s Estate in Inchicore, to include new homes and an Inchicore Town Centre with state-of-the art retail, leisure and community facilities on top of which would sit the club’s new stadium.

In the coming months, Dublin City Council is set to decide on the future of St Michael’s Estate. The City Development Plan envisages the development of a high-quality, vibrant, mixed-use urban quarter which will help to regenerate Inchicore.

The plan, which is being led by Garrett Kelleher of St Patrick’s Athletic FC, can accommodate whatever housing density and mix is required by Dublin City Council, while also providing the area with major retailers and leisure facilities, in addition to civic and community facilities.

The type of facilities to be provided will be agreed with the City Council but could include a library, indoor sports hall and a civic theatre.

The innovative feature of the development is the inclusion of a UEFA Category 3 stadium, with 12,000 covered seats and all modern facilities, at first floor level.

A first floor level stadium is a new model for Ireland but is tried and tested in Europe within the urban environment. The stadium has been designed by a leading European architect, David Mizrahi of HRS International who has been responsible for many fine stadia in Europe. He was also the lead architect with Santiago Calatrava on the Samuel Beckett and James Joyce bridges in Dublin.

The stadium development will be financially independent and will not be reliant on receiving any Government grants. It will be independently managed and serve as a venue for not only St Patrick’s Athletic FC home fixtures but many other uses, which will be an asset to Inchicore and indeed to Dublin as a whole.

The stadium has a working title of the ‘Richmond Arena‘, recognising its proximity to the historic Richmond Barracks and its location just across the road from the club’s current home, Richmond Park. The completion of the development, which will be project managed by FESP International Ltd, will take approximately two years from when planning permission is granted.

We believe our proposal is a game-changer for Inchicore and, of course, for our Club. It would give our supporters an ultra-modern stadium, which would also be suitable for a wide range of community events. It would transform Inchicore and would realise the City Council’s vision of a vibrant, high-quality urban quarter.

We will now engage with the City Council to discuss our plans and we hope to have an opportunity to play a leading role in the regeneration of our neighbourhood.