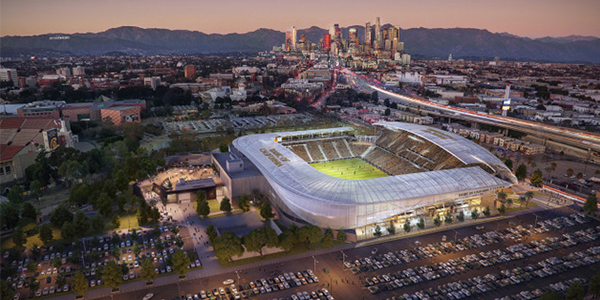 ABM, a leading provider of facility solutions, has been contracted to provide facility services including engineering and housekeeping for Banc of California Stadium.

ABM began servicing this facility in late 2017, providing engineering services to support the construction.  Housekeeping was added in early 2018, which includes routine maintenance and construction clean-up as the project approaches completion. The Company will continue to provide engineering maintenance and housekeeping service once the stadium is open to the public.

ABM will be supporting LAFC’s sustainability goals on an ongoing basis as well, through implementation of its ABM GreenCare® program for recycling, composting, and other methods of diverting waste from landfills.

We’re excited to be a part of MLS history through our partnership with LAFC, and to help them cultivate an exceptional experience for their patrons – including an emerging community of LAFC fans.

Banc of California Stadium is a state-of-the-art facility, and one of the latest additions to landmark Exposition Park, host to gardens; museums; and the Coliseum, which is slated to be the central hub of the 2028 Summer Olympics.

ABM’s proven expertise in sports facility solutions and a safety-forward culture made them the clear choice for us at Banc of California Stadium. They have a strong track record of supporting the grand opening of facilities, as well as regular maintenance and event-based services. We knew they would be able to help us make this inaugural season a success from start to finish.