Oklahoma State Baseball to get a new home 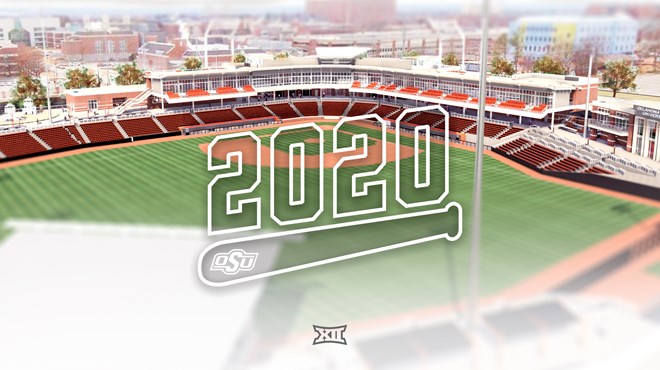 One of the most tradition-rich programs in college baseball is getting a new state-of-the-art home, with preliminary work on Oklahoma State University’s (OSU) new baseball complex having already begun on the site located at the corner of Washington Street and McElroy Road.

Inspired by Boone Pickens Stadium, the new home of the Cowboys – scheduled to open its doors in time for the start of the 2020 season – will boast several amenities catering to fans and players alike. The complex will include approximately 3,500 permanent seats, 13 suites and 400 premium seats in dedicated club and suite areas, with seating able to be expanded to 8,000 as needed.

A playground area and an outfield plaza space highlight the new family-friendly concepts incorporated into the design. The concourse area will encompass the entire playing field and will feature restroom and concession stands down the first-base and third-base lines, plus restrooms and spaces for temporary options, such as food trucks in the outfield. Other features of the concourse area will be tailgating tents, refreshment areas down both the right field and left field lines, a dedicated student section with special loge seating and terrace seating in the outfield that will serve families with young children and groups looking for space and the ability to move around freely while watching games.

A 2,000sqft video board will allow for top-of-the-line graphics and video content to further enhance the game day experience, and fans will benefit from a large parking lot able to accommodate about 600 vehicles beyond centre field. Near the right field foul pole will be a space built for hosting game day birthday parties and group functions. 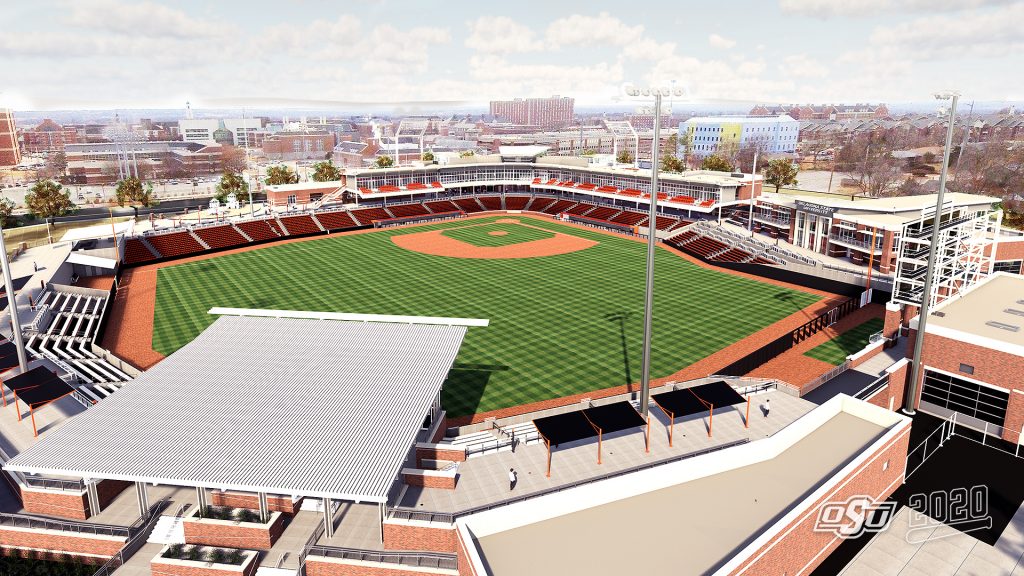 The stadium will be a physical manifestation of Oklahoma State University’s commitment to excellence in baseball. Thank you to Boone Pickens for buying the 100 acres that has become the athletic village and for sharing the belief that every student athlete and every coach deserves an opportunity to compete at the highest level.

The tradition of OSU baseball plus the leadership of Josh Holliday and Rob Walton gave life to the fundraising campaign. Thank you to all the generous donors who have made this dream a reality. This is a special day for our baseball program. A day to pay homage to the past, dream big about the future, and realize that all things are possible at OSU.

The playing surface will be natural grass, featuring a top-of-the line drainage system. A second artificial turf infield, which can be used for practice, and is one-third of a maximum-efficiency “training triangle” area that also includes an indoor facility and a pitching lab will allow the Cowboys to practice year-round, regardless of the weather conditions, without having to utilise the ballpark’s main playing surface.

There are several notable cutting-edge technology features for swing training and pitching development being built into the complex too, including the TrackMan system, which measures pitch velocity, exit speed, launch angle, distance and more. Additionally, pitchers will benefit from specialised equipment built for arm care and injury prevention.

Situated along the left-field line, the clubhouse and team room areas will provide plush accommodations for the Cowboys, starting with a 7,400sqft locker room and player lounge space that will feature top-of-the-line lockers for each player. In that same area will be a nutrition centre that will include a sports performance pantry and fuelling station and can accommodate the Cowboys’ game day nutrition needs, a tiered-seated classroom that seats 50 and a fully modernised grand entrance that leads to the new operations centre.

The operations centre will house a sports medicine area with state-of-the-art hydrotherapy equipment, a modern weight room and a baseball-specific laundry centre and equipment room. Former players will also benefit from a dedicated space within the operations centre, which will include lockers they can utilise when returning to campus to continue their professional baseball training while finishing out their academic degree programs.

Our vision was to build a facility that would allow us to develop players at the highest level, teach leadership concepts and principles, embrace the team concept and provide a first-class experience for our loyal fans and alumni. When we set out to do this, we wanted to do it with our Stillwater community in mind and capture the same game day passion we see on display each Saturday at Boone Pickens Stadium and throughout the winter at Gallagher-Iba Arena. The end result was exactly what we wanted. We accomplished our goal, and it is beyond anything I could have envisioned.

The lead architects on the project are Jim Hasenbeck and Joshua Hill of Studio Architecture, who have also worked on the Sherman Smith Center and the Greenwood Tennis Center in the Athletic Village, along with several other facilities on campus. Hasenbeck said two of the most unique features of the new baseball stadium will be the 360-degree concourse that wraps around the stadium and a glass batter’s eye that allows fans to stand directly behind it and look straight back into the batter’s box.

Similar to Boone Pickens Stadium and Gallagher-Iba Arena, the ballpark was built to let the fans be right on top of the action. There is only about 30ft from the back of the batter’s box to the first spectator row, which is located right at field level. The student section down the left field line is only about eight feet away from the foul line. The design was influenced by Boone Pickens Stadium and much like it and the Sherman Smith Center, this ballpark uses the same modified Georgian architecture seen throughout campus – it looks like an Oklahoma State building.

OSU has played the last 38 seasons in Allie P. Reynolds Stadium, which hosted its first game in April of 1981. The venerable ballpark has been home to eighteen Cowboys squads that won conference championships and twelve that appeared in the College World Series.

Watch the video on the new home of OSU baseball online at: https://youtu.be/nCtnv8sRpR4