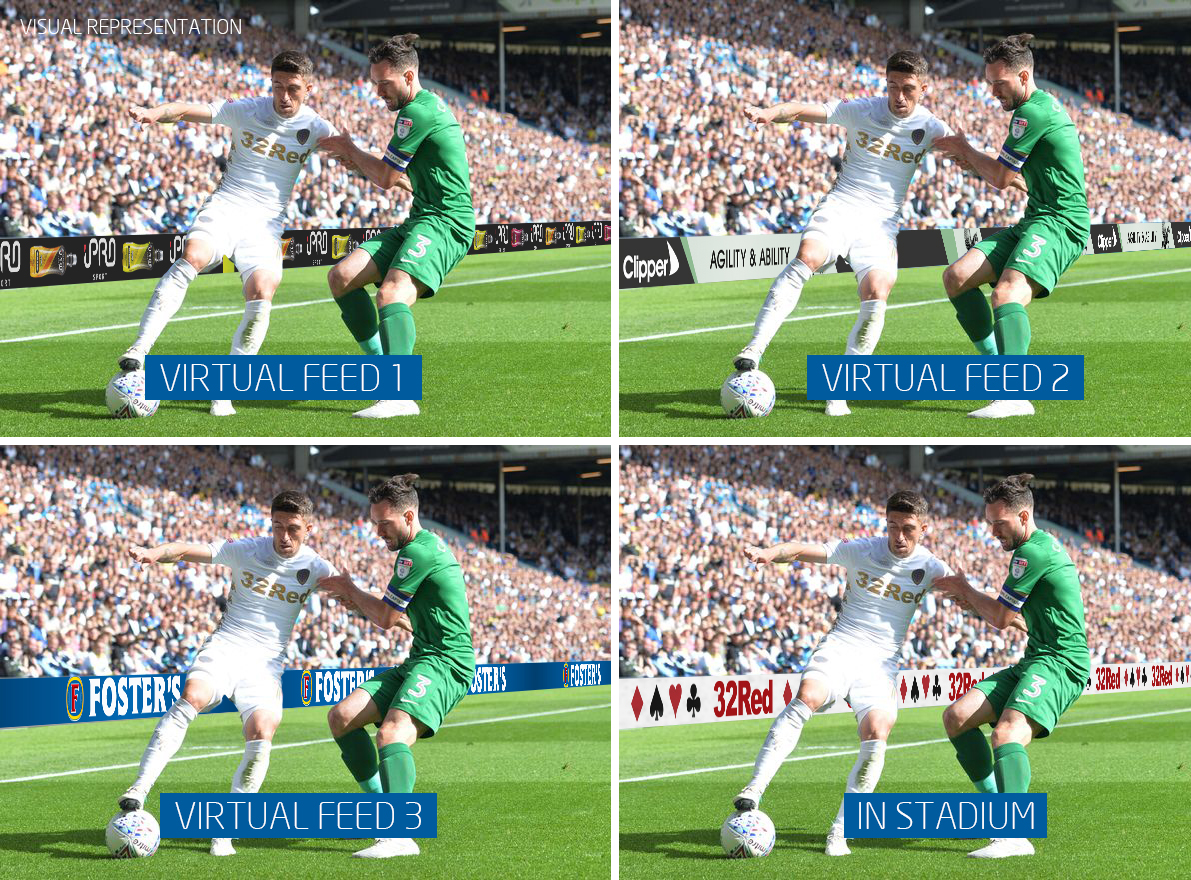 The system completely transforms the way Leeds United and their partners could engage with fans around the world by making it possible to localise messaging for individual territories.

As part of a wider digital transformation being delivered by ADI, Leeds United intend to become the first UK club to commercially deploy the breakthrough technology which, earlier this year, won top innovation honours at both the 2017 Sports Business Awards and Football Business Awards.

The new perimeter display surrounds all four sides of the pitch, and features an integrated crowd facing LED strip, enabling Leeds United to develop a more flexible commercial model that provides a platform for local, national and international partners.

The installation of the new perimeter system, which went live for the Championship match versus Norwich City in December, comes as EFL clubs gain new rights to stream live matches for international fans. Since the beginning of the season, Leeds United have streamed a number of their games live via LUTV, the Club’s own OTT and Video on Demand channel, for subscribers based outside of the UK and Ireland.

The potential for virtually overlaying different brand messages for those audiences, as well as those watching international TV broadcasts, brings huge commercial opportunities for Leeds United and their sponsors. The club plan to begin streaming customised feeds featuring virtual perimeter content later in the 2017/18 season, subject to final EFL approval.

The precedent for deploying virtual replacement perimeter technology has already been set in other sports, including La Liga, NHL and Serie A. Although previously, the technology worked only with specialist ‘static’ boards, not LED. The new LED hybrid solution by ADI and Supponor has been in development for over two and a half years, and the installation for Leeds United follows successful deployment of the technology in the English Premier League (EPL) at Watford FC, and in Germany’s Bundesliga, where it has been showcased in a number of live matches.

Fans in the stadium will see huge benefits too, as the new LED display not only enhances the aesthetic of the stadium but also, through its integrated crowd facing LED display, has the capability to deliver live stats, regional adverts, and social messaging to the tens of thousands of fans inside Elland Road.

Continuing the digital transformation, Leeds United will also install a new mid-tier LED ribbon on the East Stand, which provides a new platform through which to communicate with fans in the stadium. The digital ribbon, which is also provided by ADI, will display stats, team news and match related content, as well as offering a platform for the business community to partner with the club.

Virtual Hybrid LED technology creates a huge commercial opportunity and, with growing International audiences driven by new live streaming rights, it’s possible for EFL clubs to reach a wider fan base. This technology will help us compete on the global stage and build a platform for growth.

ADI bring a wealth of experience as the market leader in stadium LED and their Supponor-enabled Virtual Hybrid perimeter system, with its ability to overlay different brand messages for different territories, presents an incredible opportunity for partners. We are now looking forward to working with stakeholders across the industry to make virtual replacement a commercial reality.

Leeds United is a club with huge ambition and we’re delighted to be joining them on their journey to challenge convention. The installation of a new Virtual Hybrid perimeter LED display makes the club the first in the world set to commercialise the technology in this way. The market has demonstrated a real appetite for a credible virtual overlay solution, and we’re excited to be working with Leeds United, a club with truly progressive leadership, to help realise the commercial potential of their media value.

Watch an interview SVB’s Katie McIntyre conducted with ADI’s Geraint Williams at Soccerex earlier this year to find out more. Simply click on the image below.