Request For Proposals (RFP) for Construction Manager at Risk (CMAR) 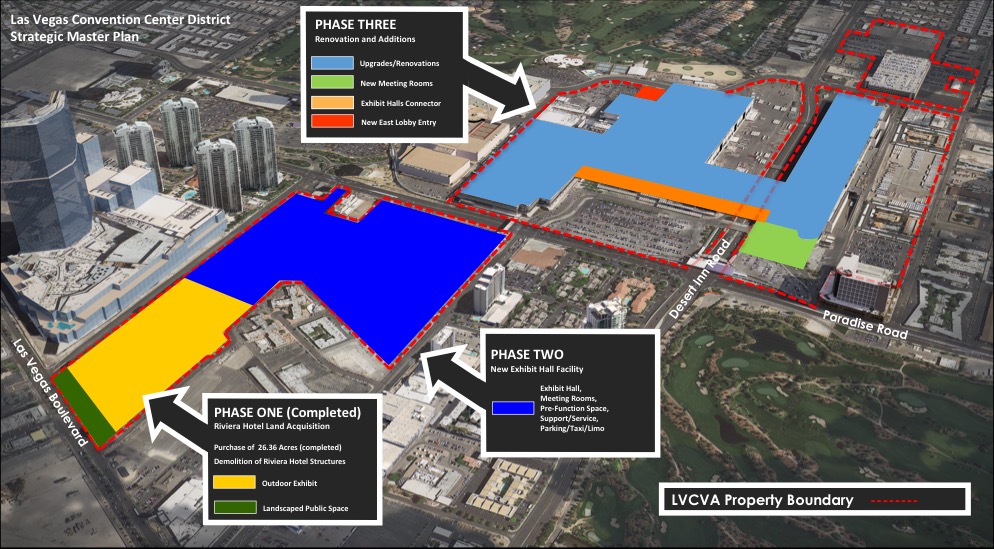 To follow, are details on the Request For Proposals (RFP) for the Construction Manager at Risk (CMAR) for the Las Vegas Convention Center District Phase 2 expansion.

REQUEST FOR PROPOSAL (“RFP”) for CONSTRUCTION MANAGER AT RISK (“CMAR”) LAS VEGAS CONVENTION CENTER DISTRICT PHASE TWO EXPANSION: RFP #18-4493-1
Documents pertinent to this RFP may be obtained by visiting www.lvccdistrict.com or by request to Cordell Corporation at: admin@cordellnv.com
Prospective CMAR Company/s/Team/s are requested to direct any questions concerning this RFP to Cordell Corporation at Tel: +1 702 892 2881 or via email to: admin@cordellnv.com between the hours of 8:00am and 5:00pm PDT, Monday through Friday.
Proposal for RFP #18-4493-1 must be submitted as described in the RFP no later than 2:00pm PDT on December 5th, 2017, at the following location:
LAS VEGAS CONVENTION AND VISITORS AUTHORITY
C/O CORDELL CORPORATION ADMINISTRATIVE OFFICES, 2ND FLOOR
3150 PARDISE ROAD
LAS VEGAS
NV 89109
UNITED STATES
The Las Vegas Convention and Visitors Authority (“Authority”) reserves the right to waive any or all of the provisions of this RFP and/or unilaterally modify the process to reject any or all proposal/s, in its sole and unfettered discretion.
The process for this RFP and any subsequent request for proposal (if any) shall comply with the requirements of the Nevada Revised Statutes, and is not considered in any manner a fee/cost based competitive bid.
View the full RFP document online at: http://www.lvccdistrict.com/rfps/

Phase One of the program was completed in January 2017 and included the acquisition of the Riviera Hotel property, the subsequent demolition of all structures associated with the hotel and the development of an outdoor exhibit space and parking area for the LVCVA’s trade show customers.

Phase Two will include the development of a new exhibit hall and its ancillary spaces on the existing LVCC Gold Lot and the Riviera Hotel property.

Phase Three will be the renovation of the existing Convention Center.

On October 25th, Finalists made public presentations for the design of the LVCC District Phase Two Expansion Project. Electronic versions of these presentations can be found at the following link Design Finalists Presentations.

Cordell Corporation is managing the project as the LVCVA’s Owner Representative.