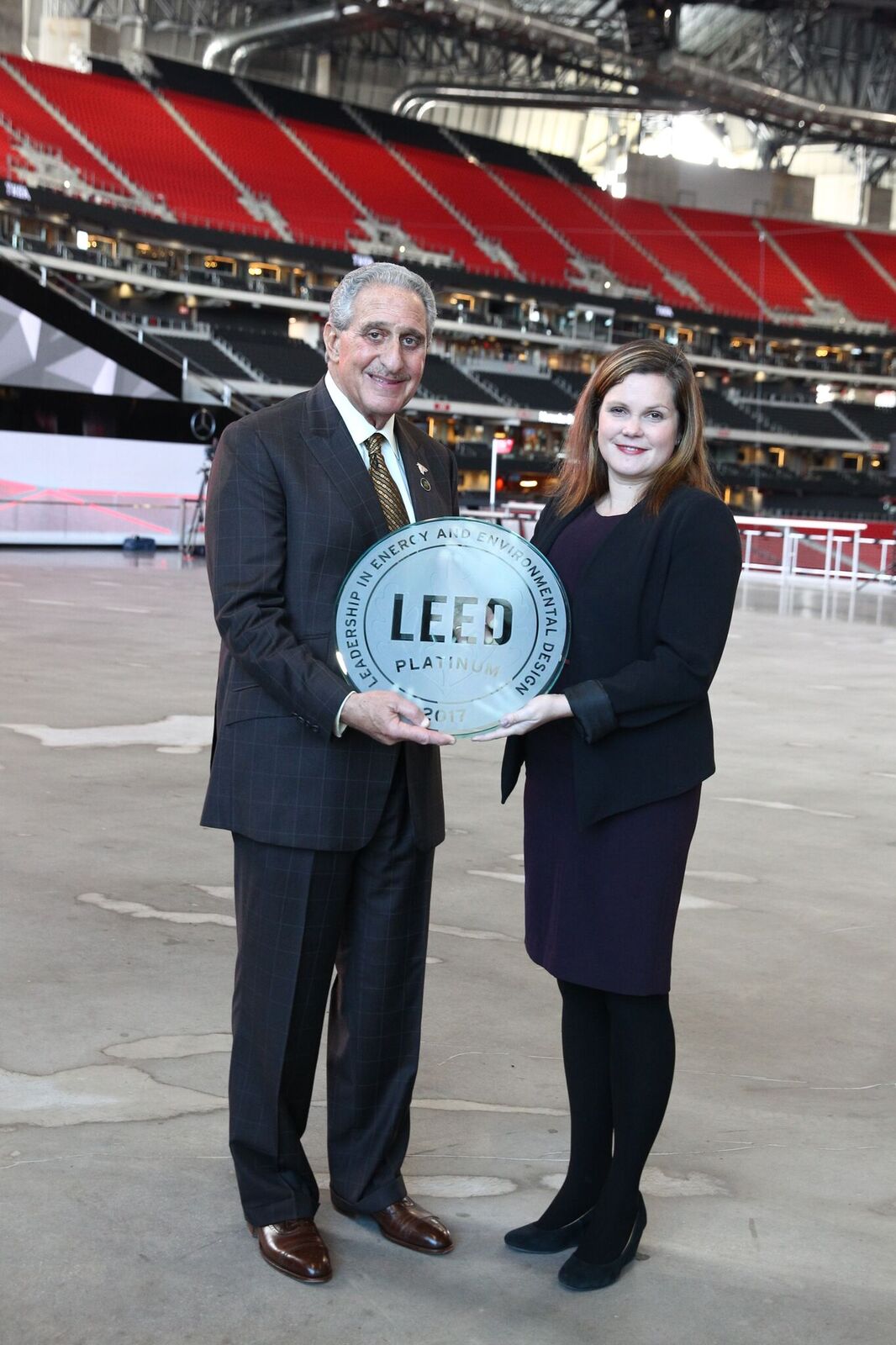 Mercedes-Benz Stadium has been recognised with LEED Platinum certification this week, marking the first time in history a NFL stadium has been awarded this certification. Created by the U.S. Green Building Council (USGBC), LEED, or Leadership in Energy and Environmental Design, is the most widely used green building rating system.

Home to the NFL’s Atlanta Falcons, Atlanta United of MLS and many of the world’s top sports and entertainment events, Mercedes-Benz Stadium is the first professional sports stadium in the world to achieve LEED Platinum Certification and has obtained more points than any other sports facility in the world with 88 total points.

Opened in August 2017, the new world-class sports and entertainment venue is renowned for its bold design and eye-catching features, however, the two-million square foot stadium’s unique sustainability solutions for water, lighting and energy conservation, as well as community programs and stewardship, have been a key part of the building’s innovation story from day one.

We set out to build a venue that would not only exceed expectations, but also push the limits of what was possible in terms of stadium design, fan experience and sustainability. We set a goal of achieving the highest LEED rating because it was the right thing to do for our city and the environment and with this achievement, we have a powerful new platform to showcase to the industry and to our fans that building sustainably and responsibly is possible for a venue of any type, size and scale. 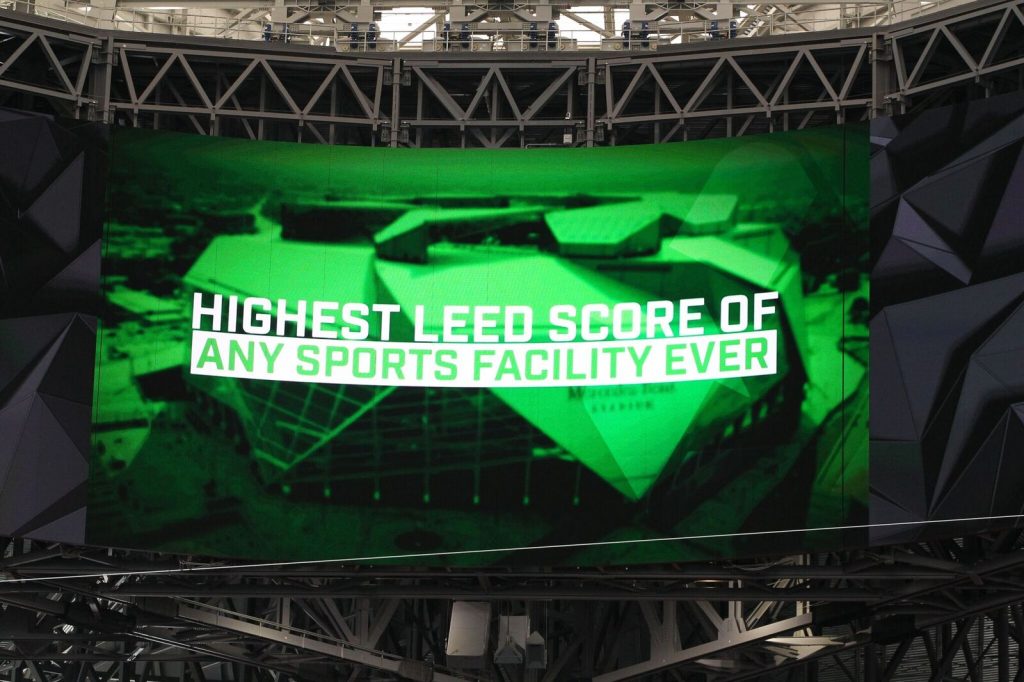 • First professional sports stadium in the world to achieve LEED Platinum Certification
• LEED score of 88 total points – highest LEED score ever for a sports venue
• First sports stadium to receive all water category credits, due in large part to a highly-advanced storm water management system
• In aggregate, Mercedes-Benz Stadium uses 47 percent less water than baseline (EPAct 1992) standards due to water-efficient fixtures and conservation infrastructure
• The stadium can power nine Atlanta Falcons games or 13 Atlanta United matches with the renewable energy generated through its 4,000 solar PV panels
• The stadium features LED lighting, which will last 10 times longer than standard lights and reduce energy usage by as much as 60 percent
• Partnership with community organizations like Trees Atlanta to share captured rainwater for tree irrigation
• Alternative transportation options – including a bike valet program on event days, EV charging stations with capacity to charge up to 48 electric cars simultaneously and new pedestrian-friendly walking paths allowing for more connectivity between communities
• Lead the NFL with the highest percentage of fans using public transportation to attend Falcons games – thanks to convenient access to public transportation (3 MARTA rail lines in 0.7 miles)
• Innovative local food production features such as: edible landscaping, an urban garden currently in development and partnership with local organizations to train Westside residents in culinary arts and help place them in living wage jobs in the industry
• Home Depot Backyard: 13-acre greenspace under development adjacent to Mercedes-Benz Stadium will offer game-day parking and tailgating, as well as arts and cultural events, entertainment and community building on non-event days

Mercedes-Benz Stadium’s sustainable design was born from the vision and commitment of Arthur Blank, who has been a leader in sustainable and socially responsible building practices in Atlanta for many years.

Blank built the first LEED Gold building in Georgia in 2004 – the Arthur M. Blank Family Office in the Buckhead neighbourhood of Atlanta, GA. Many of Mercedes-Benz Stadium’s partners made tremendous contributions to bring the vision of creating the most sustainable sports stadium to life, including MBS lead architect HOK, the stadium’s solar provider and official sustainability partner Georgia Power, and sustainability consultant, Ecoworks Studio.

By achieving LEED Platinum, Mercedes-Benz Stadium is showing fans and the larger Atlanta community that the Atlanta Falcons and Atlanta United leadership is committed to creating a space that is healthier and more sustainable. We commend Mr. Blank and his leadership team for raising the bar for their industry, creating a better experience for fans, and for helping to transform the built environment.

The building’s LED lighting and highly-efficient water and energy use and conservation strategies will also lead to significant operational savings over the long-term lifespan of Mercedes-Benz Stadium, which hosts more than 50 major events per year as well as daily public tours and private events.

A special ceremony is planned for Sunday, November 26, when Ramanujam will be presenting Arthur Blank and the project team with the stadium’s LEED Platinum plaque on the field during the pre-game events leading up to the Falcons NFC division game against the Tampa Bay Buccaneers.

Opened in August 2017, Mercedes-Benz Stadium is a world-class sports and entertainment venue in downtown Atlanta and home to the National Football League’s Atlanta Falcons and Major League Soccer’s Atlanta United. The multi-purpose stadium is host to major sports and entertainment events, including the Super Bowl in 2019, the NCAA Men’s Final Four in 2020 and the 2018 College Football Playoff Championship game and is the first professional sports stadium to achieve LEED Platinum Certification by the United States Green Building Council. Mercedes-Benz Stadium is proud to be collaborating with twelve founding partners, which include Coca-Cola, Equifax, The Home Depot, NCR, Novelis, SCANA Energy, SunTrust, IBM, Georgia Power and American Family Insurance.