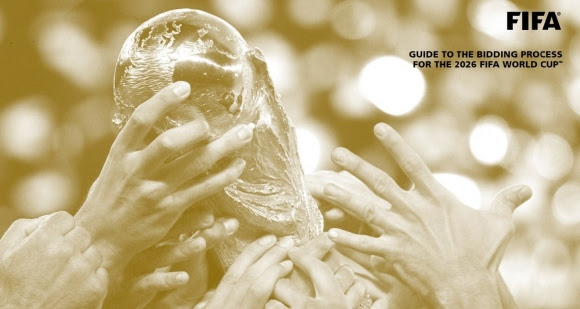 Following approval of the bidding regulations for the selection of the host(s) of the 2026 FIFA World Cup™ by the FIFA Council in Kolkata, India, on 27 October 2017, and in line with the key principle of conducting a transparent bidding process, FIFA has prepared a Guide to the Bidding Process, which is available in four languages on FIFA.com.

The Guide outlines the key elements of the reformed bidding process, the assessment mechanisms in place, recommendations on the protection of the process’ integrity, the timeline for the selection of the host(s), the specific requirements for hosting, a detailed explanation of the government guarantees, as well as the principles of sustainable event management and human rights protection.

The full set of bidding documents is available for download at the end of the Guide and will be updated throughout the process.

Download your Guide to the Bidding Process using the links below:

This follows on from last month’s FIFA Council meeting in Kolkata, India, during which the following few important elements related to the FIFA World Cup™ – for both next year’s edition in Russia and the future of football’s showpiece competition – were approved, as follows:

FIFA’s strategic body approved an increase in the prize money for the 2018 FIFA World Cup Russia™ to a total amount of USD$400m — 12 per cent up from the USD$358m awarded at the 2014 edition.

The FIFA Council also ratified the decision of the Bureau of the Council of 6 September 2017 to approve the enhanced Bidding Regulations for the 2026 FIFA World Cup™, and appointed the members of the Bid Evaluation Task Force.

According to the Bidding Regulations, the Task Force must be composed of the chairpersons of the Audit & Compliance Committee and the Governance Committee – in this case, Tomaz Vesel and Mukul Mudgal respectively – as well as a member of the Organising Committee for Competitions (Ilco Gjorgioski was appointed), together with experts from the administration: Deputy Secretaries General Zvonimir Boban (football) and Marco Villiger (administration).

The meeting in Kolkata covered a wide array of topics and saw the FIFA Council passing a number of important decisions, including the following:

· Establishment of the FIFA Foundation, with the purpose of providing a solid legal and institutional basis for FIFA’s social development initiatives. One of the core intentions of the FIFA Foundation will be to institutionalise a commitment of the FIFA Legends to engage in such activities and act as promoters of FIFA’s aims and objectives related to social development. The FIFA Foundation should be operational by the first quarter of 2018 and will initially comprise the FIFA President and two members of the FIFA Council, Sonia Bien-Aime and Kwesi Nyantakyi. Later in the year, the FIFA Council will appoint a selection of respected personalities – from football and other areas of society – as additional members of the Foundation Board.

· Decision to engage in a consultation phase to discuss a review of FIFA’s women’s, youth and club tournaments. A number of different draft formats will be submitted for discussion with the member associations at the FIFA Executive Football Summits, as well as with the confederations and other relevant stakeholders. Final concepts are planned to be submitted to the FIFA Council for approval during the body’s next meeting, on 15 and 16 March 2018 in Bogota, Colombia.

· Adoption of the International Transfer Matching System for professional women’s football as of 1 January 2018. The regulatory mechanism will enable FIFA to monitor the international movements and transfer market, bringing more transparency to the women’s game and enhancing its level of professionalism.

· Recognition of all European and South American teams that won the Intercontinental Cup – played between 1960 and 2004 – as club world champions.