Sin City takes to the ice 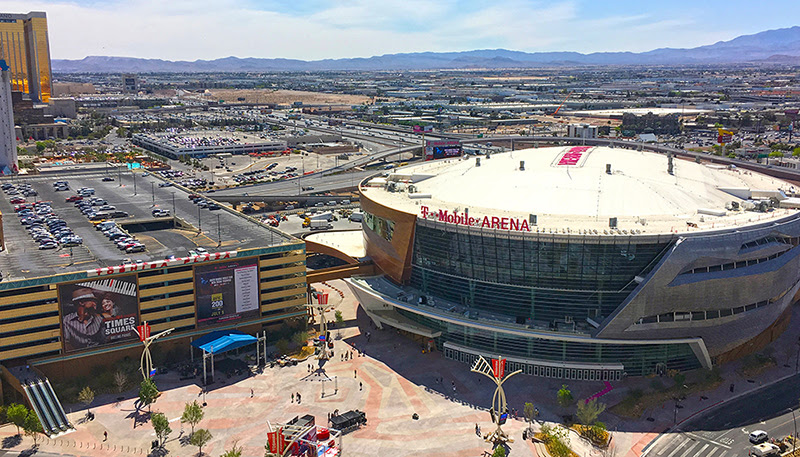 In April ’16, Wayne Newton sang “Viva Las Vegas” to welcome guests to Las Vegas’ brand new T-Mobile Arena, then in August ’17, the venue hosted “The Super Bowl of Boxing”, with the Floyd Mayweather Jr. v Conor McGregor fight, which broke pay-per-view records around the world. The facility experienced yet another milestone on October 10, when it hosted the first NHL regular season game for the city’s first and only professional sports team, the Vegas Golden Knights.

With its unique long-span roof and distinctive balcony space, T-Mobile Arena will be central to many of the marquee sports and entertainment events that help attract thousands of visitors to the city every year. Here are a few of the arena’s unique structural highlights:

The bottom of the truss cords features a large rigging grid, catwalk and platform network. The rigging grid is approximately 280 by 160ft and yields a rigging capacity in excess of 200,000 pounds, enough to support the equivalent of two Boeing 737 airplanes. There is also an empty 75-by-50ft area in the middle of the rigging grid to allow the centre-hung scoreboard to be retracted into the roof so views aren’t obstructed during end-stage performances.

A cantilevered balcony extends from the arena’s façade, rising from the main concourse to the club level. The multi-use space – used as a VIP area for club members, a venue for private parties or a viewing area for performances on a two-acre plaza below – has a slender, tapering profile that plays an essential role in the arena’s architectural design.

Since the balcony hosts outdoor concerts, one of the challenges Thornton Tomasetti encountered was how to design vibration support for a balcony with a limited structural depth that may hold everything from a silent disco to a heavy metal mosh pit. After some review, Thornton Tomaestti recommended installing five custom TMDs under the balcony slab.

Weighing up to three tons each, five TMDs were installed in very tight, confined spaces

Engineers from Thornton Tomasetti’s Swallow Acoustics team helped design, shop test and commission the TMDs, which reduce the natural frequencies of the balcony and vibrations caused by human movement. Their tests were not only successful in getting the TMDs installed in the structure’s unusual geometry, but also led to mass plate and coil spring customizations as well as a review of the damping fluid viscosities. The TMD solution also reduced the amount of truss steel by over 50 percent, a financial and sustainability win for the project team.

If You Build It, They Will Come

Originally scheduled for a 22-month construction phase, the design was fast-tracked in order for the arena to open in just 19 months. To meet the accelerated timeline, Thornton Tomasetti worked integrally with the contractor, fabricator and detailer to ensure that the more than 7,000 tons of steel was ordered and erected in time. They also provided full-time on-site representation that enabled them to offer real-time solutions to construction issues.

The end result was a timely and successful opening of the state-of-the-art arena, which just this year has already hosted the Country Music Awards, NHL Expansion Draft, Billboard Music Awards, Cirque du Soleil and a Lady Gaga concert.

When the Knights took to the ice last week, they were the first new NHL team in 17 years. While no NHL expansion team has had a winning record their first year in the league in the past 50 years, maybe the Knights – with their stylish home digs, thousands of new fans and a bit of their hometown’s notorious luck on their side – will soon experience another first: the NHL playoffs.

The post Sin City Takes to the Ice appeared first on Thornton Tomasetti.