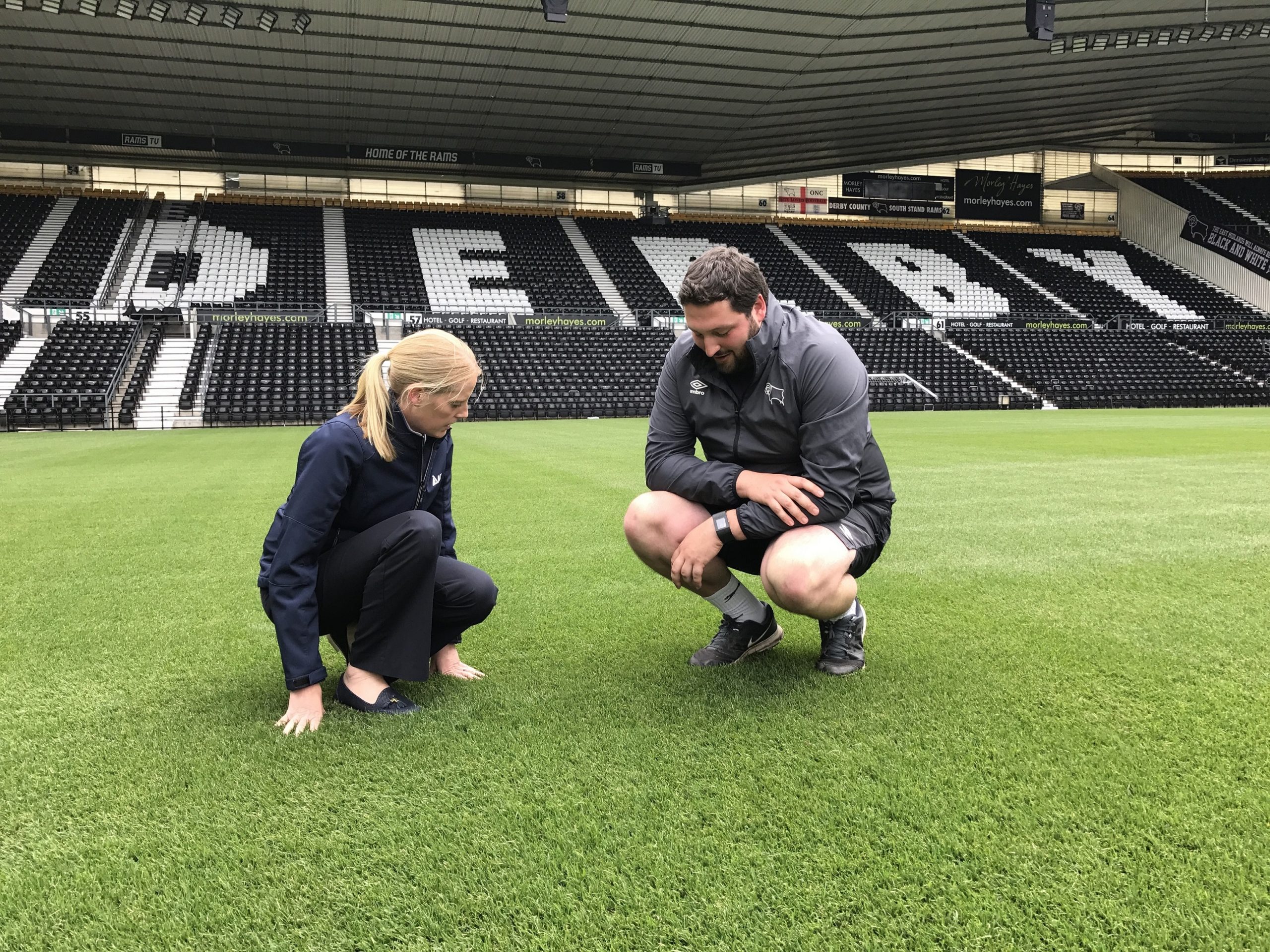 Nathan Scarff, Head Groundsman at Derby County FC, has revealed that a range of ICL products have helped him achieve his main target of hosting more games at Pride Park Stadium without compromising on the quality of the pitch.

Nathan is entering his third season with ‘The Rams’ after a hugely successful start to his current role. He was crowned the Sky Bet Championship Groundsman of the Season for the 2015/16 campaign and was one of two Head Groundsmen who were highly commended last season.

However, with the pitch at the Pride Park Stadium in arguably the best condition it has ever been, Nathan and his team won’t be resting on their laurels.

We are targeting getting more games in the stadium. In my first year here we got an extra four games on and the following season we got an extra four games on top of that. This year we are hoping to get around six extra games without compromising on the quality of the playing surface. The new pitch construction, which was installed last season, combined with quality products, has enabled us to do just this, and I’m feeling confident for the upcoming season.

Ever the perfectionist, when Nathan started his new role, he was determined to find a range of products that would be most beneficial to the pitch at Pride Park Stadium and there was only one way to find out, as he explained:

When I first started here we used four different fertilizer suppliers and monitored them based on the reaction of the plant, the longevity of the product, the value for money – in terms of the amount we needed to get the reaction and how much it was costing. We experimented for most of the year – which included trial boards in which we treated one area while leaving another untreated, and we did half pitch treatments – we carried out a number of different trials. All of the results just led us down one road – ICL.

After a season of rigorous testing, Nathan was ready to look ahead to a new season in which he would incorporate a range of ICL products into his turf maintenance programme.

During the renovation period and immediately after seeding, I’ll use a tank-mix consisting of Qualibra and SeaMax – just to get the best possible germination and early establishment. Four weeks later we will verticut and overseed to get any little gaps that may have been missed, particularly in the areas where we struggle to get any sunlight, and then we’ll add another application of Qualibra and SeaMax.

The unique combination of SeaMax and Qualibra work together to give turf the best possible start. Qualibra – a wetting agent, creates ideal soil and turf rooting conditions to make better use of available moisture and irrigation. Particularly beneficial during the growing-in period, Qualibra achieves great results when applied to the seedbed to accelerate the germination and establishment of new seedlings. Complimenting Qualibra is Sportsmaster WSF SeaMax from ICL. Boasting over 75% of active seaweed content, SeaMax has been proven to significantly improve turf colour and quality.

Independent trials have revealed that SeaMax helps the plant produce longer roots, a greater root mass and improves the quality of growth.

Following the growing-in period, when we get to the four or five week stage, we start to apply a tank-mix consisting of Primo Maxx, Vitalnova Blade, Sportsmaster WSF soluble fertiliser and SeaMax. We will continue to apply this mix every three weeks until October or November depending on how the weather goes for us. We then pick it up again in February or March and continue until the end of the season.

Towards the end of last season, I applied ProTurf 20.0.7 , which I had never used before, and I remember calling Emma Kilby (ICL Technical Area Sales Manager) asking why she hadn’t pushed me harder to use it! She had previously recommended it before but for some reason I didn’t go ahead. She always offers me superb advice and I guess it shows that she’s not a pushy salesperson but this product is the best fertilizer I have ever used. It was fantastic and the benefits of the Polyhalite with the calcium and the magnesium were amazing – especially on a pitch that is naturally going to leach those nutrients more quickly. The longevity we got out of it was excellent, the reaction was brilliant and the value for money was exceptional too.

As Nathan looks to continue his successful start to life at Derby County FC, it appears that he has no regrets over his choice of products:

I had pretty much a full season to try and figure out the correct products to use on this pitch and I’m there now. For me, I’m not going to jump head first into a full-on programme on a basis that data from somewhere else is really good. It’s got to be my research and my trials, and my data showed me that ICL is the way forward for us.