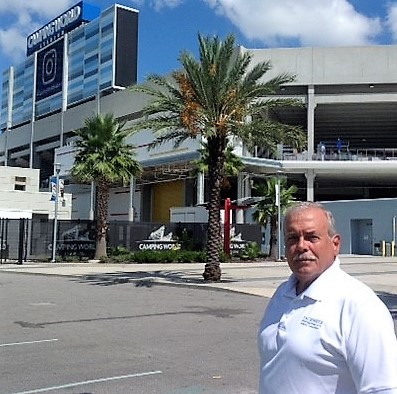 In his latest industry blog, retired FBI agent and security expert, Peter D. Yachmetz, discusses how ‘soft targets’, such as sporting and entertainment venues, can protect themselves against the very real threat of modern day terrorism.

The terror threat facing today’s law enforcement and individuals charged with special event security is more sophisticated than in previous generations. Terrorists can operate alone and/or in concert with an underground cell capable of causing immense destruction and devastation. And they can easily disappear … “not” just leave a neighborhood, but cross border states and flee a country. While the FBI and their law enforcement partners do what they can to ensure safety, it’s an informed proactive public making observations and recognizing suspicious circumstances that will be vital to thwarting the next attack. Situational awareness and a cooperating public … reporting unusual conditions that deviate from the norm … are law enforcement’s best chance to identify a threat and thwart the next attack. Looking for evidence of terrorism, individuals charged with special event security need to have a robust campaign reminding the public their safety requires vigilance.

Terrorists usually engage in “telltale” betraying behaviors, prior to launching an attack. Not unlike a gambler who scratches his/her nose when making a “bluff,” these behaviors or “tells” are detectable. Being observant and/or familiar with your surroundings can be helpful to law enforcement. Terrorism experts suggest large venues should constantly run ad campaigns telling the public, “See something … say something.” Law enforcement people call it, “Situational Awareness.” Organizing and planning an attack, all terrorists leave “tells.” Taking a moment to analyze your surroundings, reporting things outside the norm, might be society’s best chance to thwart an attack. Unless the would-be terrorist conceals their tracks, someone skilled in “situational awareness” might very well detect their efforts.

Looking for a “soft” target, terrorists hope to find venues with little or no security precautions, easy access and big crowds. Analyzing targets terrorists look for associations and opportunities “missed” by security experts, hoping to take advantage of an overlooked vulnerability, wanting to quantify a site’s economic impact per chance they’ll successful, and/or ascertain whether it has any symbolic value providing vital life services. Add the element of surprise. “Soft” targets are tough venues for authorities to secure, particularly since they’re so many locations where an explosive device can be concealed. Typical “soft” targets include sport stadiums, special events, corporate meetings, music concerts, theme parks, airports, transportation centers, hotels, bridges, subway systems and shopping malls. Their availability and number suggest as a security strategy, venues should promote/use ad campaigns talking about “situational awareness,” reminding the public they are the best defense against a terrorist attack, e.g. “See something … say something.”

Anytime you have a publicized special event or soft target venue where authorities think the intent, motivation and capacity to inflict harm “exists” the public should be forewarned the threat level is “high.” To get the publics’ help they need to be informed about the threat. Alerting guests, giving them an active role in their security, exponentially makes a venue safer. Likewise, not having an established security plan, exponentially makes a venue less safe. Waiting for a terrorist to walk up to a venue wearing a suicide vest and/or flashing an AK47, authorities can only “react” to a threat versus implement a plan … leaving precious little time to resolve an incident safely.

As discussed in my previous blog, a terrorism incident has an “immediate” detrimental impact on a company’s bottom line, bringing with it “not” only unwanted media attention, but dramatic economic consequences such as lost attendance and declining revenues. Proactive awareness and security planning done correctly mitigates impact. Planning for a high-profile event, security professionals need to combine liaison, LE intelligence, experience, technique and resources with pre-emptive procedures … all designed to mitigate the consequence of an attack.

Recognizing “bad” actors along with “indicators” of planning an attack is key to thwarting the next terrorist attack. Identifying and arresting terrorists, uncovering terror plots, assessing and evaluating potential soft targets, security experts utilize expertise and techniques to recognize specific signals of a planned incident including:

FUNDING – Investigators need to be alert for individuals conducting suspicious financial transactions, including deposits, withdrawals, use of pre-paid debit cards, numerous credit cards in different surnames, unexplained wire transfers or donation schemes meant to generate unusual sums of money which may be used to fund the purchase of explosive materials.

UNIFORMS, BADGES & OFFICIAL VEHICLES – Investigators need to be alert for individuals stealing uniforms, badges and/or official vehicles to gain access to secure areas and/or deceive personnel during an attack.

SITUATIONAL AWARENESS – Like the public investigators need to be alert for behavior, expressions and actions suggesting an attack. Awareness can thwart a terrorist incident. Recognition of these indicators can mean the difference between a catastrophe and a “stand down” transmission.

Or visit The Yachmetz Consulting Group, LLC’s website at: www.YachConsultGrp.com