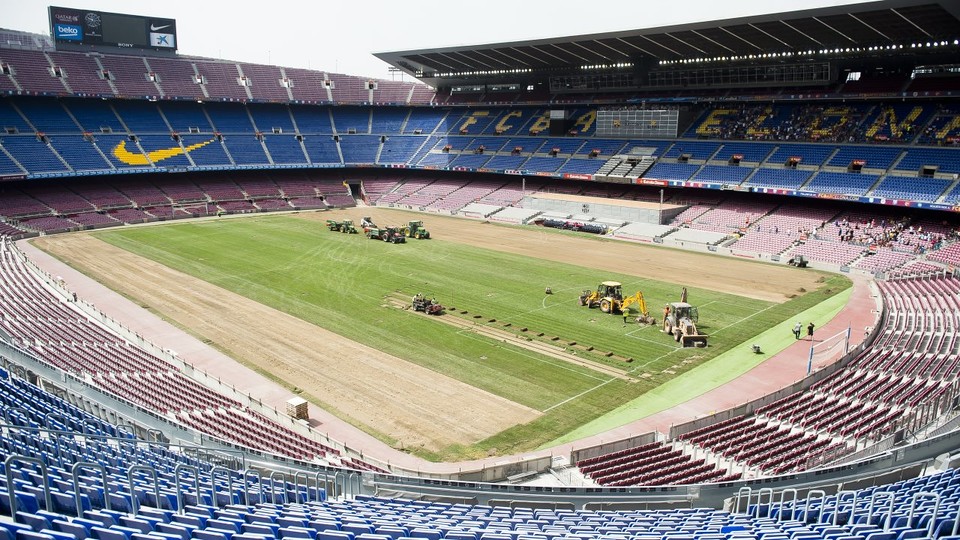 FC Barcelona has once again renewed its trust in GrassMaster by Tarkett Sports for the pitch in their iconic Camp Nou Stadium.

GrassMaster is a 100% natural grass pitch reinforced by 20 million polypropylene fibres. The fibres are injected 18 cm deep and 2 cm above the surface, approximately every 2 cm across the pitch. The reinforced natural grass system had previously been installed at Ciutat Esportiva Joan Gamper, the team’s training centre.

After years of studying the options to upgrade their field, FC Barcelona opted for Tarkett Sports’ GrassMaster, which combines natural grass with synthetic fibres to provide an all-season consistency. The system had been tested at the club’s training centre and then installed on several fields of the Ciutat Esportiva, including the Camp Tito Vilanova, the First Team’s main training pitch.

FC Barcelona are re-laying a new pitch after its extensive use during the post-season as many events are held on the grass of the legendary Camp Nou Stadium.

The ingenuity of the system lies both beneath and above the surface: the natural grass roots grow around the fibres, thus anchoring the field. The hybrid system ensures an always even and stable surface.

Other prestigious stadiums in Europe also chose GrassMaster this summer: the Stadio Giuseppe Meazza in Milan, for example, is installing the reinforced natural grass system for the sixth time.

Watch a video of the installation online at: https://www.fcbarcelona.com/club/news/2016-2017/camp-nou-begins-process-of-changing-to-hybrid-grass-playing-surface

It has been another busy summer at Anfield after the completion of the new Main Stand last year and the Reds are now preparing themselves to play their 2017-18 English Premier League (EPL) and European campaigns on a brand new GrassMaster pitch.

The Reds will indeed play their home games on a brand new surface. The last installation of a GrassMaster pitch at Anfield was 16 years ago. The hybrid system offers a uniform and visually attractive surface with a proven lifespan of more than 15 years. Natural grass roots grow around the PP fibres, thus anchoring the field and ensuring an always even and stable surface. This results in a consistent playing surface with outstanding stability, a perfect fit for a club looking to play long EPL and Champions League campaigns.

Liverpool FC have also used this technology during the last seasons at the Melwood Training Ground.

A pioneer in hybrid grass technology since 1989, GrassMaster, previously known as Desso GrassMaster, was developed to reinforce the durability and lifespan of natural grass pitches for sports such as football and rugby. Over time, GrassMaster, now part of Tarkett Sports, has become the world’s leading innovative stitched pitch technology with more than 650 references worldwide.

Find out more by visiting:http://www.dessosports.com/hybrid-grass