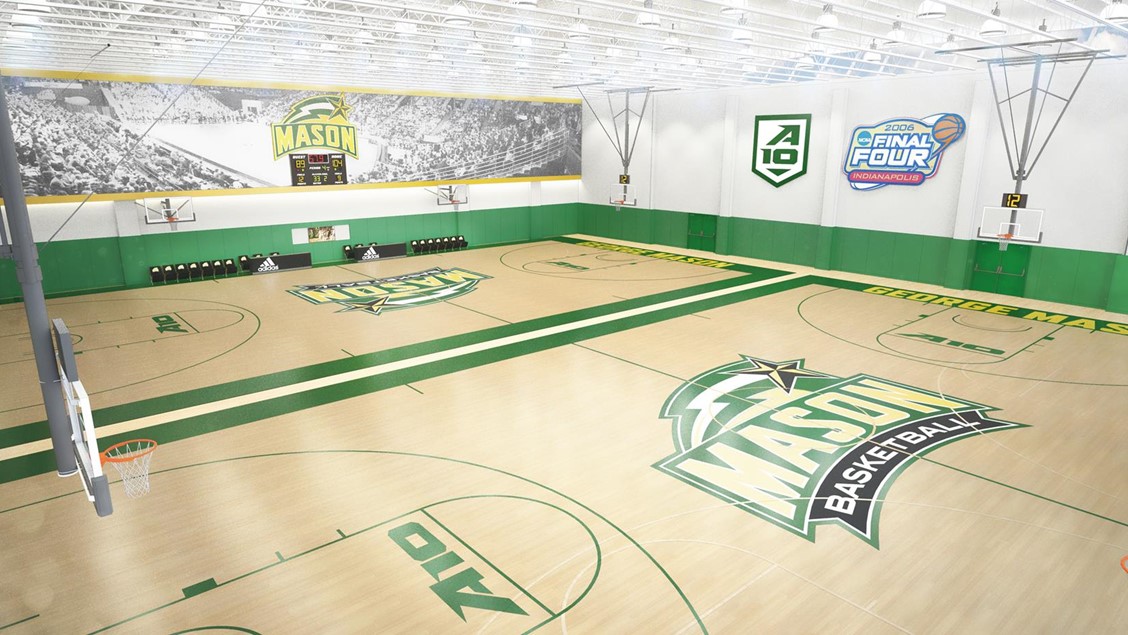 Assistant Vice President and Director of Athletics, Brad Edwards, has announced that construction of the dedicated George Mason University (GMU) Basketball Practice Facility commenced on June 1, as part of Phase I of the Basketball Excellence Plan to enhance recruiting and student-athlete development.

The Basketball Excellence Plan, which also includes a complete overhaul of the teams’ locker rooms at EagleBank Arena, is an important step toward making Mason more attractive for top recruits within the increasingly competitive national landscape.

A leadership gift of US$275,000 from George Mason longtime supporter, Kathy McKay and her family, and commitments from other Patriots donors, enabled Mason to fund the project. In gratitude of the lead gift, the basketball practice court, as well as a locker at EagleBank Arena, will be named after the McKay Family.

Although we haven’t yet realized the entire fundraising goal, we have hit the threshold to begin construction, which is more than 50 percent of the total budget. It is critical that we have the practice facility project completed before the start of the basketball season in November. In the basketball-driven Atlantic 10 Conference, it is imperative that our basketball teams have a dedicated space to develop and compete.

This kind of infrastructure improvement is critical, because the success of our basketball program ultimately provides increased exposure opportunities that are necessary to recruit prospective students to George Mason. This national recruitment supports the growth of our institutional research mission which ultimately strives to increase prosperity and improve quality of life in Northern Virginia.

The “Cage Gym” in the Recreation Athletic Complex (RAC) will undergo a comprehensive, US$1m renovation that will include significant enhancements to the existing space, including the installation of new hardwood courts, new lighting, six basketball goals, video capabilities and George Mason Patriots branding.

The 15,000sq-ft space will feature a Robbins MVP Hardwood surface that will span the size of two basketball courts, which includes a full centre court surrounded with two half courts on both sidelines. Robbins Sport Surfaces supplies hardwood courts for 90 percent of NBA teams’ competition and/or training facility floors.

In addition, all of the baskets are replicas of the EagleBank Arena basketball goals used for all home games. A lighting system will replace the existing lighting in the “Cage Gym” that will exceed NCAA recommendations by 25 percent. New Musco Lighting will be installed at EagleBank Arena as well, allowing for an improved game day atmosphere, before the start of the 2017-18 basketball season.

Over the first few years of the strategic vision, the department has generated more than US$20m in revenue contracts and commitments, highlighted by a naming rights deal for EagleBank Arena, a multi-year partnership with adidas and a long-term corporate sponsorships agreement with Learfield. In addition, the department has secured a multi-year sports performance partnership with Vivature and has benefitted from over US$4m in generous gifts from Patriot Club supporters.

The next step in the Basketball Excellence Plan, Phase II, will consist of complete design and construction of an addition to the Basketball Practice Facility. The scope of the project includes adding locker rooms, training and sports medicine performance areas and offices for the coaching staffs.

The construction for the basketball practice facility was awarded to Alta Vista Construction.

Also included in Phase I of the Basketball Excellence Plan is a US$1.2m complete overhaul of the basketball game day locker rooms in EagleBank Arena, the home for men’s and women’s basketball games since 1985. The architectural design of the project has been awarded to Colley Architects, PC from Blacksburg, Virginia. The scope of the locker room project is to enhance the facility with new lockers and benches, a team lounge, a film room and upgraded technologies. The targeted completion date is scheduled for the opening of the 2018-19 season.

With the current landscape of budgets and funding, the basketball redesign abides by the university’s vision of creativity in using existing resources with respect to cost. The renovation of “Cage Gym” represents a cost savings of approximately US$13m when compared to the establishment of a new stand-alone facility.

For more information on how to make a gift in support of this project, visit gomason.com or contact the Patriot Club at Tel: +1 703.993.3217 or email jmontgo2@gmu.edu.

Naming opportunities located within the project are still available.