Dresden to be home to world’s first Suprastadio 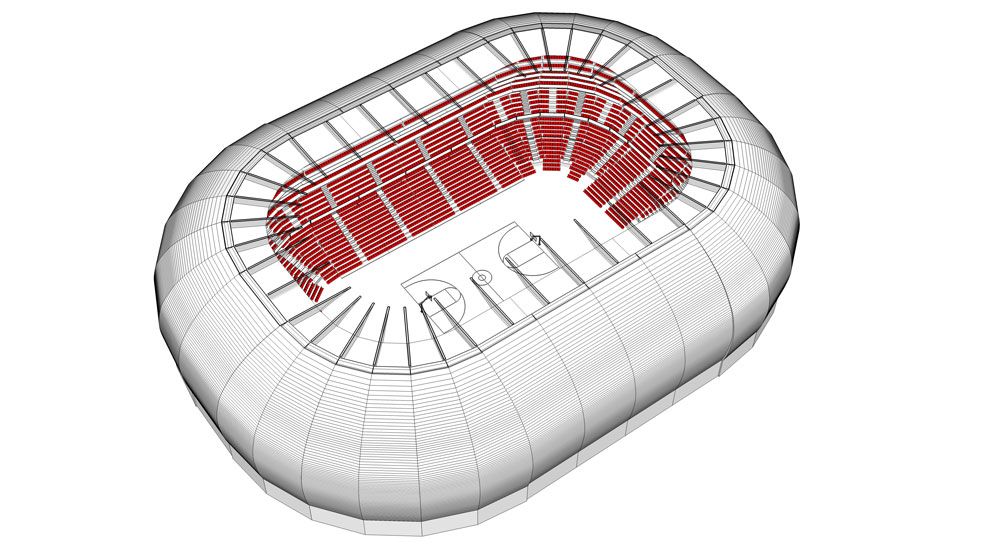 Dresden will be ‘home’ to the world’s first ‘Suprastadio’, with the expansion plans of DDV Stadium employing the radical design concept introduced by the German architectural firm Interpol. Contractor BAM Sports GmbH has teamed up with the architects and will build the first grandstand using the new concept at the DDV Stadium, as reported by Coliseum.

Suprastadio translates into an entirely different way of building a stadium that really does break the mold. The designers have come up with a unique way to seat spectators that is more compact and efficient. If one were to look at the Suprastadio from a cross-section perspective, the shape of the stands would very closely resemble that of a vast wave, wrapping the field of play.

The first feasibility study of DDV Stadium’s expansion plans, prepared by BAM, includes the key highlights of Suprastadio. As per the new design, the most important fact is the ability of the stadium to be extended by over 13,000 additional seats, 13,709 to be precise; this will see the capacity of the stadium rise to 45,000, including a new Business Club, as Managing Director of BAM Sports GmbH, Axel Eichholtz, advised during his presentation at the Coliseum Summit EUROPE conference back in March.

Eichholtz also advised that the Suprastadio design requires new, specially-designed seats, for which they have employed the experience and know-how of Nowy Styl.

The expansion will be delivered using new levels on three sides and through the creation of 20 new boxes, with additional VIP areas, and will include the relocation of the team and press pavilions.

An increase of 20 seat rows is planned. In the K-Block, there will be 4,708 standing places. The regular seating for SG Dynamo Dresden fans will increase by 6,164 seats. 600 new seats are planned in the VIP area. In the guest/away fans block, it is expected that around 2,237 standing places will be offered.

It is believed that the new Suprastadio design enhances the experience of fans, as it makes the stadium more compact – the distance from the terraces to the pitch is cut drastically, so much so that the seats at the very top may be just as sought after as the seats lower down.

According to the feasibility study, the grandstands are extended to the south, west and north. The glass front towards Lenné Street will not be touched. The planning is so detailed that the expected shading of the stadium in the direction of Arnhold-Bad was investigated. This could be the increase in the curves (left) and the long sides of the grandstand (right).

The new grandstands will not be placed behind the ranks, but rather staged as a second rank slightly forward in the direction of Spielfeld.

The project is expected to cost in the region of €25m.

About ‘Suprastadio’: The next generation of stadiums with a new concept

Interpol Architecture has come up with a truly innovative approach with this stadium design.

Suprastadio is the name given to a unique new stadium design; it is a completely different way to build a stadium that really does break the mold. The designers have come up with a unique way to seat spectators that is more compact and efficient. If one were to look at the Suprastadio from a cross-section perspective, the shape of the stands would very closely resemble that of a vast wave, wrapping the field of play. This unique design is an exciting new development in an industry that has largely, not changed the way stadiums are built.

The history of stadiums can be traced back directly to the clever ancient Greeks who were the first to create an amphitheatre. This was needed so as to create a comfortable setting in which to hold their great polemic tragedies and of course their famous comedies. This was taken a step further by the Romans who made their stadiums more rounded by basically putting two amphitheaters together to create the world’s first stadium or coliseum, so to speak.

Ever since then, designers and engineers have always battled with how to get people into a stadium without compromising the viewing quality. Bad viewing angles and physical obstructions such as low beams and columns for the roof are largely a thing of the past for modern stadiums. However that doesn’t necessarily guarantee that a spectator sitting near the back will get the same viewing pleasure as someone sitting near the field of play.

From the fans’ perspective, it is crucial to be as close to the action as possible, this is because fans want to get a good understanding of how the play unfolds and want to see the crucial phases in the game. This is why the tickets have a certain pricing structure, seats closer to the action cost more and logically therefore, seats further away cost less. Fans often rush to try and get the best seats possible because nobody wants to be seated in “row z”, squinting frantically for a better view. There is nothing worse than waiting to buy tickets to an important game and then finding out that the only tickets available are at the very back of the stadium.

With the Suprastadio design, the distance from the terraces to the pitch have been cut drastically, so much so that the seats at the very top may be just as sought after as the seats lower down. Previously the maximum distance for a spectator from the pitch was 72m, with Suprastadio however that has now fallen to just 51m, this means that just 3% of spectators are now sitting further away than 50m!

The over-all size of the ground is also a lot smaller which means it’s perfect for any city that may contemplate building a stadium in a small space.

From the players perspective the benefits should be immediate, the 12th man effect will be even more pronounced as the visiting team will literally feel the fans hovering over them and intimidating them with their support. Certain stadiums have developed nick-names such as “Fortress Twickenham” due to their daunting atmosphere and this certainly does have a psychological impact on visiting teams.

In football/soccer for example, the acoustics are very important. In the planned design and engineering of Suprastadio, acoustics are not only conducive to communication between the fans in the different tiers but also to the interaction between the fans and the teams. The openings between the upper tiers that are inherent to the system of Suprastadio allow for good acoustic coupling – and the transfer of the fans’ mood between the tiers. Thanks to the reflections along the vaulted roof, the sound is transferred nicely from tier to tier.

Since, as a general rule, the direct sound level decreases fairly considerably with increasing distance, the transfer of the mood wanes significantly the further back the seats are. Therefore having the fans much closer to the sidelines in the Suprastadio compared to other stadiums is a significant advantage.

Significantly less ground space is required for building the Suprastadio. By staggering the spectator tiers from about the middle of the spectator rows on back towards the pitch, less space is needed compared to conventional grandstands. Due to the economy of space the grandstand system is ideal for inner city areas. It offers a range of diverse uses for the periphery of the stadium as well.

There exists no such thing as a bad seat in the Suprastadio. Spectators can watch the game from a newly gained proximity. The Suprastadio ensures a significantly better and more “direct” view as the distance to the playing field is now reduced for half of all spectators, and almost cut in two for the rows all the way in the back.

All spectators have an optimum, clear view of all the action below. The fact that the upper tiers are staggered forward, in combination with the increasing height of the structure, makes the viewing angle ever steeper so that is becomes more and more of a top view (a view from above) of the action – contrary to conventional stadiums, where a match is mostly seen from a side angle. It is an entirely new angle on the game – normally only captured by cameras in modern broadcast coverage.

The newly gained views are complemented by a closed soundscape, offering new opportunities for interaction between spectator tiers and the teams on the field. An impressive human wall created by thousands of fans can surge undisguised and at close range to the game. Spatial proximity and intensity of mood transform the stadium into a seething cauldron.

This innovative, out-of-the-box design has already been unveiled in Germany, with the German media giving it a big thumbs up, and, internationally speaking, Interpol Architecture chose the Coliseum Summit, the leading global knowledge-sharing platform for the stadium and arena industry, to unveil this new design at the European event back in March.

The Suprastadio is a new design and the many positive aspects will only increase enjoyment on match days for players and fans alike. Suprastadio can also be built in a smaller scale for small venues as well as big ones. Not only can the Suprastadio be a permanent structure within a city but can also be temporary, with its modular design, making this a clever and versatile building for a variety of stadiums and arenas.

Coliseum is a global series of stadium and arena business conferences and a sports venue news online-platform dedicated to the various challenges of designing, constructing and operating of sports venues all around the world. Sports Venue Business (SVB) is proud to be a supporter of Coliseum and its events. For more information on Coliseum, go to: http://www.coliseum-online.com