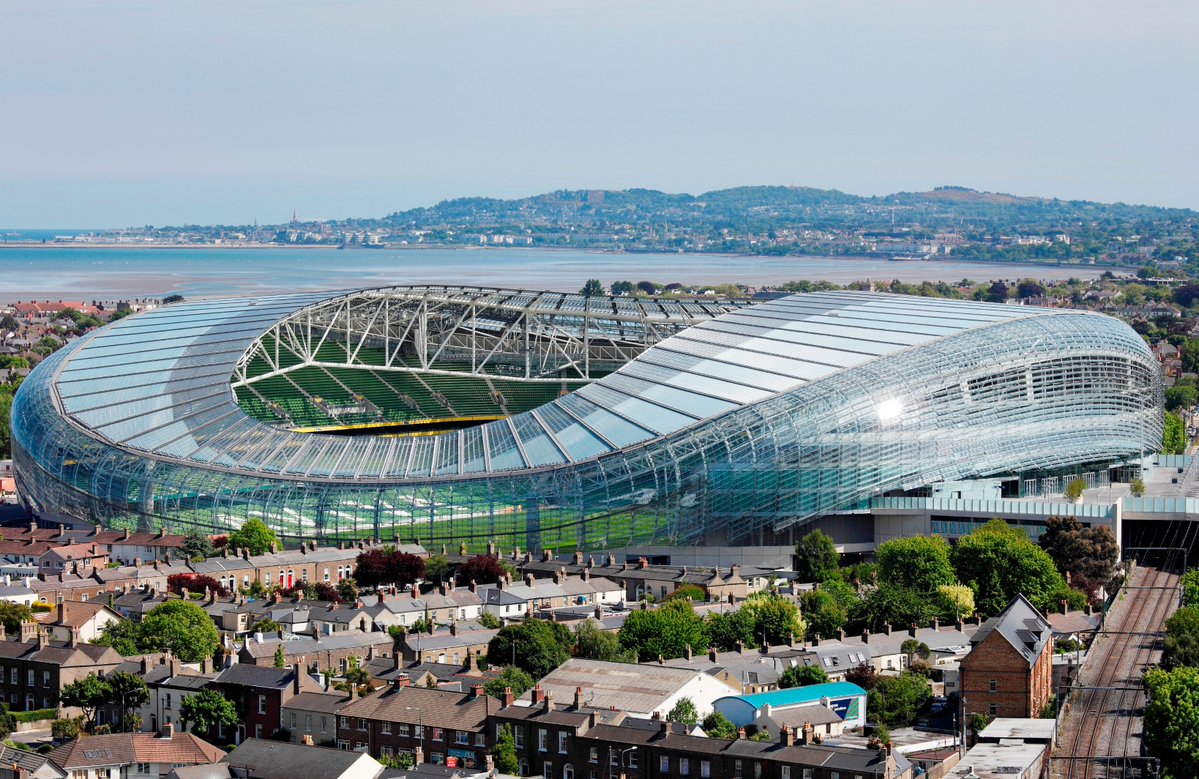 Sports Venue Business (SVB) CEO, Katie McIntyre, discusses the operational challenges of running Dublin’s 50,000-seat Aviva Stadium with Stadium Director, Martin Murphy. The venue is ‘home’ to both the Football Association of Ireland (FAI) and the Irish Rugby Football Union (IRFU), as well as playing host to a variety of events, from exhibitions and conferences to major pop concerts and American Football.

What are the main challenges when it comes to managing and operating a multi-sport, multi-purpose venue such as this one?

We run roughly 20 events a year at Aviva Stadium; international football and rugby, plus concerts. The biggest challenge we have as a venue is maintaining and managing our main asset, the pitch, and keeping it at the quality required for international football and rugby. This means aiming to get the balance right by trying to minimise the activity that happens on the pitch; this is the biggest challenge that we have.

Talking about the pitch, 3G and 4G sports turf is increasing in popularity, particularly in the training facility environment. Can you see yourselves opting for this at any stage?

International rugby hasn’t really gone to artificial pitches just yet but it’s only a matter of time before that happens. If you look at the United States, where artificial surfaces are almost the ‘norm’, they lend themselves to multi-sport, multi-event practices, as it’s easier to maintain and allow more events on the pitch. There’s a fine balance between the traditional argument for natural turf and the latest grass technologies. The main thing for us, is that international soccer is not yet played on artificial turf surfaces, so Aviva Stadium won’t be converting to 3G any time soon. We are more than happy with our Desso GrassMaster hybrid system.

How are you optimising revenue generation at Aviva Stadium? And what kinds of innovative technologies, solutions and services are you employing?

We are a multi-purpose stadium, but our main revenue comes from the 20 international soccer and rugby matches that we host annually. We’d like to expand that and have already welcomed events like American Football and want to attract three pop concerts a year; which we’ve unfortunately not managed in recent times. We also want to grow the number and type of events that we host here. Our non-matchday activities are significant, with 700 events held at the stadium each year. As a city centre location, we’re also ideally placed for conferences and such events.

What were the main challenges you’ve had to face and how have you overcome them?

The thing is, when you’ve got a new stadium, everything is brand new. But soon you have to start thinking about the lifecycle of the stadium, from replacing the technology, carpets and such, to maintaining the venue. We’ve had to start implementing some of those changes already in the stadium. Our servers and IT have had to be completely revamped and inevitably we’ll have to revamp them again in another 5 years’ time. A lot of the big pieces of equipment that we have, have a 10 year lifecycle, so with the stadium already 7 years-old, these are things we have to start thinking about replacing in the near future.

Aviva Stadium was the backdrop for the ‘Clash of the Titans’ game, which saw Ireland take on old rivals England in the final game of the RBS Six Nations. Then, within a matter of days, the venue hosted not one but two major soccer games, first with an Ireland v Wales qualifier, followed just a couple of days later with an Ireland v Iceland friendly. When it comes to Safety & Security, how fluid does your plan have to be and does it need to take into consideration the different types of fans?

For every event, whether rugby or soccer, we always conduct threat and risk analysis. It varies across the different events, even from concert to concert there’s a different crowd profile. The key is to look at each event in isolation. We work very closely with the police; taking an inter-agency approach. We have good communications and work very well with the police to create a profile for each event and to plan accordingly.

My previous experience in the army taught me to plan and make decisions, which I’ve certainly been able to bring with me into the sporting spectrum and running the stadium.

As the home of both the FAI and IRFU, how do you ensure all stakeholders remain happy?

Obviously the different stakeholders have different needs, so it’s a matter of cooperation. The FAI and IRFU are joint owners of Aviva Stadium, and yet the stadium is a different entity in its own right too, so the three parties have to work together to ensure everything works efficiently and effectively for all the stakeholders. There’s always give and take, and compromise, but it’s worked very well for the last 10 years and it’s a good model. I also feel that both the FAI and IRFU have benefitted from cooperating with one another on hosting major events at this great stadium.

Knowing the ins and outs of hosting both soccer and rugby games, is there anything that either code could learn from the other?

I think they do. It’s not just isolated to rugby and soccer, we also learn from concert promoters and the various acts that come to the stadium. So we’re constantly reviewing how we operate and looking for new ideas. Those ideas are shared; there’s a lot of collaboration between the two sports organisations. We learn from each other. There are different profiles of spectators, different cultures and experiences, but ultimately they are all here to enjoy their experience; and to be entertained – whether it’s soccer, rugby or a concert – in a safe and secure environment.

What have been the key lessons learnt from Aviva Stadium’s hosting of large-scale sporting and music events over the last decade?

I’ve learned a lot and I’ve had to learn a lot. I think you’ve got to open your horizons and look at what other people are doing. I’ve undergone a number of courses from a business point of a view. I’m also keen to learn from other venues and from other sports to see what we can introduce that might be of benefit to the company and our stadium.

It’s invaluable, as are publications like your own Sports Venue Business platform. It’s forums like that where we can learn from one another. On occasion, venues are competing with one another, but by and large we work in isolation of one another, so there is no threat in sharing information. I think it is incumbent on all of us to try and improve our spectators’ experience. Working together, we can do that. Everybody has a different view and a different idea that we can all learn from.

How important is it for Facility Managers to optimise the fan experience at their stadiums or arenas?

My view on that is that we’re actually competing with our own product. The supporter can decide to watch at home or come to the venue. So our job is to get them to make the decision in favour of coming to the venue. That’s means we’ve got to match the comfort, the safety and the secure environment that they have at home in the stadium, and also provide them with top-class entertainment. The unique thing about the stadium experience is the whole social interactivity and that electric atmosphere that comes only from being in the crowd in a packed stadium, which you can’t get at home. So we’ve got to try and make it attractive for people to come from the comfort of their own home, where they can watch the event on TV, to share the experience at the stadium.

In terms of actually enhancing the fan experience, we’re going to be adding two new screens. As those familiar with the Aviva Stadium will know, it’s lower at the north end, so our screens are offset. We have one on the east side and will put one on the west. They are going to be very high quality, high definition, and we’ve just signed a contract with Daktronics to put them in over the summer. That’s part of enhancing the venue, continuously investing in the venue and trying to improve the spectator experience.

Stadium safety and security is also another area where money must be invested. It’s something that owners don’t always think about and it’s not something that spectators can necessarily see, but it is vital in ensuring a safe and secure environment.

Safe standing has become a hot topic of late. What are your personal views on this and could you see this being brought in at Aviva Stadium at any point?

Rugby has no problem with safe stadium and our neighbour, Croke Park [home to the Gaelic Athletic Association/GAA], has a big standing terrace, Hill 16. Obviously we’re guided by the UK’s Green Guide, but personally I’m a big fan of safe standing, as long as they’re properly designed. I’ve been to the Allianz Arena in Munich and many other German stadiums, where safe standing works very well. I think standing areas in a stadium can actually enhance the experience. Although I couldn’t see stadiums ever being completely standing or even having the full lower tiers standing, I could see certain sections for safe standing working very well.

The above interview first appeared on Soccerex.com.

On the conference side of things, the last time we were together was at the ESSMA Summit at Parc OL in Lyon, when Aviva Stadium was awarded the 2018 ESSMA Summit. How important is it to win industry events such as these?

The annual ESSMA Summit is an important event for us to win, as it means we will be bringing our peers to the stadium. We were very pleased to be announced as the winner. It will be great to show off the stadium, which is 7-years old, but still relatively new, and talk about the challenges that we’ve had along the way.

And finally, last month saw the World Rugby Technical Review Group complete its visits to the three host candidate countries (France, Ireland and South Africa) bidding for the Rugby World Cup 2023 (RWC 2023). Obviously this included a tour of Aviva Stadium. Can you give us any insights as to how you feel this went and tell us what it would mean to win the rights to host the event, both for Ireland and indeed the stadium?

We were very well prepared for it. The bid, under Kevin Potts and the IRFU, is really taking shape and a lot of work has been put in. No stone has been left unturned. The visit went well from our point of view and hopefully from the Review Group’s! It would be wonderful to get the RWC 2023. Obviously we have EURO 2020 matches coming to Ireland too, which is another fantastic event. The proof of having a stadium like this is that you can attract events like that. We’ve also got the wonderful 80,000-seat Croke Park stadium in Dublin, and Ireland certainly has the quality venues and the accommodation needed to host such large-scale events. There’s a real team effort going into this RWC 2023 bid, both from Northern Ireland and the Republic, it’s a combined effort. So we’ll certainly be keeping our fingers crossed for a good result come November 2017!

For the full video interview with Martin Murphy, which also covers Sustainability, and some of the other current industry trends, go to: http://sportsvenuebusiness.com/index.php/youtube-gallery/big-interview-martin-murphy-stadium-director-aviva-stadium/

Sports Venue Business (SVB) is proud to be an Official Media Partner for both ESSMA and its members, as well as Soccerex and its events in 2017.