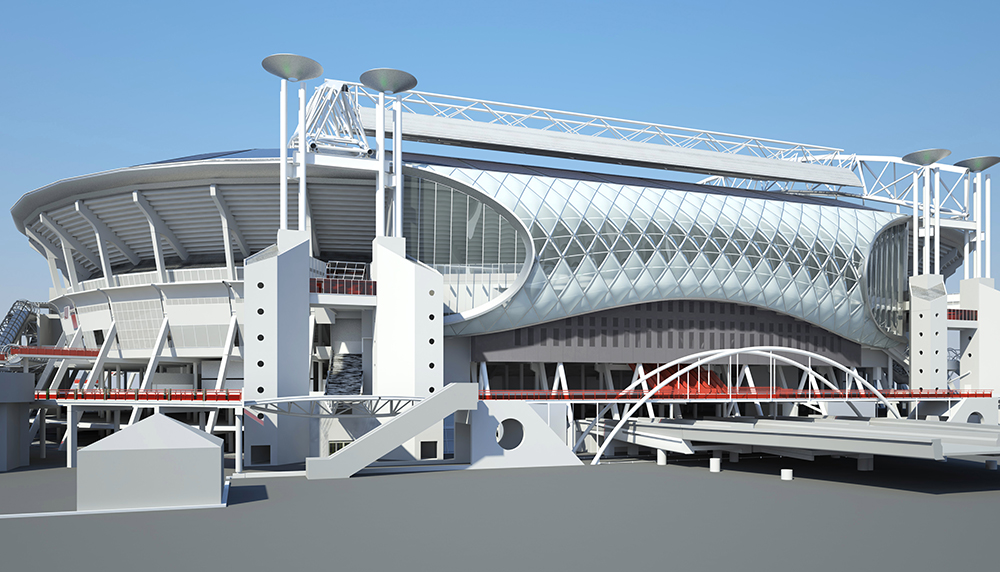 Amsterdam ArenA Director, Sander van Stiphout, advised the many industry professionals gathered at this week’s Coliseum Summit EUROPE event that Phase 1 of the redevelopment got underway 3 weeks ago.

With the stadium having been granted the rights to host a number of matches during the UEFA European Championships 2020 (EURO 2020) two years ago, it was apparent the Amsterdam ArenA needed to modernise its facilities and improve internal access.

The large-scale renovation is called Project ArenA 2020, which consists of three phases.

Phase 1, which is now underway, concerns the east side of the venue and includes the addition of a 2,500m² Texlon® ETFE facade by Vector Foiltec to enlarge the lower and upper tier concourses. With the venue’s new façade and its slim supporting steel structure, spectators will be protected from the elements, but also feel open to the surrounding city. For this element, Ballast Nedam provided the detail engineering.

The appearance of the stadium will also change: with the shape of the Amsterdam ArenA to be transformed from the current concave shape to a new convex design. With UEFA having assigned four EURO 2020 matches to the stadium, the new facade will provide all sides with a new ‘shell’ to protect the fans from the elements and ensure an enhanced fan experience.

Cooperation between Ballast Nedam and the Amsterdam ArenA

In the period 1993-1996, Ballast Nedam constructed the ArenA in cooperation with BAM. Ballast Nedam is also a Founder of the Amsterdam ArenA. A component of this is the founder agreement that was entered into with the stadium and this agreement will be extended to 2026. In that context, both parties are looking at possible partnering in various international stadium projects.

Henk Markerink, CEO of the Amsterdam ArenA, and Cenk Düzyol, CEO of Ballast Nedam, signed a contract for the execution of the first phase on the railway side of the stadium back in December 2016. Erman Ilicak, founder of Renaissance Holding and Edwin de Kuiper CBDO of Ballast Nedam were also present.

In the past 20 years, the ArenA continued to invest in quality, innovation and sustainability. The coming major renovation also fits within that vision. In this way, the ArenA remains ‘up to date’ and continues to play in the major league of football stadiums. We are looking forward to the cooperation with Founder Ballast Nedam, who was a partner from the very start, and to the start of the new construction on the east side of the stadium.

Project 2020 will be the largest renovation the Amsterdam ArenA has undergone since its opening in 1996 and is being delivered under a Public Private Partnership (PPP) with the city of Amsterdam, Ajax FC and the Dutch Football Federation.

NB: We will be bringing you an in-depth interview with Sander van Stiphout in the near future.

#SportsVenueBusiness – providing unrivalled access to all the latest news