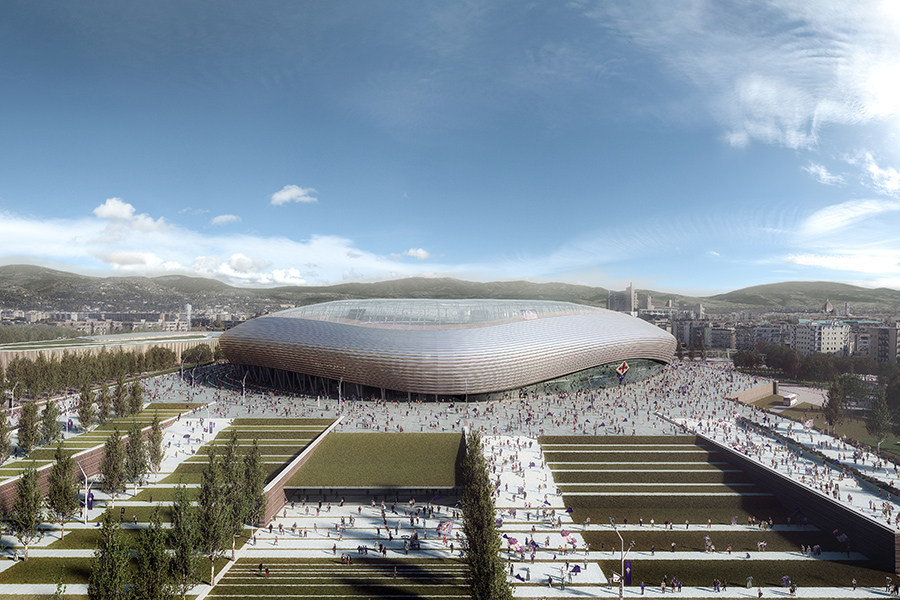 ACF Fiorentina has unveiled plans for its new football stadium to the city of Florence.

The venue will host the home matches of the club and will be part of the redevelopment of a 48 hectare area, which includes public spaces, an interchange car park and a shopping mall. The site is adjacent to the airport, four kilometres west of the Cathedral and Giotto bell tower, and well connected to the city and the surrounding areas.

The new stadium has been developed by Arup’s architecture and engineering team in Milan, with support from several other European offices, and is the most recent example of the company’s expertise in designing sports projects across the world.

We have embraced this exciting privilege and acknowledge the great responsibility in designing this stadium, to make the best possible experience for the Fiorentina fans and to make the most beautiful and well considered building that we can for the City of Florence.

The design takes inspiration from the local history and landscape to define a well-rooted building that represents an opportunity for the redevelopment of the area and will be the modern home of ACF Fiorentina.

The new venue will focus on the fans, using the latest technologies to enhance the spectators’ experience before, during and after the matches and gives special attention towards families.

We have collaborated with Fiorentina for the last two years to define a detailed brief, specifically built on their desires and expectations. We have therefore designed a stadium that reflects the local history and landscape in a modern way and provides a great and comfortable new home for the team and its fans.

Technology and modern design tools have also been an integral part of the entire design process: Arup developed bowl generation tools to provide the best sight-lines at every location. Virtual reality simulations were used to allow a real-time assessment of the fans’ experience in the stadium.

Main image (top): The new football stadium for ACF Fiorentina in Florence is part of the redevelopment of a 48 hectare area. Images, courtesy: Arup