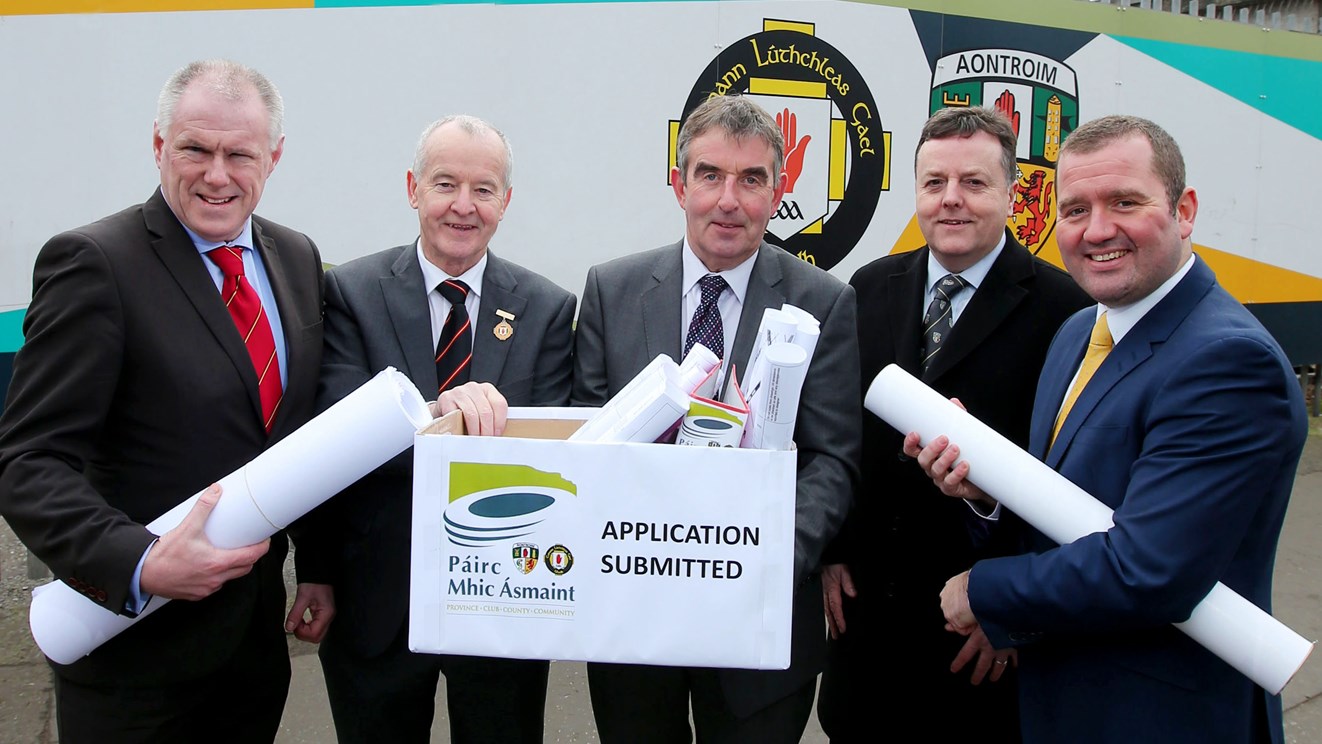 Ulster GAA has announced that, following an unprecedented 32 week consultation period, it has submitted a planning application to Belfast City Council for an iconic new provincial stadium at Casement Park.

Findings from the consultation process have revealed that 95% of people that responded to the proposed design are in favour of the project. Developed by global award winning architect’s Populous, the proposed design sets out an iconic stadium bowl, a proposed spectator capacity of 34,186 and mixed use facilities with a range of resources to advance economic, cultural and heritage opportunities for West Belfast and beyond. Ulster GAA received feedback from over 5,000 people throughout the consultation process with around 3,000 people responding to the PACC2 design phase. 92% of people believe that the project will bring socio-economic benefits with 91% also stating that the proposed stadium design would be a positive aspect to the quality of the environment.

Tom Daly, Chairman of the Casement Park Project Board, commented:

Having engaged in a thorough and extensive consultation process the Casement Park project team is delighted to be submitting its planning application to Belfast City Council for a new provincial stadium at Casement Park.  We have listened, learned and acted, developing an exciting design for an iconic stadium that will make a significant sporting, economic, social and cultural contribution to Belfast and beyond.

We are delighted with the overwhelming support the project has received with 95% of people that responded being in favour of the scheme and also with the positive endorsement we received from the Safety Technical Group.  Everyone involved in the project is now looking forward to the next phase and developing on our plans to transform Casement Park into a venue that will inspire young people for generations to come.

The submission of the planning application follows a positive report by the Safety Technical Group on the progress of the project. The report highlighted that the Gaelic Athletic Association’s (GAA) proposed Casement Park Stadium Design and Management Plans are sufficiently developed, and in accordance with safety legislation and guidance, at this stage to provide a sound basis for development towards the GAA’s target capacity of 34,186.

This is another major step in the journey to bring Ulster’s provincial stadium to the heartbeat of Antrim GAA. I have vivid memories of the pride and honour as a young boy, as a player and as a supporter of our County team and my Club playing at such a magnificent stadium in West Belfast. Along with the next generation of Saffrons, I look forward to feeling those emotions, once again, as our County and all our Clubs have the opportunity to play in and watch major football, hurling and camogie games in Antrim’s and Ulster’s iconic new provincial stadium.

With the submission of the planning application for Casement Park to Belfast City Council, Ulster GAA is now looking forward to the opportunities that the project development and the new stadium will provide.

We have seen across other major stadium’s the transformational benefits generated from a sporting, economic and cultural perspective.  With Casement Park we look forward to the creation of new jobs, training and development opportunities, community facilities and a vibrant cultural hub all supporting an enhanced socio economic environment in West Belfast and far beyond.

Commenting on the role played by the Casement Park project team and its partners, Daly concluded:

Through the outstanding professionalism, expertise and diligence of our team and our consultant partners, including RPS, Turley’s, Mott MacDonald and Populous, we have completed a comprehensive, transparent and inclusive consultation process and planning application. I would like to thank everyone involved in the process for the considerable contribution they have made.

Ulster GAA unveiled its proposed designs for the new Casement Park back in October, as was reported across the Sports Venue Business platform at the time. The new scheme, developed by global award winning architects Populous, plans to transform Casement Park with an enhanced atmosphere and iconic new stadium bowl. The mixed use facility proposes a range of resources to advance the economic, cultural and heritage opportunities for the local community.