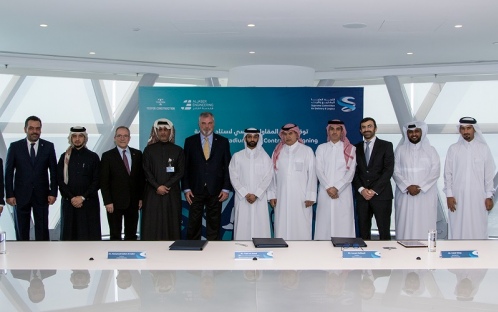 The Supreme Committee for Delivery & Legacy (SC) – the organisation responsible for delivering the stadiums and infrastructure required for the 2022 FIFA World Cup™ – has announced the Main Contractor (MC) for the stadium being built in Al Thumama, with Qatari construction giant AlJaber Engineering LLC (JEC) and leading Turkish construction firm, Tekfen Construction, confirmed as joint-venture (JV) partners.

Arab Engineering Bureau (AEB), the oldest architectural and engineering consulting firm in Qatar, was confirmed in 2015 as the Design & Construction Supervision Consultant for the 40,000-seater stadium.

Al Thumama – a proposed venue for the 2022 FIFA World Cup Qatar™ – is the seventh stadium for which the MC contract has been awarded. The venue, located just minutes from Hamad International Airport and in the centre of the urban development of Qatar’s capital Doha, is scheduled for completion by 2020 and will host FIFA World Cup™ matches up to the quarter-final stage.

We are delighted to award the main contract to AlJaber Engineering and Tekfen as a Joint-Venture. The stadium in Al Thumama is located in one of the most rapidly developing areas of Doha. Once ready, the stadium and its surrounding precinct will not only become one of the capital’s central sporting arenas, but will also serve the local community as a central community destination.

I am confident that the signing of AlJaber Engineering and Tekfen Construction, one of the leading construction companies in Turkey, will deliver an outstanding, legacy-oriented stadium for a historic tournament.

The stadium is located in an area of 515,400 square metres that already comprises four outdoor training pitches and office facilities currently used by the Qatar Football Association Technical Committee. The stadium will have a reduced capacity of 20,000 seats in its post tournament legacy mode as part of the SC’s modular stadium legacy plans.

We’re pleased to bring together two firms as reputable as AlJaber and Tekfen to deliver such an important project for the SC and Qatar. The awarding of this contract represents another important project milestone, coming at a significant time as Qatar and the SC move beyond the half-way point in its World Cup journey. The appointment of a local company in this joint venture also demonstrates our commitment to ensuring the economic legacy for Qatar, post 2022.

On being awarded the contract as the Lead Partner of the JV, Osama Hadid, CEO of AlJaber Engineering Company, said:

We are thankful the SC has entrusted us with the responsibility of constructing such an important development for the City of Doha and the communities that thrive in the district of Al Thumama. Being a Qatari company we are proud to build such a strategically important venue for this historic tournament. We will ensure delivery of a stadium that makes the residents of Al Thumama and the wider Doha community proud when it opens its doors for the tournament in 2022.

On behalf of Tekfen Construction and all of its employees, I would like to thank the SC for entrusting us with the task of delivering such an important stadium for the city of Doha and the 2022 FIFA World Cup. Turkey already has strong relations with Qatar and we are honoured to further strengthen this relationship by joining hands with our Qatari Joint-Venture partner, AlJaber Engineering Company.

We are honoured to be part of Al Thumama Stadium as design architects. This achievement for a local company shows the benefits that hosting the World Cup has created for local companies to take part in a tournament that will be viewed by millions, for the first time in the Middle East. The Arab Engineering Bureau is the first consulting office in Qatar in 1966. AEB has been awarded many local and international awards for reflecting the Qatari and Islamic identity in its modern designs.

Construction began in Al Thumama in mid-2016, with TiME Qatar the project manager. Most recently, levelling and grading works were completed by Boom Construction, with the stadium design to be launched later this year.

In common with all proposed 2022 FIFA World Cup Qatar™ stadiums, Al Thumama will use advanced cooling technologies to maintain a comfortable temperature for players, fans and officials. In it’s post-tournament guise, there are plans to reduce the arena’s capacity to 20,000 – to result in a venue better suited to local needs. While plans have yet to be finalised, community engagement representatives from the SC have already met with local residents to discuss what they would like to the stadium’s long-term legacy to be.

All contracts on the stadium in Al Thumama incorporate the SC’s Workers’ Welfare Standards. Contractual enforcement of these standards and a rigorous four-tier auditing system guarantees international best practice on the stadium.