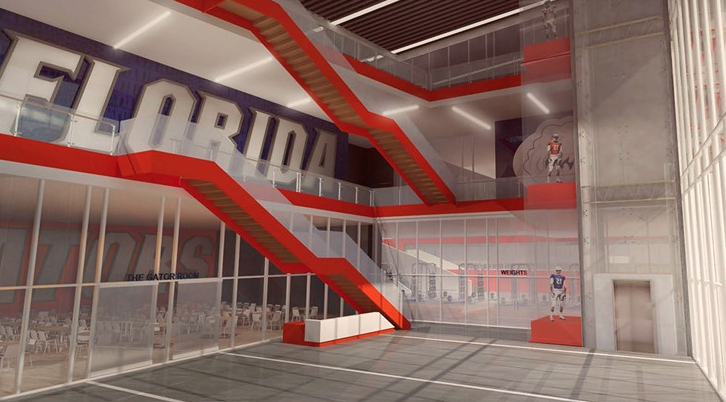 Plans for a US$60m standalone football facility for the Florida Gators at the University of Florida (UF) in Gainesville are continuing to gain ground, with the University having begun its search for a construction management firm.

In addition to plans for a US$60m standalone football facility, the Gators/UF are also seeking to make renovations to Alfred A. McKethan Stadium and Katie Seashole Pressly Stadium. The total budget for the three projects has been estimated around US$100m.

Plans are already in play for a 135,000 square-foot training centre for the UF football team, with the University currently seeking applications from design firms for the structure (preconstruction and construction phases) and will look at construction management firms in February.

The new three-storey facility will sit adjacent to the team’s existing practice facilities and has been slated to open in June of 2019.

UF had previously looked at expanding the space they have at Ben Hill Griffin Stadium, but a comprehensive study determined that:

The location of the current facilities (Ben Hill Griffin Stadium locker rooms/facilities) in relation to the practice fields is not ideal. The current space is also deficient for the expanding needs of the program.

The proposed new facility would be co-located with the practice fields solving the current issues with travel time and safety concerns with athletes crossing the road fully dressed for practice etc. Expansion of the existing space was looked at but was not really optimal for the adjacencies needed internally to the facility itself, not to mention the needed colocation to the practice fields.

The plans also list a timeline, with the AE selection process, which began January 17, 2017, with the advertisement, due to yield a shortlist by January 24. Interviews for firms chosen for the shortlist are due to be completed by February 7. At the time a firm is selected, they will be subject to an approval vote before the University begins contract negotiations, which is scheduled for February 14 to 21. The entire project has a tentative timeline of 138 weeks and has been budgeted at approximately US$59,961,700, which will be financed by the University Athletic Association (UAA).

The design concepts and projected construction dates currently in the public domain could change according to Chip Howard, UF’s Executive Associate Athletics Director for External Affairs, as reported on the school’s website:

The only thing that’s out there previously is just a study. For the scope of the project, that’s what we envision. What may change is the timeline. It was a very conservative timeline that we put onto the university procedure. That all remains to be determined based on who you hire as an architect and who you hire as a construction management firm.

The Gators released a master plan to upgrade facilities in early September. Since then, UF opened the Exactech Arena at Stephen C. O’Connell Center following a US$64.5m renovation, as SVB has previously reported.