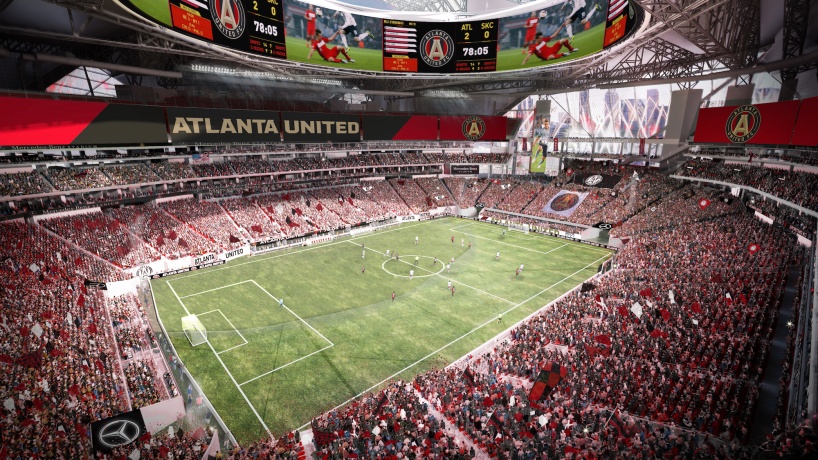 Atlanta United is scheduled for a home match on Sunday, July 30, 2017, the first-ever sporting event in the stadium, and will then play two more home matches at MBS in the middle of August as part of the inaugural month of opening events at Mercedes-Benz Stadium. These matches will showcase the stadium’s purpose-built MLS configuration and FIFA-regulation pitch. Major League Soccer (MLS) will announce its entire 2017 schedule this week, including start times and opponents.

The National Football League’s (NFL’s) Atlanta Falcons will play two pre-season games at Mercedes-Benz Stadium during August. The exact dates for the Falcons pre-season and regular season games, including the team’s regular season home opener, have not been determined and will be announced per the NFL’s normal schedule release this spring.

A grand opening celebration event is being planned towards the end of August and will be followed by two concerts. Each event will celebrate the city of Atlanta, state of Georgia and showcase the multi-purpose uses made possible by Mercedes-Benz Stadium’s design (by world-renowned architects and designers HOK’s Sports + Recreation + Entertainment practice), technology and world-class fan amenities. Event details and featured performers for those events will be announced later in 2017.

The first college football games announced for Mercedes-Benz Stadium couldn’t be more attractive. The first of two Chick-fil-A Kickoff games will feature national championship contenders Alabama and Florida State slated for Saturday, September 2. Two days later, on Monday, September 4, an SEC vs. ACC battle between Tennessee and Georgia Tech, both of which finished with 9-4 records and bowl wins in 2016, will usher in a college football season at MBS that will culminate with the College Football National Championship game on January 8, 2018.

It is thrilling to see Arthur Blank’s vision for this venue and the diverse events and incredible fan experience it will bring to Atlanta coming to fruition right from the start. The opening five weeks are going to showcase the thought, design and effort that went into this unique building in every configuration. Football fans, soccer supporters and concert-goers are going to be treated to a spectacular experience for those events. We also expect to have a number of more intimate opportunities to experience the stadium for seat license owners, founding members and stadium partners during this timeframe.

Cannon noted that construction continues to progress on schedule with significant progress being made on the unique roof and the lower bowl areas. Both are the final major structural elements to be completed. Finish work is already moving into the final stages of completion, in many other areas of the stadium, including the player locker rooms, guest suites, team offices, concessions and media areas.

I can’t say enough about the men and women from all of our construction partners and vendors for how hard they have worked and are working to complete what has been a project for the history books. There is still much to be done, and we’ll have some final shakedown work into the early fall to finish everything in the venue, but it’s exciting to have actual event dates on the calendar. We’re very excited to provide more details about each of the events as we get closer to our opening.

Upon completion, Mercedes-Benz Stadium will be a world-class sports and entertainment facility and home to the National Football League’s Atlanta Falcons and Major League Soccer’s Atlanta United.

The multi-purpose stadium will host major sports and entertainment events, including the Super Bowl in 2019, the NCAA Men’s Final Four in 2020 and the 2018 College Football Playoff Championship game.