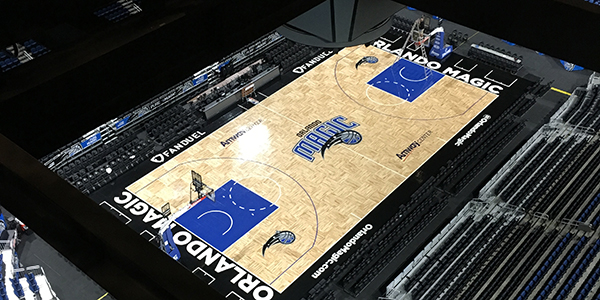 The City of Orlando recently installed a Musco LED system at Amway Center as part of Orlando Mayor Buddy Dyer’s Green Works Orlando program that aims to transform the city into one of the most sustainable cities in the nation.

The City of Orlando is leading by example by making energy efficiency improvements to our own facilities. These improvements will not only save our taxpayers money, but they will also make a significant impact to our community by creating a more sustainable environment for future generations to come.

Amway Center, the preeminent sports and entertainment venue in Orlando, opened its doors in 2010 and is home to the NBA’s Orlando Magic and the ECHL’s Solar Bears. It is the first NBA facility to earn LEED (Leadership in Energy and Environmental Design) Gold in new construction certification from the U.S. Green Building Council, using 20 percent less energy and 40 percent less water than arenas of similar size.

In keeping with its tradition of offering an unmatched fan experience, the City of Orlando wanted a lighting system that would offer a superior visual experience without compromising the venue’s energy efficiency. Those needs were met with the features offered by Musco’s LED system:

The system reduces energy consumption at Amway Center by 60 percent compared to the prior lighting equipment. And maintenance costs are eliminated with a comprehensive 10-year parts and labor warranty.

We are thrilled to provide Amway Center with a lighting system that will deliver a superior entertainment experience and get the crowd going for games. Our system will also reduce energy consumption at the venue, eliminate any maintenance headaches with our 10-year warranty and provide the latest innovations in sports lighting special effects.