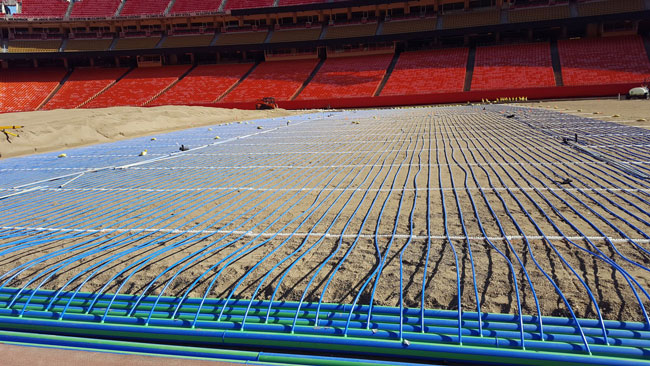 With temperatures known to plummet below freezing during the winter months in Kansas City, the Chiefs took the decision to install an US$2.2m undersoil heating system at their ‘home’ ground, Arrowhead Stadium, to ensure perfect playing conditions year-round.

Thousands of feet of pipe were installed underneath the playing surface, which snake back and forth from sideline to sideline, at a depth of nine inches below the sand that’s under the field, laid out nine inches apart and run from a boiler room.

The boiler room, which houses three three-million BTU boilers, sits underneath the bleachers at Arrowhead Stadium near the player’s entrance tunnel and was installed two years ago as the first step of the process.

The boilers heat up the water that goes through the pipes and heats the sand under the field. The system runs like the kind of thermostat you would find in your home, automatically flipping ‘on’ when the temperature gets to a certain pre-set level, which can be changed throughout the year.

Hamilton said it takes a couple of days to get the temperature of the playing surface to a certain level, particularly when it’s as cold.

While it’s not a fast process, it is effective, and is being used by most of the northern NFL teams, with the Chiefs in regular contact with the grounds crews of other NFL teams who already have the system.

The multi-million-dollar investment in this system is another example of how much trust there was that meaningful games were on the horizon for the Chiefs.

Players like quarterback Alex Smith have already said it’s the best field they’ve played on since being in Kansas City; and if the team can tell the difference, that means it’s serving its purpose.
In addition to the soil temperature, the cold weather also has an effect on how the team handle the tarp coming off the field before the game, as Hamilton explained before last weekend’s game against the Tennessee Titans – at which the coldest temperature at kick-off since 1994 was recorded:

We’re going to blow heat underneath the tarp because what happens is the moisture from the ground comes up from the bottom of the tarp, condensates and forms ice. So we’re going to keep the ice from forming on the bottom side of the tarp, but the unknown is when we pull that tarp off and it’s three or four degrees Sunday morning, it may instantly frost.

We may have what looks like a frozen field, but it will be is just the blades of grass having frost on them. The soil itself and the root zone itself will be warm.

While the spirit of installing this technology was first having an ideal playing surface late in the season, the beauty of this system – which was used as early as September – is that it isn’t just used to heat the field in historically cold conditions, as Hamilton explained:

We use it as a tool and it’s constantly keeping the soil at the perfect heat for whatever we want to do, whether it’s to grow grass, keep the soil soft or things like that. We did that because the Bermuda grass is a warm-season grass. We wanted to maintain a soil temperature of above 70 degrees for the Bermuda.

With so many applications available with this system and how it affects the playing surface throughout the year, the Chiefs’ investment already seems to be paying off!