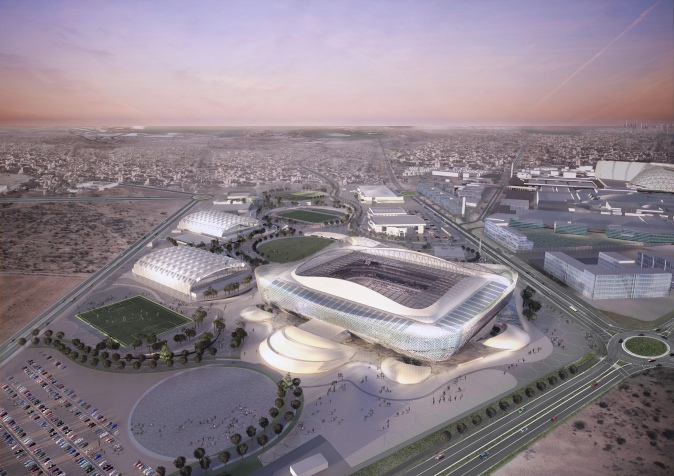 2022 FIFA World Cup Qatar™ tournament organisers, the Supreme Committee for Delivery & Legacy (SC), has announced that the event will offer the “ultimate live experience” and that, thanks to its compact nature, fans will be able to watch multiple ‘live’ games each day.

The SC has released never-before-seen stats using a new bespoke satellite mapping tool that calculates the distances and travel times between the eight currently under construction stadiums that are set for completion by 2020.
The release of the new data coincides with the six-years-until-kick-off anniversary, with the first game set to be played at Lusail Stadium on 21 November 2022. It also marks the near halfway mark since the country won the hosting rights for the 2022 World Cup project on 2 December 2010.

The new tool enabled the SC to map the total ‘Tournament Footprint’, showing how the total square mileage of the stadiums and training pitches required for the 2022 FIFA World Cup™ will be contained within a mere 235sqm, equal to less than half the size of Greater London, which covers over 670sqm. To put that in the context of other major cities in the UK, the total Tournament Footprint is a little over twice the size of Birmingham and four times the size of Manchester and Liverpool.

The SC has also been able to map the total distances between stadiums and begin calculating travel times, demonstrating the minimal distances that fans and players will have to travel between stadiums in 2022. The longest distance between any two 2022 FIFA World Cup™ venues, Al Bayt – Al Khor City in the North and Al Wakrah in the South, is a mere 35 miles, only seven miles further than the distance between Liverpool FC’s Anfield and Manchester United’s Old Trafford grounds. The shortest distance between any two venues, Khalifa International and Qatar Foundation Stadium, is a mere 3.5 miles, one mile shorter than the distance between Arsenal FC’s Emirates Stadium and Tottenham Hotspur’s White Hart Lane.

The compact nature of the 2022 FIFA World Cup Qatar™ will mean that fans can realistically watch an unprecedented two to three ‘live’ games per day during the Group Stages, depending on the final FIFA match schedule.

It also means fans will spend a similar amount of time travelling to and from games as they would do if they were making their way across any major city centre, with travel times ranging from a mere five minutes for the shortest journey to 60 minutes for the longest commute between venues. Every stadium used during the tournament will be connected by Qatar’s new state-of-the-art metro, scheduled for launch in 2019, as well as a range of other public transport options such as buses and water taxis.

We have always maintained that Qatar’s size will make it one of the most unique World Cups ever that will benefit both fans and players. For fans, this will be the ultimate tournament for live game experiences. The compact nature means short travel times from the airport and accommodation to fan parks, tourist attractions and most importantly, match venues, enabling fans to watch more than one live game a day. Qatar is also only an eight hour flight for two thirds of the world’s population. This is completely unique compared to any other FIFA World Cup.

For the teams competing, it will also be a huge advantage as they will be based at one location for the entire tournament, play in a consistent climate throughout and experience minimal travel between matches. If you compare this to the USA’s group stage travel during Brazil 2014, which saw them notch up nearly 9,000 air miles just for their first three games, you can see how this will clearly benefit the players. With one training base, one hotel and no need for exhausting flights between stadiums for the entirety of the tournament, teams will have the maximum time possible for preparation, recovery and rest.

The 2022 FIFA World Cup™ will not only be a great tournament for fans and teams travelling to Qatar but also for those tuning in, with the country’s geographical position meaning that the tournament will provide prime time viewing for more than three billion people around the world.

Qatar is investing heavily in infrastructure as part of the country’s preparations for the 2022 FIFA World Cup™ and its 2030 National Vision. New hotels will offer fans accommodation options to suit every budget and a new metro, light-rail and expanded and improved road network will mean minimal congestion on the roads throughout the tournament. Hamad International Airport is also being further expanded, increasing its hourly capacity beyond the current 8,700 to ensure the country can accommodate the thousands of players, fans and operational staff arriving in 2022.

Or go direct to the SC’s job site, at: https://jobs.sc.qa/OA_HTML/RF.jsp?function_id=14296&resp_id=23350&resp_appl_id=800&security_group_id=0&lang_code=US&oas=GXB_fw2XMyaNJFZIE0U9iQ..&params=4i6-GqDUuyCAq8qGk8z3LjqziLKxVJYVFVWXogPijaTOXw3VuikvAwkMVplBlMn2

For details on procurement and to submit an online Supplier Registration application form, go to: http://www.sc.qa/en/opportunities/procurement