HomenewsNewsIndustry NewsDetroit Pistons to move to Little Caesars Arena in 2017

Detroit Pistons to move to Little Caesars Arena in 2017 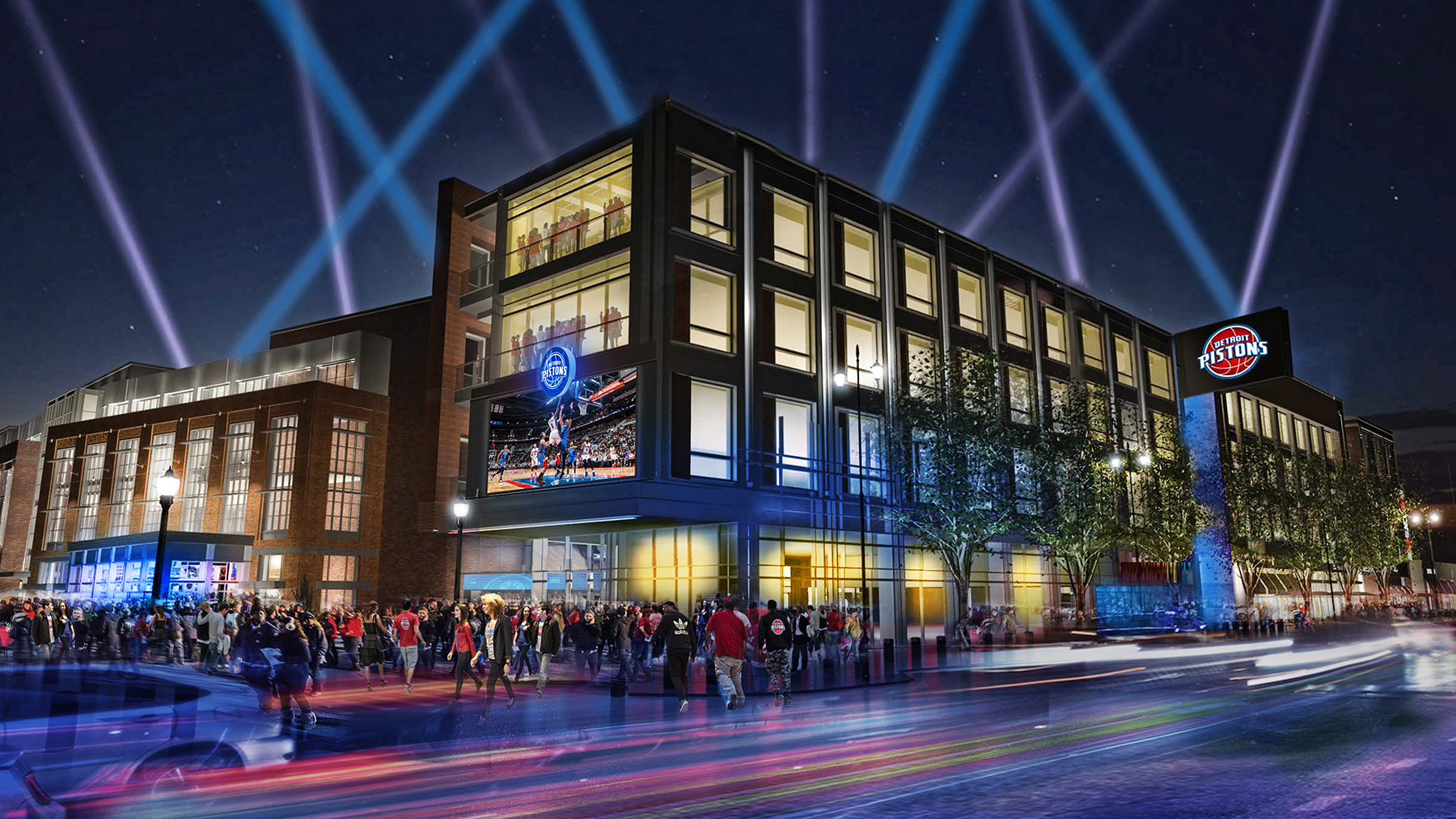 The move will include construction of a new state-of-the-art Pistons practice facility and corporate headquarters that will bring substantial new investment and economic activity to the city, and a comprehensive community benefits plan that will bring millions of dollars more into Detroit neighbourhoods.

This is a historic day for our franchise, and for the City of Detroit. We’re moving to a beautiful new arena that will provide a state-of-the-art fan experience, and we’re investing in the future of Detroit.

I’ve always believed that a sports franchise is a community asset with the power to unite and inspire people. There’s a big responsibility that goes with that, but there’s also a big payoff. Not just for the city of Detroit, but for the whole region. Detroit is rising, reinventing itself. The Pistons are doing the same. We’re in this together, and we couldn’t be more excited about that.

Ilitch described the announcement as a watershed moment for the city, region and state. He said:

Tom Gores and the Pistons will contribute tremendously toward the incredible, positive momentum underway in Detroit, making our city stronger, which benefits residents, businesses and visitors not only in the city, but also across our region and state. This is a bold move that will have a positive effect throughout our entire community.

Mayor Duggan praised the move as more evidence of the city’s continued turnaround. He said:

This is further proof of Detroit’s resurgence and we look forward to welcoming the Pistons in their new home. 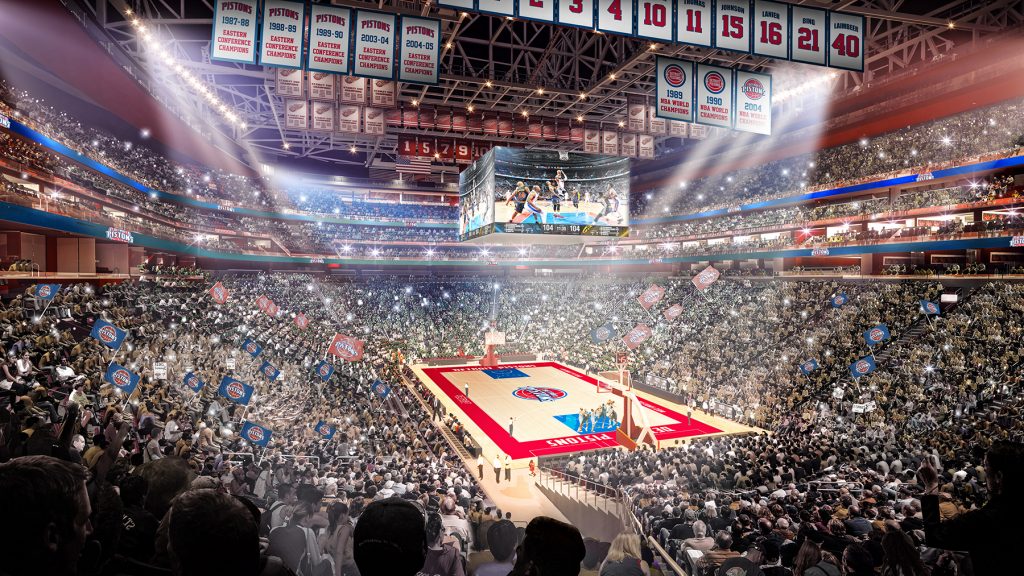 Gores described Chris Ilitch as a “driving force behind the deal”, praising not only his efforts to spearhead construction of the arena, which is scheduled to open in September 2017, but also his family’s long commitment to Detroit. He added:

I am so impressed by the vision of Chris Ilitch and his parents. We admire everything Mike and Marian Ilitch have done in Detroit and the passion they have for the city. Their dedication has served as a catalyst for so much investment and we are proud to join them in this effort.

Ilitch described how a shared commitment to community helped bring the two sides together. He said:

We have tremendous respect for Tom Gores’ passion and commitment toward building a championship team and a stronger community. We are very excited to work with Tom and his team to advance the vision of our founders, Mike and Marian Ilitch, for the live, work and play sports and entertainment district that our fans and the people of our city, region and state deserve.

With the Pistons and Red Wings playing under one roof, just blocks from the Tigers’ Comerica Park, and the Lions’ Ford Field den, Detroit will be the only North American city to have each of the four major professional sports leagues housed within four blocks in its urban core.

The Pistons are currently playing their 29th and final season at The Palace of Auburn Hills and will honour that history throughout the season in a series of special event nights highlighting the players, championships and special moments that made The Palace one of the nation’s premier venues. 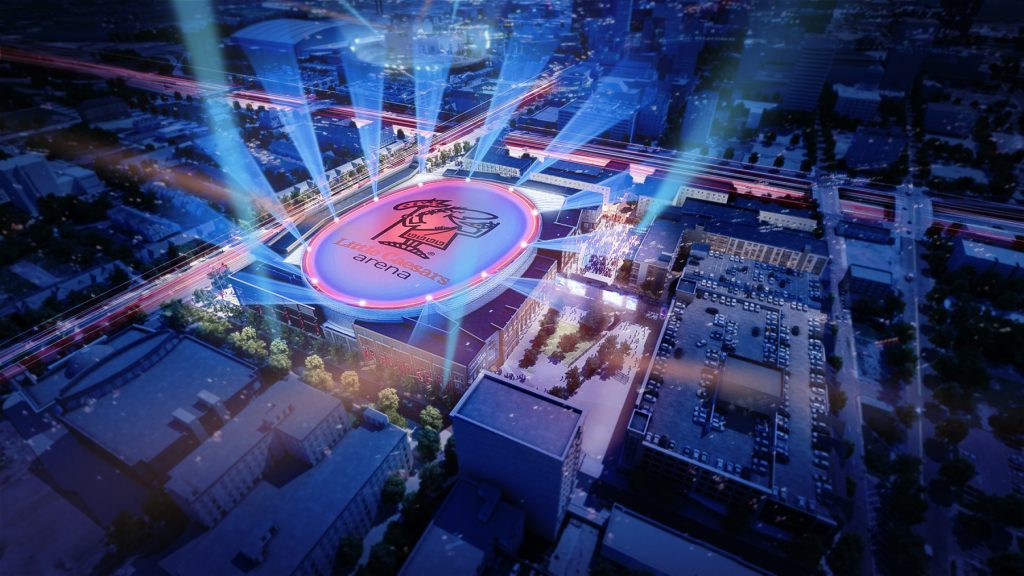 The Palace has been an incredible home filled with great memories and has served the franchise well for nearly three decades. The entire Pistons organization appreciates the dedication of everyone in Auburn Hills and Oakland County who helped make the Palace so successful.

Gores also said that Ethan Davidson, whose father William Davidson built The Palace and owned the team for 37 years, will help serve as a curator of Pistons history in the new arena, as he explained:

The Pistons have such a rich history and it’s important that our new home pays respect to that great tradition. Ethan and his family contributed so much to that legacy and I’m grateful that he’s agreed to be part of this transition as we set the stage to create more great memories in the years ahead.

The Pistons’ move is subject to approval by the NBA, and is expected to be presented to the league’s Board of Governors sometime after the first of the year. Between now and then, formal legal agreements will need to be finalised, including an arena sub-concession and various other agreements between PS&E, the Ilitch organization and the City of Detroit Downtown Development Authority (“DDA”).

In the meantime, the parties have entered into various Memoranda of Understanding (“MOUs”). Under those MOUs, Palace Sports & Entertainment (“PS&E”) has agreed to bring the Pistons to the new Little Caesars Arena. The parties’ sports franchises will remain separate and each sports franchise will continue managing its own business operations. With respect to entertainment, Ilitch Holdings, Inc. and PS&E have agreed to establish a joint venture in connection with their entertainment venues: Little Caesars Arena, Comerica Park, Fox Theatre, City Theatre, The Palace of Auburn Hills, DTE Energy Music Theatre, Meadow Brook Amphitheatre and Freedom Hill Amphitheatre. The planned JV will help ensure that Southeastern Michigan continues to attract the most exciting acts in the world, while simultaneously supporting local and emerging artists.

Separately, the DDA has agreed to contribute US$34.5m to cover the cost of modifying Little Caesars Arena to accommodate NBA basketball. Any cost overruns or additional expenses, however, will not be covered by the DDA or indeed the taxpayers.

It is estimated that at least 50 percent of the DDA contribution will come from savings generated through a refinancing of the existing Tax Increment Revenue bonds issued by the State in 2014 to partially fund Little Caesars Arena. The remainder of the DDA contribution will be captured by extending the term of these bonds by an additional three years. No City of Detroit general funds will be used.

Following DDA approval of the agreement, the DDA board, Detroit City Council and Michigan Strategic Fund board will be asked to approve the amended tax increment plan to support the proposed refinancing.

From an economic standpoint, the move by the Pistons will provide substantial benefits to the local economy, which is already getting a shot in the arm from The District Detroit, a US$1.2bn sports and entertainment development.

Relocating the Pistons and building a new practice facility and corporate offices will generate an additional US$596.2m in estimated total economic impact in Metro Detroit and create more than 2,100 jobs, according to a study by the University of Michigan Center for Sport and Policy commissioned by PS&E. That includes an estimated 1,722 construction and construction-related jobs, and 442 permanent positions.

The move also could benefit Auburn Hills, Oakland County and the State of Michigan if The Palace of Auburn Hills, where the Pistons currently play, is redeveloped, according to a separate study by the U of M Center. In that event, the study projects a net increase of US$7.3m per year in new property and personal income taxes and the creation of 1,950 construction and permanent jobs.

Gores said it is premature to discuss the future of the Palace, but expects there will be a lot of attractive options:

That is a valuable piece of property and we think there is a lot of opportunity to do some exciting things up there that would be very good for Oakland County.

Community Benefits for City of Detroit

The agreement with the city also includes a 10-point community benefits plan that will create jobs and bring millions of dollars of investment into Detroit neighbourhoods, as Gores outlined:

I’ve always said that the Pistons are a community asset. My responsibility as owner is to make sure we are not only successful on the court, but off it as well. These initiatives will help us do that.

Under the plan, the Pistons organisation agrees to:

Construction of the new Little Caesars Arena – designed by HOK – is on track for a September 2017 opening and the centralised location will make Pistons games more accessible to more fans in more parts of Southeast Michigan.

Exciting features of the new facility include:

The District Detroit is one of the largest sports and entertainment developments in the country. Located in the heart of Detroit, this 50-block, mixed-use development led by the Ilitch organization unites six world-class theatres, five neighbourhoods and three professional sports venues in one vibrant, walkable destination for people who want to live, work and play in an exciting urban environment.

Home to the Detroit Tigers, Detroit Red Wings, Detroit Pistons and Detroit Lions – The District Detroit represents the greatest density of professional sports teams in one downtown core in the country.