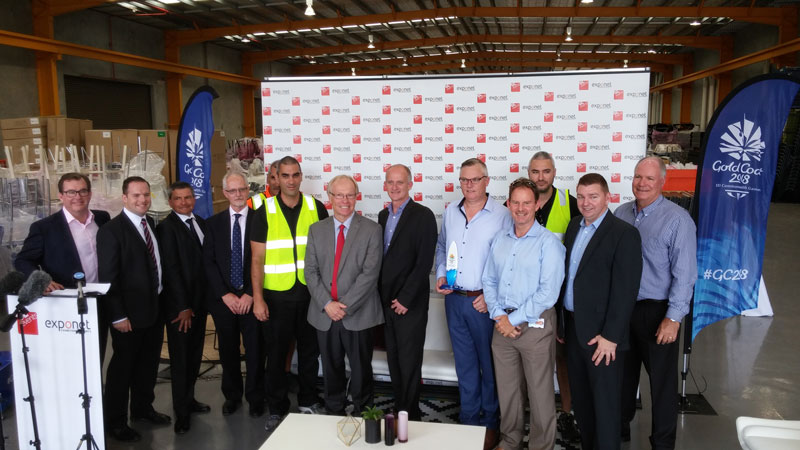 GL events ExpoNet will deliver more than 60,000 temporary seats for use across 13 Games venues, complementing existing infrastructure and ensuring adequate seating for spectators to enjoy the sporting spectacular.

With more than 1.5 million spectators expected at the Games, temporary seating will be critical to the successful staging of GC2018.

GOLDOC Chief Executive, Mark Peters, said this partnership is another example of how GC2018 is delivering on the promise of diverse and enduring economic growth bringing major economic benefits to the local area. He said:

This is a great opportunity for a local supplier to be a part of a high profile contract, but also to work with and learn from a world leader in temporary event structure.

Temporary seating is a key part of many major sporting events. It will provide greater capacity to venues, improve comfort and not leave an unnecessary oversupply of underused seats post-Games.

GL events ExpoNet are two companies who have merged together to successfully deliver large scale events such as the G20 in Brisbane. ExpoNet is an Australian company based between the Gold Coast and Brisbane and is one of the largest, local suppliers in the Australian event industry. GL events is a worldwide leader of integrated solutions and management services, delivering high profile international major events such as the Sydney Olympics.

One of the most iconic symbols of the Gold Coast 2018 Commonwealth Games (GC2018), the Queen’s Baton, was this revealed to a packed theatre at Jupiters Gold Coast as the city marks 500 days to go until the Games.

The distinctive loop design made a spectacular appearance on the stage, illustrated by a four-metre tall hologram. A hologram of the world map was also used to show where the Queen’s Baton will journey to as visits every Commonwealth nation and territory before landing in Australia. The fun-filled show featured the Baton’s designers and was capped off by an outstanding dance performance that wowed the crowd.

The Queen’s Baton will be the centerpiece of the Queen’s Baton Relay (QBR), a Games tradition that celebrates the Commonwealth’s diversity, inspires community pride and excites people about the world-class festival of sports and culture to come.

The Queen’s Baton carries a personal message to the athletes of the Commonwealth from Her Majesty Queen Elizabeth II, on a journey from Buckingham Palace to the Opening Ceremony of the Games, where the message is removed from the Baton and read aloud by Her Majesty of a representative.

Made using macadamia wood and reclaimed plastic sourced from Gold Coast waterways, the Baton’s design has been inspired by the region’s vibrant spirit, indigenous heritage and with sustainability in mind.

The 288-day international sector starts next year at Buckingham Palace on 13 March during Commonwealth Day celebrations, when the Queen places her message within the Baton.

The Baton’s first port of call from London is Sierra Leone. During its global journey, thousands of batonbearers will carry the Queen’s Baton over 230,000km as it makes its way through the six Commonwealth regions of Africa, the Americas, the Caribbean, Europe, Asia and Oceania.