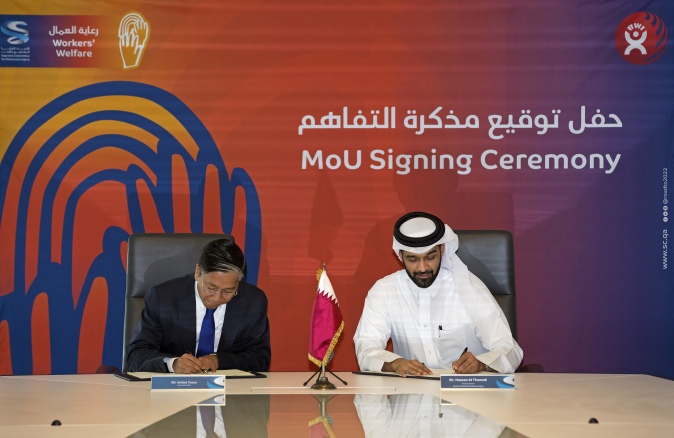 The Supreme Committee for Delivery & Legacy (SC) signed a Memorandum of Understanding (MoU) this week with Building and Wood Workers’ International (BWI), the global trade union for construction workers, that will see them conduct joint labour and accommodation inspections on 2022 FIFA World Cup™ stadiums in Qatar from January 2017.

The result of discussions that began between both parties back in March 2014, the MoU, which was officially signed on Tuesday of this week in Qatar at the SC’s Doha headquarters by SC Secretary General, H.E. Hassan Al Thawadi, and BWI’s General Secretary, Ambet Yuson, will cover construction site and accommodation inspections, training and a review of the SC’s current grievance mechanisms. The agreement will initially last for one year.

The joint inspections will cover all stadium workers but will initially focus on projects that are being built by multinational companies that are headquartered in countries where BWI currently has representation. To date the companies that fall under the agreement are from Austria, Belgium, Italy, India, and Cyprus – companies all employed on SC projects.

As well as the joint labour and accommodation inspections that will take place regularly throughout the duration of the agreement, the SC and BWI will form a Joint Working Group (JWG) that will manage the inspections and reporting obligations. The JWG will meet to review the work that has been done to date and produce a report that will be released to the public after every JWG meeting.

Drawing upon expertise from its 340 affiliates within 130 countries, BWI will also conduct health and safety training for the SC and its contractors working on World Cup projects that fall under the agreement. BWI will also review and assess the SC’s current Workers’ Welfare Forums – a mechanism developed to allow workers to express and resolve their grievances and other issues that are mandated by the SC as part of the Workers’ Welfare Standards (WW Standards).

This is an important step to build on the mechanisms currently in place which ensure workers’ safety on projects directly related to the 2022 FIFA World Cup. As a global union, BWI will now work with the SC to review and assess the SC’s health and safety training system. We will get access to worksites and conduct labour inspections which are important preventive mechanisms against work-place accidents.

Signing this partnership with BWI is a major step for the Supreme Committee which demonstrates our commitment to the health and safety of our workers. It demonstrates our willingness to work with key stakeholders who share our common goal and is recognition of the relationship we have developed with BWI. We have always said we will work with anyone who can help us on this journey. This is testament to that promise.

This MoU comes at a crucial stage of our World Cup journey. As the number of workers engaged on our project reaches its peak of over 30,000 in the next 12 months, our inspection and auditing processes will need to be bolstered to ensure we continue to deliver sustainable and meaningful progress for our workers. While we have made a number of improvements in the last two years, from health and safety to accommodation standards, we recognise there is still work to be done. That’s why we welcome this MoU and look forward to continuing the relationship we began building with the BWI over two years ago.

The SC currently has eight construction sites underway across Qatar and just under 10,000 workers on-site at any given time. The number of workers engaged on FIFA World Cup construction projects is expected to rise to 36,000 in the next 12 months as various projects approach completion or the main works stage, with Khalifa International Stadium expected for completion in the coming months and the Al Wakrah and Qatar Foundation stadiums both rapidly heading towards their completion dates in 2018 and 2019 respectively.

The BWI Sports Campaign Group has been engaging with FIFA and other global sports bodies since 2006. What we signed today makes it clear that the health and safety of construction workers is a top priority for the Supreme Committee for Delivery and Legacy as they prepare to host the world’s biggest sporting event, the FIFA World Cup. This is a positive step and we hope many others will follow their lead for future mega-events.

The agreement with the SC regarding the 2022 FIFA World Cup Qatar™ follows a MoU that was signed with FIFA, the 2018 FIFA World Cup Russia™ Local Organising Committee (LOC) and the Russian Building Union in August this year. Since then, BWI has been part of monitoring visits organised by FIFA and the LOC at the  stadium construction sites in Russia.

The MoU signing follows a number of other significant steps the SC has taken in the last 12 months to improve the welfare of the thousands of workers employed on 2022 FIFA World Cup Qatar™ projects, including the introduction of Edition 2 of its WW Standards and the appointment of Impactt Ltd, an award-winning consultancy specialising in human rights, labour standards and international development.
The WW Standards are a set of enforceable principles and regulations that the SC incorporates into all contracts for the 2022 FIFA World Cup Qatar™ which require contractors and sub-contractors to adhere to strict accommodation and worksite conditions. Edition 2 of the WW Standards, launched in early 2016, was devised in consultation with leading NGOs and has a particular focus on ethical recruitment, workers’ nutrition, workers’ accommodation and on-site health and safety.

Following the signing of the one-year MoU between the SC and BWI, FIFA Secretary General, Fatima Samoura, said:

Safeguarding human and labour rights is of key importance to FIFA. We are very pleased that the Supreme Committee has taken this important step in joining forces with BWI. This marks another milestone towards ensuring decent and safe working conditions at FIFA World Cup stadium construction sites in Qatar.