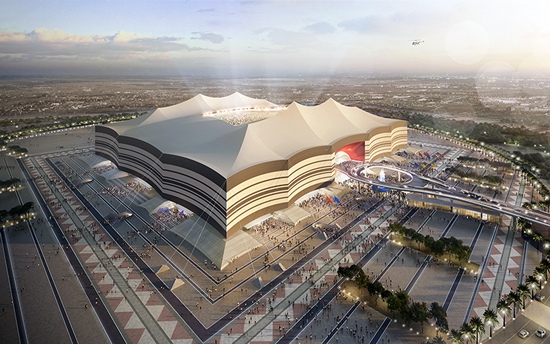 Fans walking up to Al Bayt Stadium – Al Khor City in 2022 will pass through a landscaped area similar to that at Aspire Park, and arrive at a stadium inspired by the traditional Arabian tent, which will reach up 37m in height. Three tiers of seating will provide ample space for 60,000 spectators with the seats coloured in the black, red and white interior design of a tent, and a retractable roof in place above to provide optimal cooling conditions, which will allow football to be played year-round in the arena.

Progress at Al Bayt Stadium – Al Khor City is now in full swing after successful work on the foundations and installation of the first sections of the 12m lower tier walls, which will carry the weight of the entire stadium structure. The proposed host venue up to the semi-finals of the 2022 FIFA World Cup Qatar™ will feature a futuristic retractable roof with mechanics similar to those used at Wimbledon’s Centre Court. The retractable roof will be able to close completely in 20 minutes.

We are now seeing the growth of the main stadium structure on site with the progress on the vertical construction.

Other ongoing works in the stadium precinct include excavation, de-watering, installation of pipe connections and the recent setting up of the nearby tree nursery.

Overall, we can see that the stadium construction is advancing well and we will continue to see further progress over the coming weeks and months.

As the stadium structure continues to rise, main structural work on one of the two player tunnels has already been completed and work is underway on the other one. A number of the stadium building columns have been put in place with the highest point reached so far being 21m, along with a section of the buttress wall which, once completed, will carry the next two levels of the structure reaching a total of 37m.

Currently there are 21 cranes on site  – including one 280-tonne mega crane, and 95% of the foundation work has been completed. The next step in the construction is placing the top slab and installing the other precast elements which will shape up the venue. With the stadium expected to be finalised in 2018, samples of the seats have already arrived on site.

A Qatari company has been appointed to design, manufacture, deliver and install the stadium seats, which will have patterns similar to those in a traditional tent which the design is based on.

The design, manufacturing and installation of the seats is set to commence next year on all three tiers. Two of them are made of conventional and precast structure and one of them is made of structural steel, which will be modular seating that will be removed after the tournament.

The stadium design is an entirely Qatari concept, reflecting the country’s history and culture through the nomadic tents used in the region. The venue has a modular design, which includes an upper tier of removable seats. After the tournament, this upper tier will be removed and the capacity of the stadium will be reduced to 32,000 seats.

The stadium will have cooling technology thanks to a number of cooling devices distributed throughout the venue that will receive cold water from the chillers in the nearby energy centre. 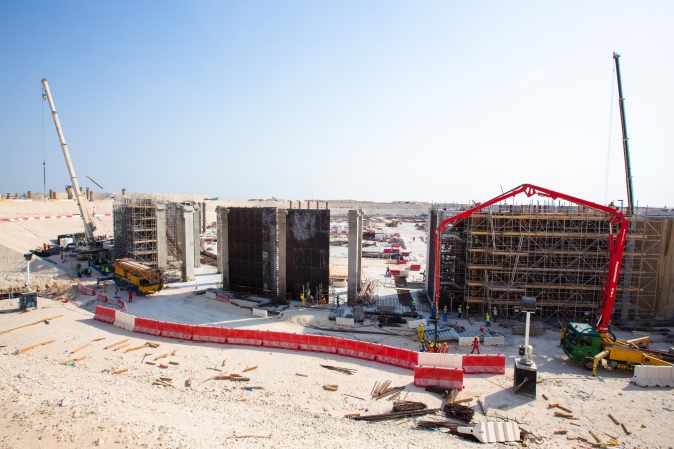 A joint venture involving Galfar Al Misnad, Salini Impregilo Group and Cimolai, is in charge of the main construction of the stadium and the energy centre. Local contractors, Bin Omran Trading & Contracting and Al Sulaiteen Agricultural & Industrial Complex, are working on the precinct infrastructure and landscape, respectively.

Al Bayt Stadium is one of the eight 2022 FIFA World Cup™ stadiums currently under construction across Qatar. Safety continues to be the number one priority across all SC sites, with the SC Workers’ Welfare Standards being implemented throughout the project.

Taken from an article by Isabel Ovalle Dávalos, which appears on the SC website: http://www.sc.qa/en/news/construction-advancing-on-al-bayt-stadium-bowl-at-proposed-semi-final-venue-for-2022 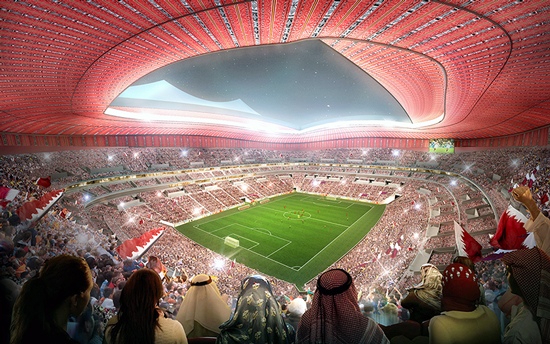 Fans arriving at this 60,000-capacity arena will have never seen anything like it. A giant tent structure will cover this whole stadium in the northern city of Al Khor. The stadium will host matches right through to the 2022 FIFA World Cup™ semi-finals.

Being delivered by the Aspire Zone Foundation, the stadium takes its name from bayt al sha’ar – tents historically used by nomadic peoples in Qatar and the Gulf region. In common with Qatar’s famously hospitable people, Al Bayt Stadium – Al Khor City will welcome guests from far and wide, entertaining them and inviting them to experience the country’s traditional culture.

The stadium design honours Qatar’s past and present, while keeping one eye on the future of the community. With the sustainability goals of the Supreme Committee for Delivery & Legacy firmly in mind, its creation will be a model of green development. Facilities for the community will spring up around it. As well as providing a first-class venue for the 2022 FIFA World Cup Qatar™, this arena will become a shining example for future stadium construction.

Just 60km north of Doha, Al Khor is a city famous for its pearl diving and fishing, whose charms tempted traditionally desert-dwelling people to the coast. Al Khor’s ability to bring cultures together made it a natural choice for hosting a 2022 FIFA World Cup™ stadium.

After the tournament, the arena will reach even more people around the globe – in a remarkable way. Like a true nomad’s tent, it will be portable. The top tier of seating will be removed following the 2022 FIFA World Cup™ and given to developing nations that need stadium seating – a lasting reminder of Qatar’s generous spirit.

Find out about all the latest procurement opportunities for those wishing to work on 2022 FIFA World Cup™ projects by reading the following feature article: http://sportsvenuebusiness.com/index.php/2016/10/05/market-insight-qatar-land-of-opportunity/