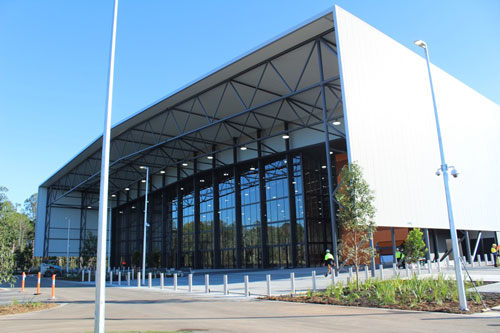 Gold Coast 2018 Commonwealth Games Corporation (GOLDOC) Chairman, Peter Beattie said the latest figures indicate that of the A$606m in construction contracts awarded for the venues and Commonwealth Games Village (CGV) projects, A$261 have been awarded to Gold Coast contractors and a further A$284m throughout South East Queensland businesses.

He also said that when a major GC2018 contract or sponsorship is awarded, benefits flow through to the suppliers, subcontractors and jobseekers in the broader economy and that is something we are extremely proud of, auguring well for a long term legacy for the city and state.

South East Queensland businesses have secured 93 of the 99 contracts awarded to date for the CGV Parklands project with 51 of these going directly to Gold Coast businesses.

Beattie said that more than 10,000 workers had played a role in the construction of venues and the CGV with approximately 1,500 employees currently employed across GC2018 related developments.

The Gold Coast 2018 Commonwealth Games will generate an economic impact of more than A$2bn and create up to 30,000 full time equivalent jobs.

The President of the International Netball Federation (INF) Molly Rhone has declared the Gold Coast 2018 Commonwealth Games (GC2018) the best prepared Games since netball was introduced at the Commonwealth Games almost 20 years ago.

On the Gold Coast for a first-hand look at the brand new A$40m Coomera Indoor Sports Centre, Rhone said the venue, which will have a seating capacity of 7,500 for GC2018, ticked all the boxes for elite level netball competition.

It’s wonderful. It’s great to be visiting somewhere with so much time to go before the event and see a facility that is this ready.

I think the Gold Coast is more ready than I have seen. I have been around since netball came into the Games in 1998 at Kuala Lumpur so I have been to all of them and I think this venue is the most ready.

We’re pleased that we have such a lovely big venue that will be able to seat 7,500 people because we know of course that netball will be able to fill the venue. Netball has a great following, so we expect the place to be full.

The Coomera Indoor Sports Centre, which opened in August this year, will host netball semi-finals and medal matches at GC2018, with preliminary matches to be held at the Gold Coast Convention and Exhibition Centre.

It will also host the artistic and rhythmic gymnastics at GC2018.

Gold Coast 2018 Commonwealth Games Corporation (GOLDOC) Head of Sport, Anita Palm, said it was pleasing to hear such positive feedback from the INF delegates, particularly given the venue is already being utilised by the Gold Coast community as a multi-sport venue before being transformed for elite competition in 2018.

When you’re planning a world-class competition there is no room for error in the seconds or the centimetres on where the court is and we have been working really hard so we’re really proud to hear Molly say that.

This venue is phenomenal, it’s been placed in an area that is well needed and it has been designed for community use. That gives challenges for us in organising an elite event, but I don’t think I have ever seen a better world multi-sport event planning their legacies for what the venue will be used for post the event.

It’s already being used for the National Junior Volleyball Championships, schools volleyball, basketball tournaments and gymnastics is already in place, so it’s well on its way to being fully utilised and we are really proud of that too.

Palm added that the venue was just one example of the lasting legacy the Gold Coast 2018 Commonwealth Games will have for the Gold Coast:

I think the Commonwealth Games in general is placing the Gold Coast on the stage, and not just the national stage, but the global stage as well.

Sports are taking notice of the Gold Coast and understanding the facilities we’re building for the community because elite sport needs community grass roots and until you have these infrastructures in place you actually can’t build those national teams.

So I think the Gold Coast as a city is building that base very strongly and sports are taking notice.

For details on the latest procurement opportunities, click here.