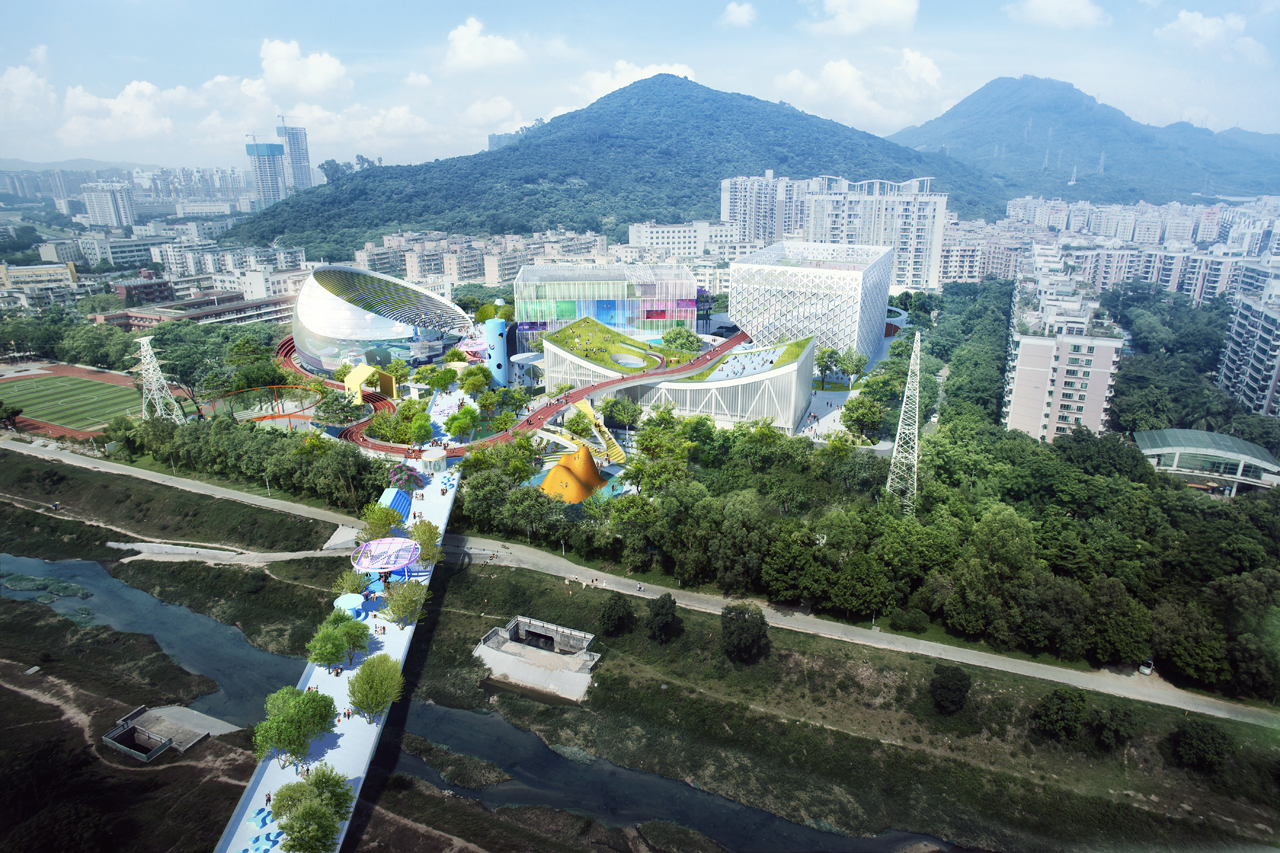 Shenzhen Nanshan Government has announced that MVRDV together with Zhubo Architecture Design have won the architectural competition for the Xili Sports and Cultural Centre; a project seeking to transform the lives of the different generations of people living nearby, through offering a more humanistic model for sports and culture.

The project will bring together a wide range of activities in this new experience centre with four distinct volumes and a total surface area of 105,000m² including a theatre, a basketball and badminton arena, a multifunctional arena and a swimming pool, set to become ‘the’ social and well-being focal point of Shenzhen’s Dasha Green corridor.

China’s first special economic zone, Shenzhen is constantly fine-tuning its urban area. Located in a residential area along the Dasha Green Corridor,  which stretches from the Nanshan mountain park to the Yangtai mountain park, the soon-to-be realised Xili Sports and Cultural Centre is an experience centre for sports, well-being, leisure and culture that seeks to achieve profound connections between nature, sports and culture, thus serving wide-ranging age groups and interests.

Shenzhen is the fastest developing urban region in China, transforming from production to a more knowledge-driven economy. These new sports centres fit into these developments focusing on a better quality of life. The City’s boom as an economic powerhouse has given rise  to high-density usage, with stadium-sized sports arenas to match. There is now a need for a more human-centred approach, the challenge was to go from bigness to compression through understanding urbanism.

MVRDV’s design for the densification and development of a sports and cultural centre responds to the growing demand for fitness sports venues, with the intention of introducing a more fun, human, social and sustainable model that departs from populist Olympic-sized sports arenas. Exercise is still the main function here, but interaction within singular spaces gives way for more open zones, where different sports and social activities can occur. The centre is an urban interface that allows for flexible use during different time frames, crossing boundaries between sports and culture, whilst strengthening the community by encouraging locals and visitors to interact in these multifunctional spaces.

There are many of these types of buildings being built in Shenzhen in a short time, which is an amazing phenomenon in itself, so the idea was to make a collection of atmospheres in this centre so that they can be distinguished from each other. We wanted to combine a large-scale sports stadium with a social aspect connecting it with the community. This was achieved by arranging different volumes on the site around a new diagonal (green) bridge linking the Chaguang metro station in the south, with the Tanglan mountains in the north, making this centre a stage for different users – nature, sports, and culture.

The 105,000m² centre consists of a 20,000m² theatre-amphitheatre, a 15,000m² Basketball-Badminton arena, a 10,000m² multifunctional arena and a 6,000m² swimming pool, presenting a dynamic public space with multiple layers. During the day, on evenings or at weekends, different groups of people with different needs can also serve as a guideline for programming of the collective spaces. A special elevated running track is the signature element of the complex as it connects, weaves in and out of all volumes. It also invites people to go for an exciting run around the complex, relax and socialise both inside and outside.

The four main buildings all have simple volumes, with a recognisable identity forming a family of different characters, and each building has an activated roof open to all users suitable for all seasons. The theatre, located inside of an open ball-like volume with space in-between the functional theatre serving as a lobby and circulation space. Its large stepped green roof can be either an amphitheatre or outdoor cinema.

The ‘multifunctional arena’ is a buzzing beehive of different sports activities. Each level has a certain theme, with the running track looping through and around the courts. Volleyball, table tennis, a general sports hall and a small soccer field on top complete this volume.

The basketball court is above the main venue where big matches will be held. From the bottom up, there is a plaza level with lobby, and the service levels containing all dressing rooms, next to the main hall. Above this, is a second basketball venue surrounded by a mezzanine for badminton, fitness spaces and a sports bar. Finally, the pool building is a compact volume lifted up one floor from the plaza level. Below the pools are service spaces, dressing rooms and the location of the wellness areas.

MVRDV’s team worked with co-architects, Zhubo Architecture Design who are renowned for their influential works in Shenzhen and throughout China, alongside adopting a humanistic approach to the effect of the design and construction process on health, well-being and fitness.

Xili Sports and Cultural Centre, which is due to get underway in 2017, marks MVRDV’s first project under construction in Shenzhen.