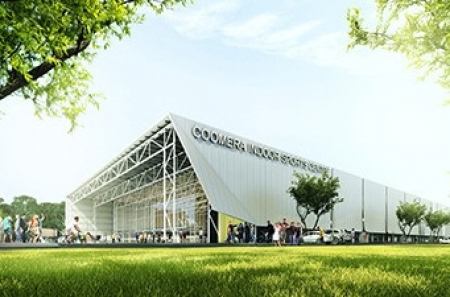 The first of three new sporting venues to be constructed for GC2018, the facility features eight mixed-use sports courts and a specialist gymnastics area.

A key milestone in the GC2018 construction program, more than 1,000 workers have been involved in the build of the state-of-the-art Coomera Indoor Sports Centre since early 2015.
The venue will host a number of community and test events pre Games, including volleyball, basketball, dance competitions and little athletics. This will provide budding sports stars of the future the opportunity to get a taste of the venue where they will witness the Commonwealth’s best Netball and Gymnastics athletes take centre stage in April 2018.
An instant asset for the Gold Coast’s growing population, the Coomera Indoor Sports Centre will be a valuable addition to the City and its sporting fraternity. And it provides a lasting legacy for community sport through to elite training and competition.

Managing Contractor: Hansen Yuncken.
Construction was completed in August 2016, more than 18 months ahead of the Games.