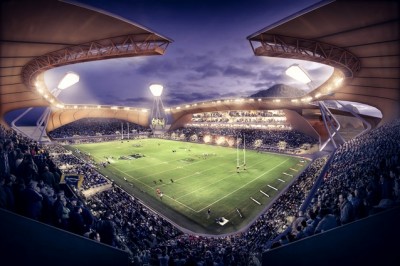 Expressions of interest are being sought for principal consultants to put forward design teams to kick-off work on the A$250m, 25,000-seat North Queensland Stadium.

The proposed Stadium is to be located in the Townsville City Waterfront Priority Development Area, on a piece of vacant land between Ross Creek and Saunders Street, adjacent to Townsville CBD.

The Queensland Government is conducting a two-stage EOI and design tender process for the proposed stadium.

Premier Annastacia Palaszczuk and Minister for State Development, Dr Anthony Lynham, said the project’s first tender marked an important milestone in the delivery of the stadium.

I want to pay tribute to the people of Townsville and north Queensland for working with my Government to push this project forward.

In addition to the $140 million my Government confirmed in the State Budget in June, together we were able to convince the Turnbull Government to match Federal Labor’s commitment of $100 million during the election campaign.

The North Queensland Stadium will create hundreds of jobs in the construction phase alone and provide a vital boost to the local economy and community.

Dr Lynham said as well as the first tender, local contractors would be able to register their interest to work on the project online. He added:

The whistle’s blown and we’re underway on the biggest job-creating project in North Queensland in decades.

From the initial EOIs we’ll select a shortlist of consortia to submit a concept design for the new stadium as part of a design tender.

That means opportunity for local consultants to team up with leading sports designers to be part of this exciting project – and a concept design for the people of North Queensland before Christmas.

Minister Assisting the Premier on the North Queensland Stadium project and stadium champion, Coralee O’Rourke, welcomed the Call for Tenders, which follows key discussion in Townsville on the Federal Government’s City Deal.

The Townsville Stadium is an absolute game changer for the entire North Queensland region and for the past 18 months, we have been working incredibly hard to make it a reality.

I know Townsville needs jobs and as part of our tender process, bidders will need to detail opportunities for local industry and business, to keep jobs local and help bring confidence back to our region.

This crucial piece of infrastructure is a priority in my Advancing North Queensland strategy to grow and diversify the northern economy, and I am pleased we are now one step closer.

This will mean important work for North Queensland’s building and construction industry, but in the longer term it’s also about diversifying our economy.

In the future, footy fans will come to a North Queensland Cowboys game and stay for a holiday and the North will be able to attract a variety of events that will attract new visitors and investment to the region.

The EOI opened August 29 at: hpw.qld.gov.au/qtenders/ and closed September 19.

Following an assessment of the EOI’s, tenders will be invited from shortlisted consortia, with the consultancy design consortia and concept design to be confirmed by the end of the year.

The project is on schedule for early construction works to commence on site in mid-2017, with the project to be completed in time for the 2020 NRL season.

The next steps include:

The business case identified a 25,000-seat, best-practice, regional stadium as the preferred stadium option to pursue.

Overall planning of the site will also make allowance for the integration of an entertainment centre at a future date.

The North Queensland Stadium is jointly being developed by:

With the support of:

The North Queensland Stadium site will be located within the Townsville City Waterfront Priority Development Area adjacent to the Townsville Central Business District (CBD), between Ross Creek and Saunders Street.

Objectives: It is anticipated the North Queensland Stadium will: