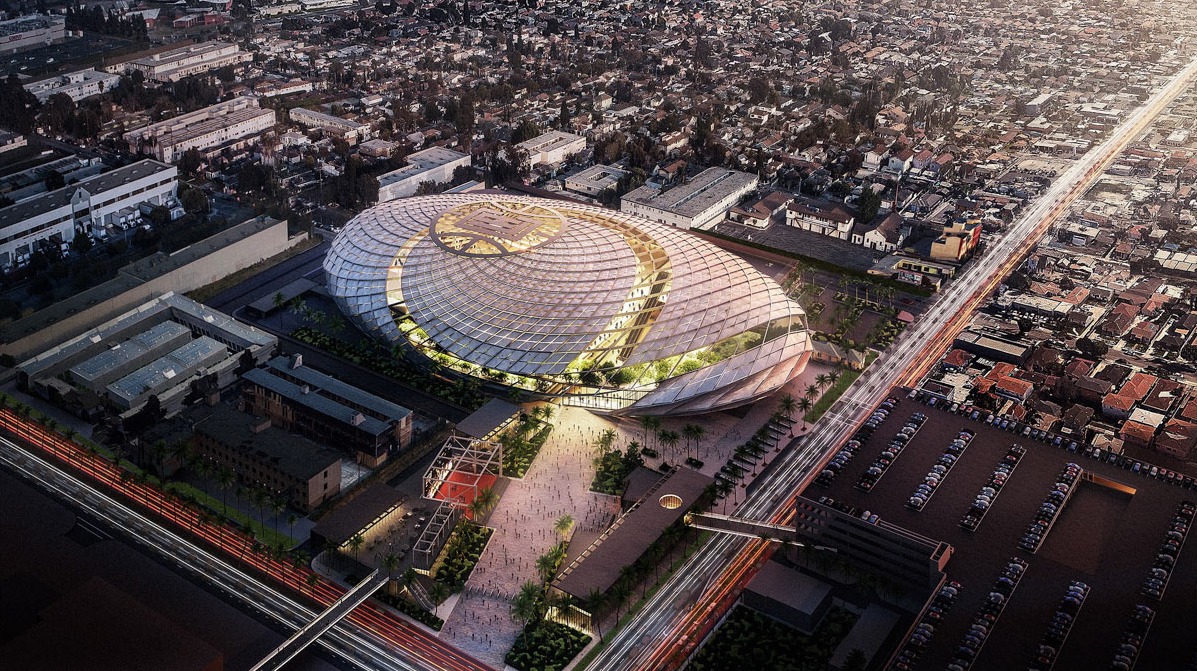 The Inglewood Basketball and Entertainment Center (IBEC) has secured final approval from the Inglewood City Council, fully entitling the world-class campus that will include an 18,000-seat basketball arena, team practice facility and corporate offices for the L.A. Clippers.

The City Council’s unanimous approval of the Disposition and Development Agreement (DDA) provides the terms for Murphy’s Bowl, the entity developing IBEC, to purchase the publicly-owned property within the arena site for a total purchase price of US$66.25m. As a result, the Clippers have opened their waitlist for season tickets and other selected arena experiences.

The total purchase price will be shared among the City, the FAA, Los Angeles World Airports and other local entities, including the Inglewood Unified School District. The DDA contains long-term commitments from Murphy’s Bowl, following acquisition of the site, to develop and operate the arena and related facilities.

Today is a new chapter for the Inglewood Basketball and Entertainment Center, as we move from the land use entitlement process and look toward construction. Every part of IBEC is being designed with purpose – with an unapologetic intensity that will define the experience together for players, musical talent and fans alike. This arena will prove, beyond a shadow of a doubt, that there is no replacement for live basketball and entertainment.

The privately-financed IBEC project will include a world-class facility that is uniquely designed to prioritise fan comfort and ease, player experience, home court advantage and community. IBEC will reimagine live entertainment, creating a new standard for live experiences all on its own.

The one-of-a-kind facility will be set within an open, indoor-outdoor atmosphere that showcases what the world loves best about Southern California. The campus in Inglewood will serve as a hub that brings the Clippers organisation together, with a new team practice facility and corporate offices. 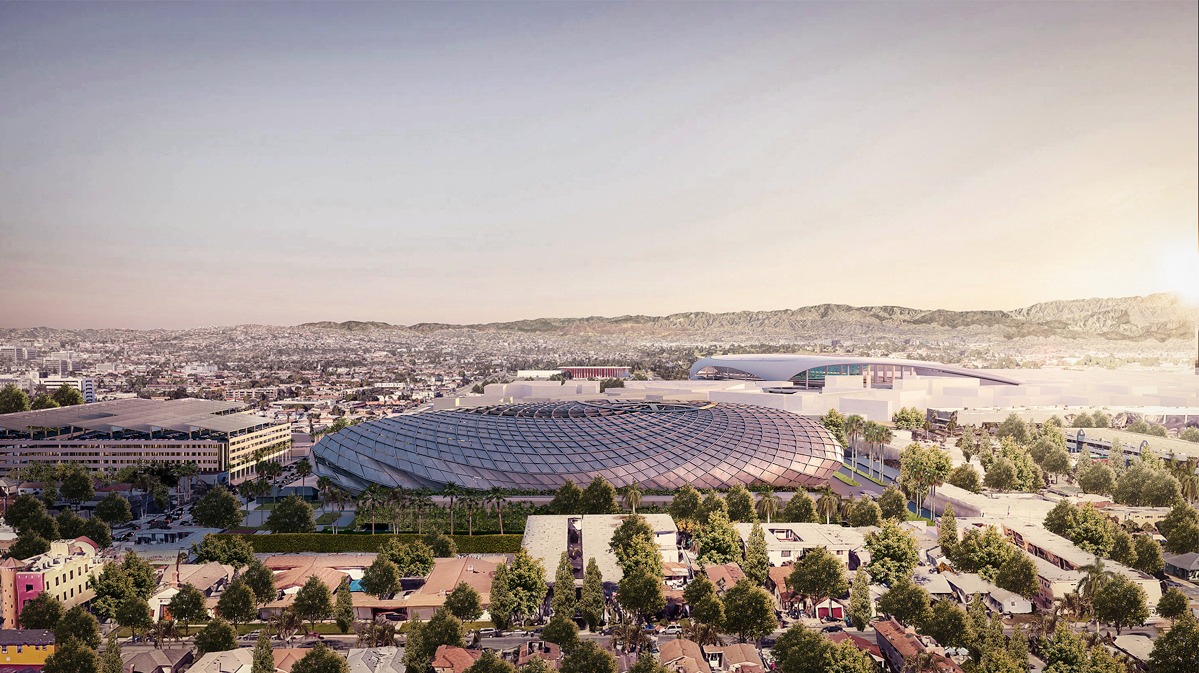 The unique building skin is formed from a series of diamond-shaped, interwoven metal panels with multiple uses that adapt over the different areas of the building

In August, the Clippers announced a global partnership with CAA Sports, a division of Creative Artists Agency (CAA), to bring to market the naming rights for the arena. CAA Sports’ industry-leading Property Sales division has completed more than US$4bn in new sponsorship business on behalf of its clients.

IBEC will generate an estimated US$260m in annual economic activity for Inglewood and approximately US$100m in tax revenue over the first 15 years of operation. That money will help support vital city services such as parks, libraries and police and fire stations.

The Clippers’ one-of-a-kind basketball arena reflects the team’s commitment to being environmentally-friendly and energy efficient, while providing the City of Inglewood with the largest community benefits package ever connected to a sports venue at US$100m.

Designed for optimal engagement of community and fans

The integrated design team, headed by AECOM, took the idea of a basketball going through a net and abstracted that into three dimensions. The elliptical form of the building captures the arc of the shot and the diamond-shaped structure reflects the geometry of a basketball net.

The unique building skin is formed from a series of diamond-shaped, interwoven metal panels with multiple uses that adapt over the different areas of the building.

In addition to being a new home for the L.A. Clippers, the arena will feature a multi-purpose plaza, complete with concert stage, community basketball courts and space for the community to gather. 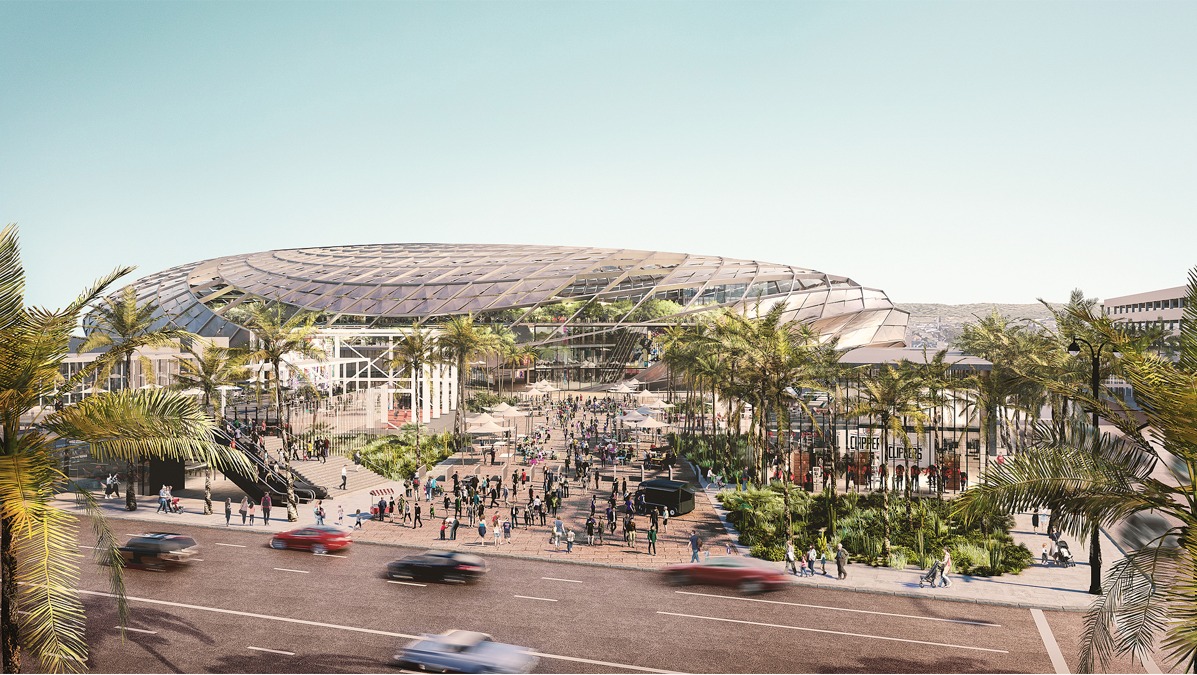 The Inglewood Basketball and Entertainment Center has secured final approval from the Inglewood City Council, fully entitling the world-class campus that will include an 18,000-seat basketball arena, team practice facility and corporate offices for the L.A. Clippers

Further information on the project can be found online at: www.clippers.com/IBEC.