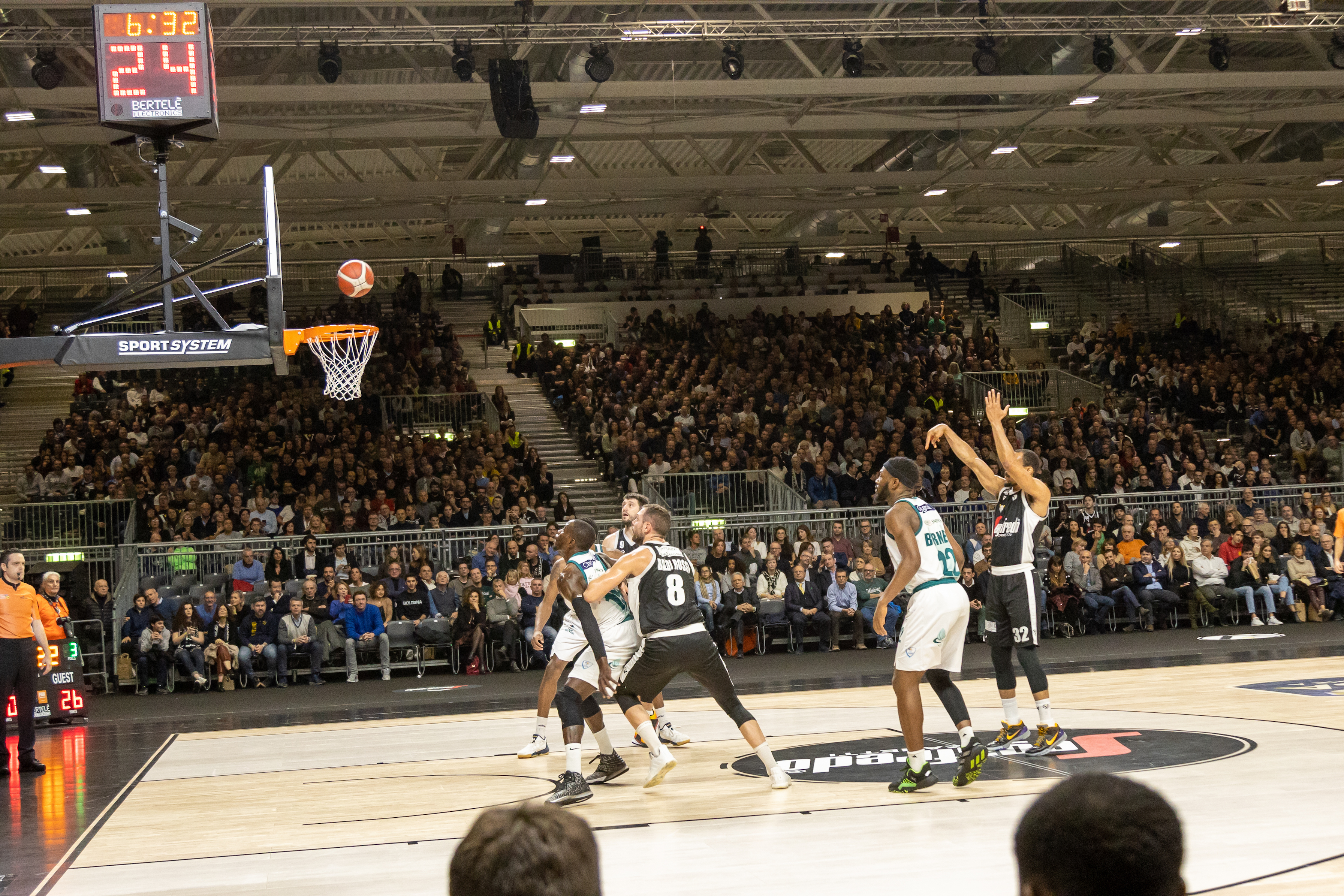 Virtus Segafredo Bologna began the new season with a win in their temporary new home. NUSSLI constructed the temporary indoor arena at Padiglione 30 in Bologna’s convention centre. Featuring nearly 9,000 seats, it was one of the biggest basketball arenas in Italy.

On November 10th, the Virtus Bologna basketball team played the opening game in their new temporary home, Virtus Segafredo Arena. The current Basketball Champions League champions defeated Treviso Basket 84:79; a great sign not only for the club’s season but for the arena project as well.

The team trod new paths with its temporary indoor arena. Fully in line with the wishes of the many basketball fans, the project – initiated by Virtus Bologna together with the Bologna Fiere trade fair – created more seating capacity first and foremost; with almost twice as many fans able to experience the club’s home games up close and personal in the Virtus Segafredo Arena.

Totalling a capacity of roughly 9,000 in the various seating and standing room categories, the indoor arena offered basketball lovers a unique sports experience. Business events could be also hosted in the hospitality zone by booking one of several attractive packages.

From the press area, members of the media were able to enjoy not only a great view of the court, but also benefit from the necessary working environment for live reporting. 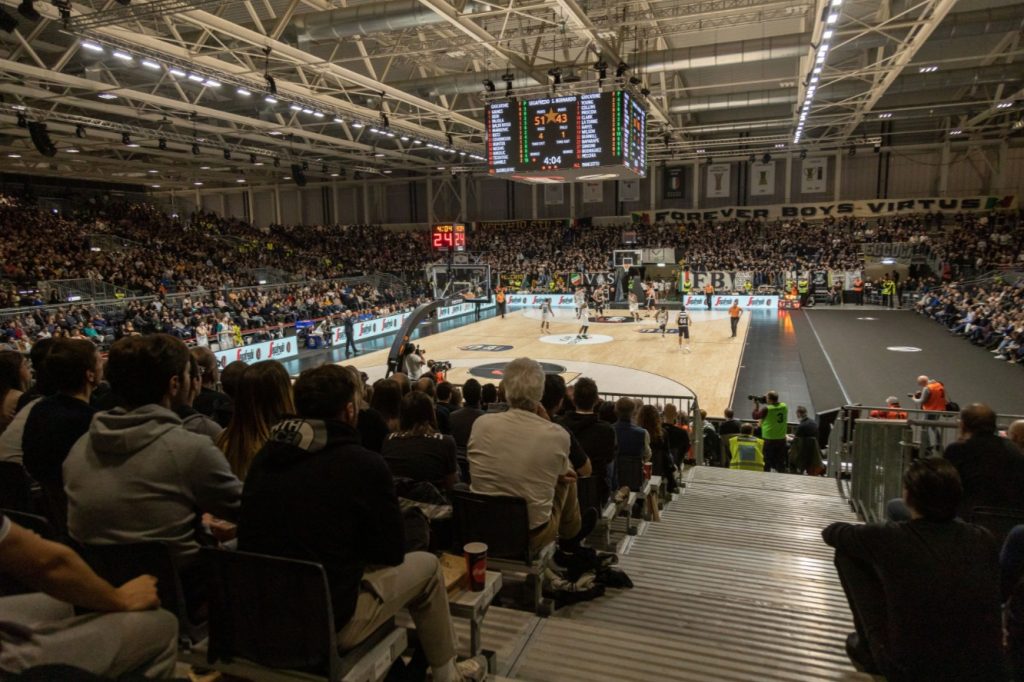 Following less than six weeks of planning and production, a total of 28 trucks delivered more than 450 tons of grandstand material to Padiglione 30 on the exhibition grounds – this included 700 steps alone, plus seats, steel tubes, floor slabs, cladding material and much more.

Within just two weeks – and thus without major disruptions to the ongoing trade fair operations – the assembly teams had erected the entire indoor arena.

During the planning phase, arranging the individual grandstands into a compact arena proved to be especially challenging. In this context, the limited width and height of the convention hall did not permit a harmonious, even shape. The NUSSLI planners thus decided in favour of an unusual arena geometry that ensured optimal fields of vision from the seats. In addition, the orifice-like access ways also complied with the high requirements placed on escape routes.

Arena in use once more for the playoffs

Virtus Bologna played in their temporary home up until January 5th, 2020, when the arena was subsequently dismantled. However, it will be rebuilt for the playoff matches.

The showcase of the temporary arena was met with great interest by the fans, sponsors, trade fair and companies alike, as has been shown in the past. The series of wins secured at Virtus Segafredo Arena also showed that Virtus Bologna felt right at home in their temporary arena.

Word on the street is that further teams and cities have subsequently shown interest in the model for their own temporary, tailor-made arenas. 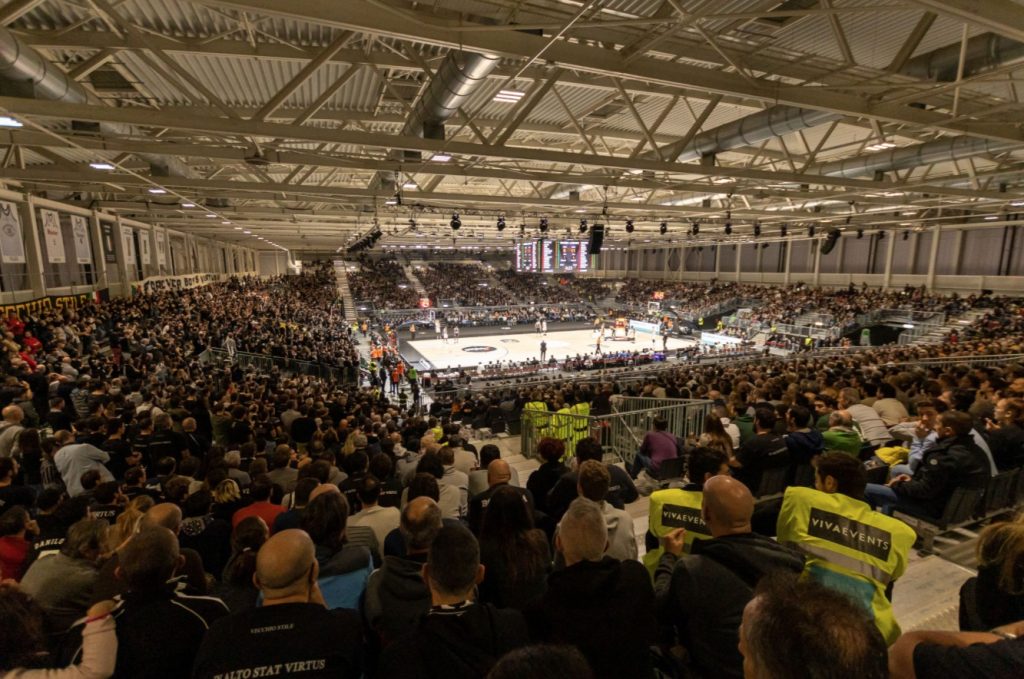 The project – initiated by Virtus Bologna together with the Bologna Fiere trade fair – created more seating capacity first and foremost; with almost twice as many fans able to experience the club’s home games up close and personal in the Virtus Segafredo Arena

The 2020 edition of ALSD International – Europe’s one & only event and community dedicated to the Premium Seat & Hospitality sector – is being held in the UK this October 12-13, and will focus on how to increase revenue through new builds, renovations and service expansions, as well as via the latest technologies and innovations in F&B. The host and tour venues for the 2020 event will be announced in the coming days, as ALSD International transforms from a once-a-year conference and exhibition to a 365 community.

#ALSD – Leading the Premium Seat sector for more than 30 years