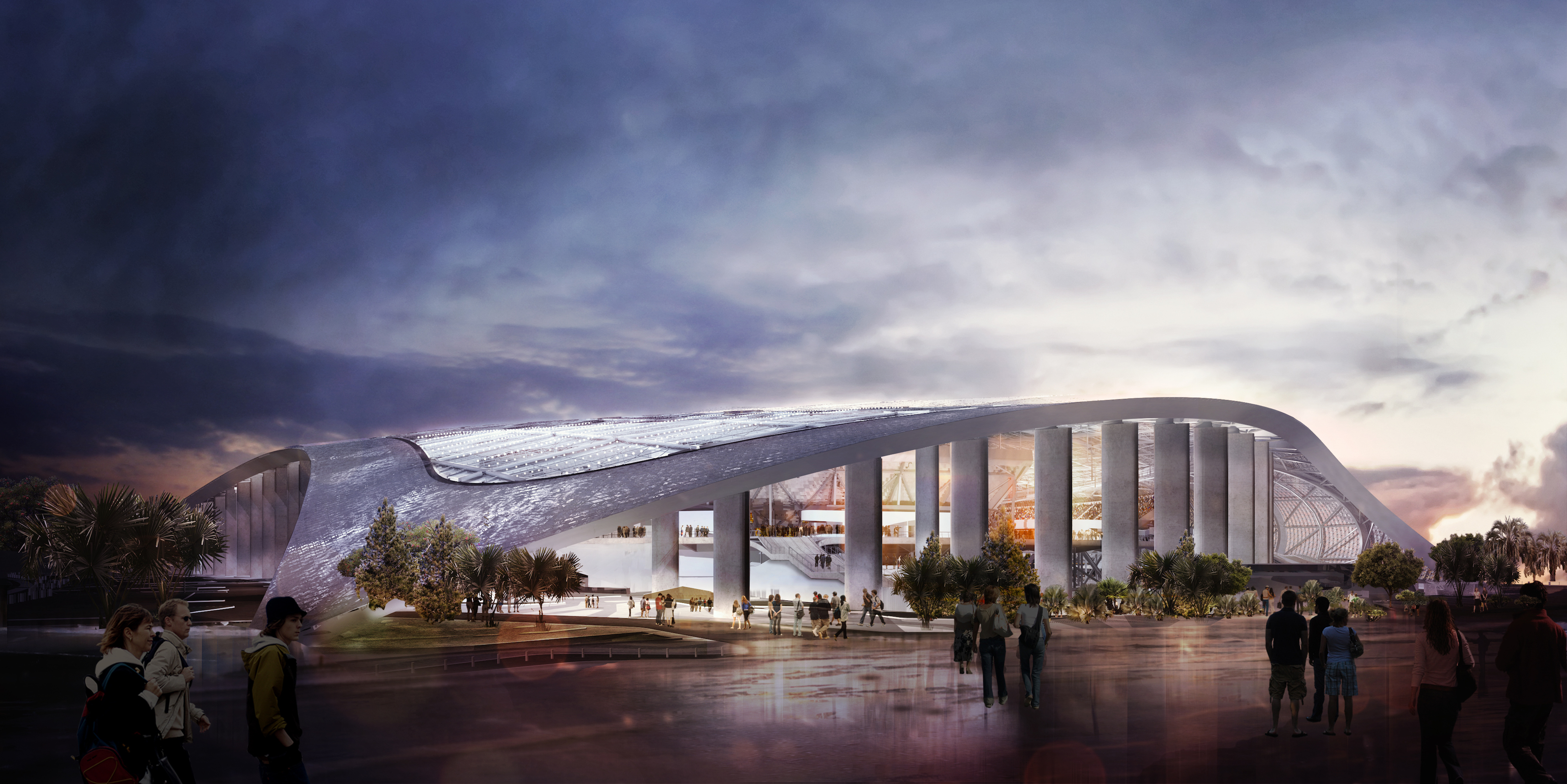 LASED is a 298-acre world-class sports and entertainment destination being built by Los Angeles Rams Owner/Chairman E. Stanley Kroenke. It will feature unparalleled event venues, office, retail and residential spaces, and more than 20 acres of parkland, with LA Stadium, the new home of the Los Angeles Chargers and Los Angeles Rams, positioned as the centrepiece of the development. 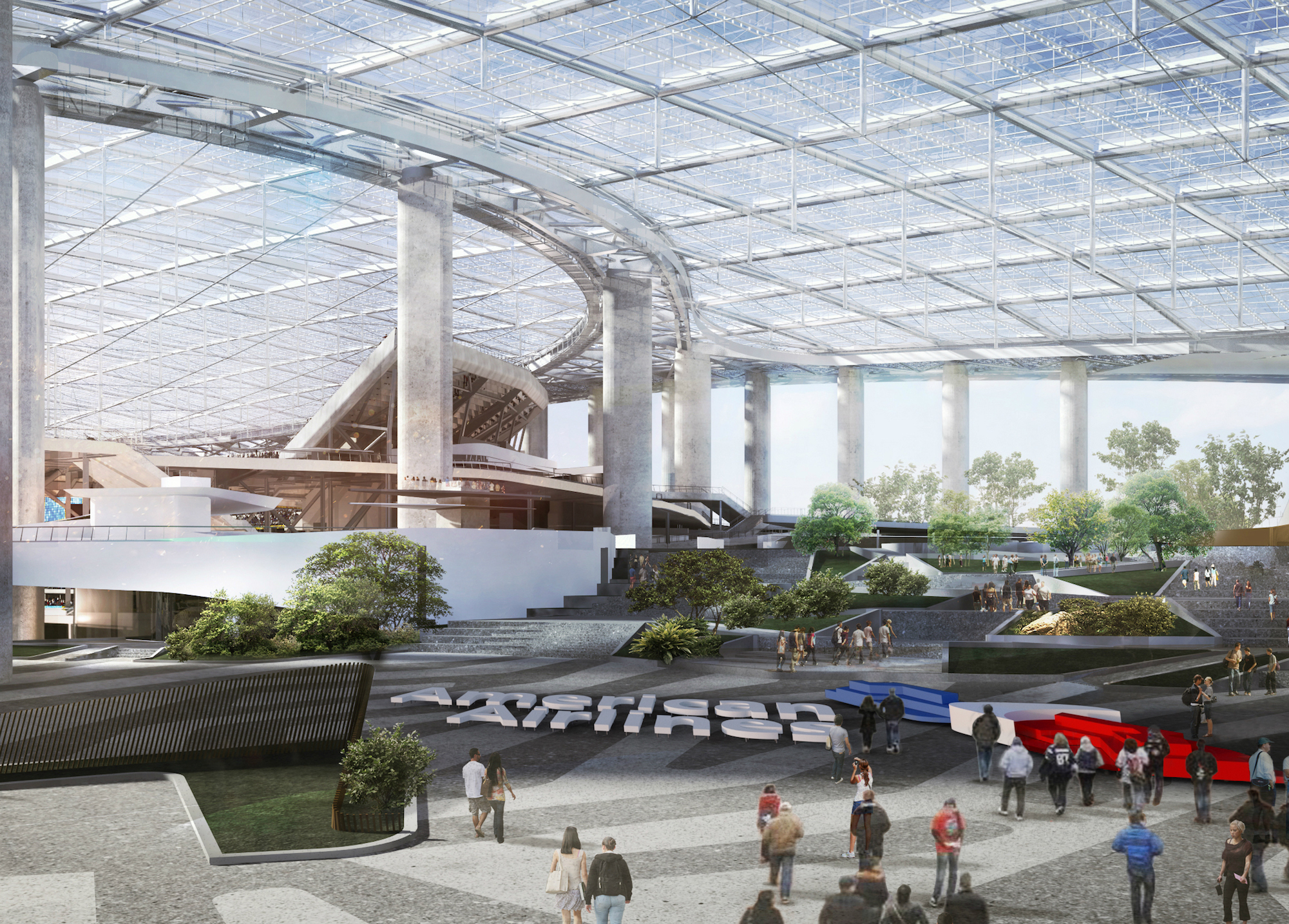 American Airlines Plaza: a 2.5-acre, two-level, open-air space, which will serve as a main entrance into the stadium and performance venue

With more than 50 million visitors to Los Angeles in 2018 alone, LASED was not only designed to entertain fans, but also to serve as a community gathering space for Angelenos and for travellers to the LA metropolitan area.

As we continue Mr. Kroenke’s vision to build the premier destination for sports and entertainment at Hollywood Park, we are proud to partner with an industry-leading business such as American Airlines. We are both making investments in Los Angeles that will provide fans and customers an elevated experience as they travel, live, work and play.

For decades, Los Angeles has been one of American’s most important markets and has played a major role in connecting Southern California to the rest of the world. It is our mission to give our customers the world-class experience they deserve, and we are committed to doing so both at the airport and within the community. It’s an exciting time for the City of Angels and for American Airlines.

American Airlines Plaza measures 10 storeys tall and has a capacity of approximately 15,000 guests. It will be open to the public year-round, on both event days, as well as non-event days. 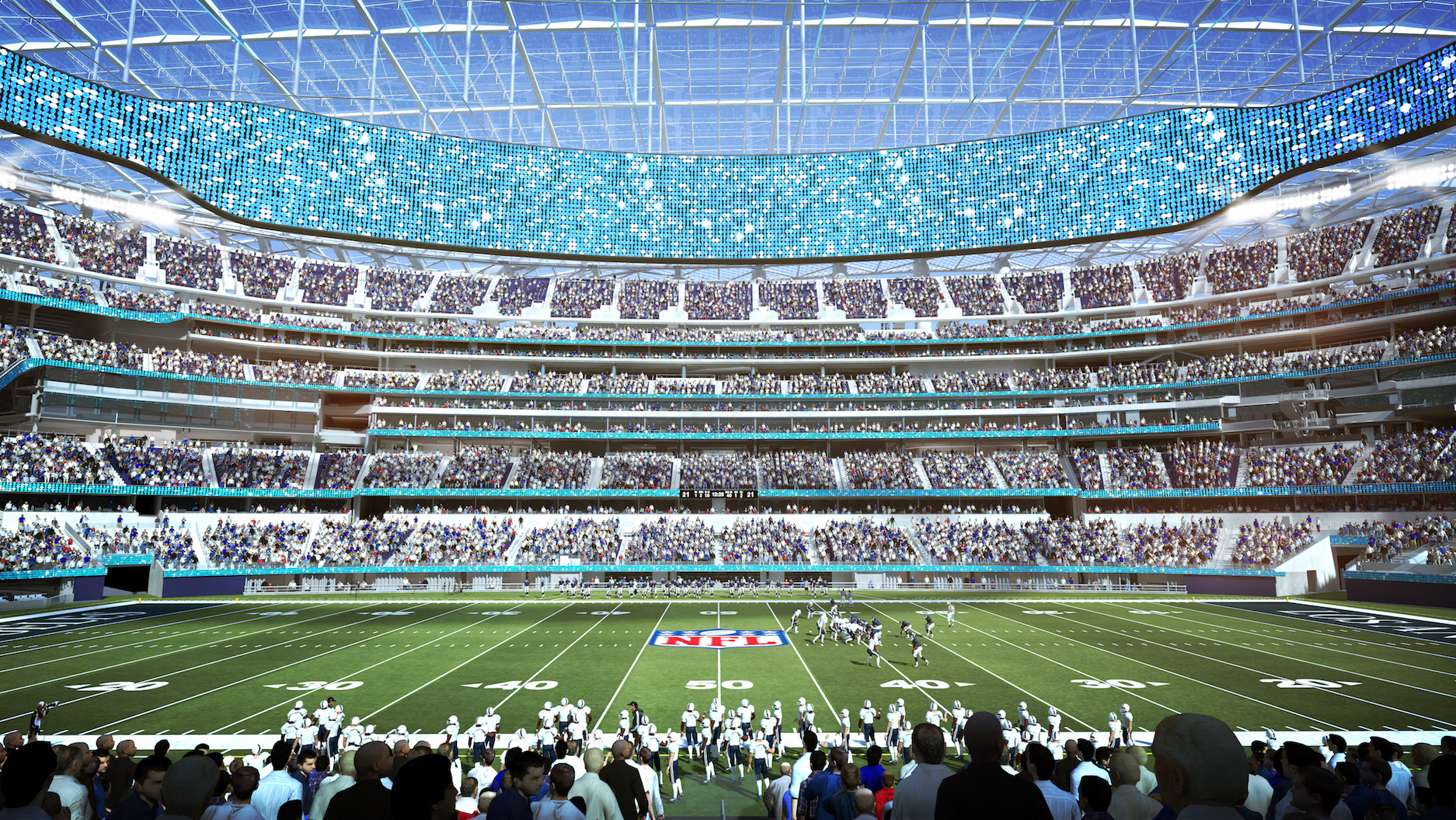 The plaza sits between the stadium and performance venue. All three venues fall under the same roof, which is made of ethylene tetrafluoroethylene (ETFE), a lightweight and transparent plastic. American Airlines Plaza will have the ability to accommodate its own bespoke programming that will reflect and connect with the cultural passions of the Los Angeles community.

American is the largest carrier at Los Angeles International Airport (LAX) with more than 200 daily flights to 70 destinations and is the only airline at LAX with nonstop service to five continents. The carrier continues to grow and strengthen its 70-plus year presence at the hub through significant direct and indirect investments in the region, including a US$1.6bn modernisation project to fully reimagine LAX Terminals 4 and 5 – American’s largest individual investment at an airport in its 93-year history. 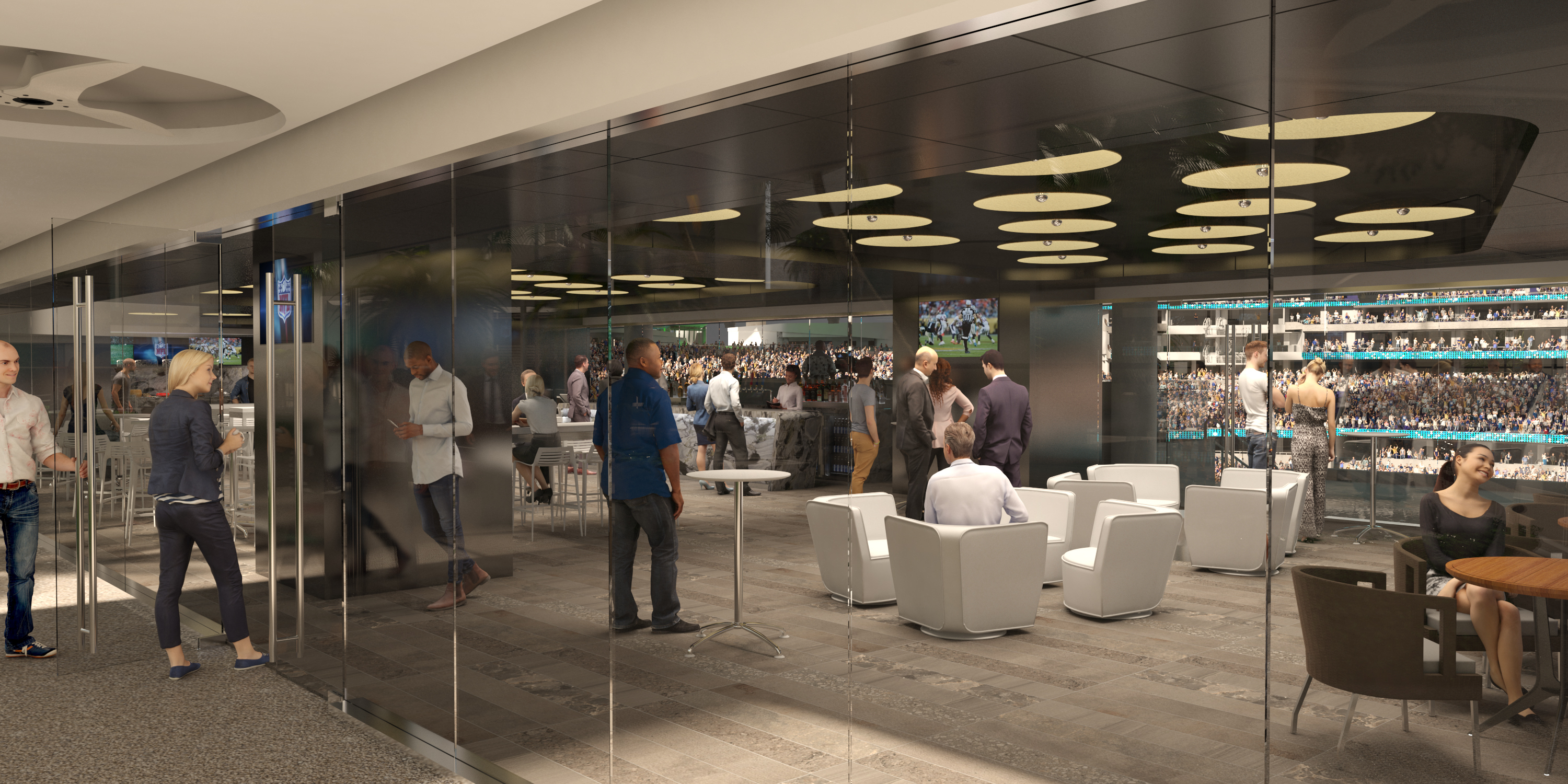 Strong partnerships with LASED, the Chargers and the Rams demonstrate American’s commitment to investing in our business and in the Los Angeles community. This stadium, and the events that will be held here, will bring people throughout the region and from around the world together. Connecting people is our business and we couldn’t be more thrilled for the bright future of this city, our airline and the 7,300 team members who call Los Angeles home.

Building the best stadium in the world brings with it the opportunity to partner with the best companies in the world. While both the Chargers and American Airlines seek to be best-in-class at what we do, what truly makes this partnership a perfect fit is our organizations’ commitment to the community. With these shared values as the foundation of this new partnership, we look forward to big things both in 2020 and for years to come.

We are thrilled to continue our partnership with American Airlines and travel with them to Hollywood Park. From building playgrounds and rewarding fans with trips to games to flying the team to Super Bowl LIII, American Airlines and the Rams have made quite a team. We are looking forward to continuing to work together to inspire Angelenos to shine bright and reach new heights.

LA Stadium and Entertainment District was represented by Legends Global Partnerships in securing this historic partnership with American Airlines. 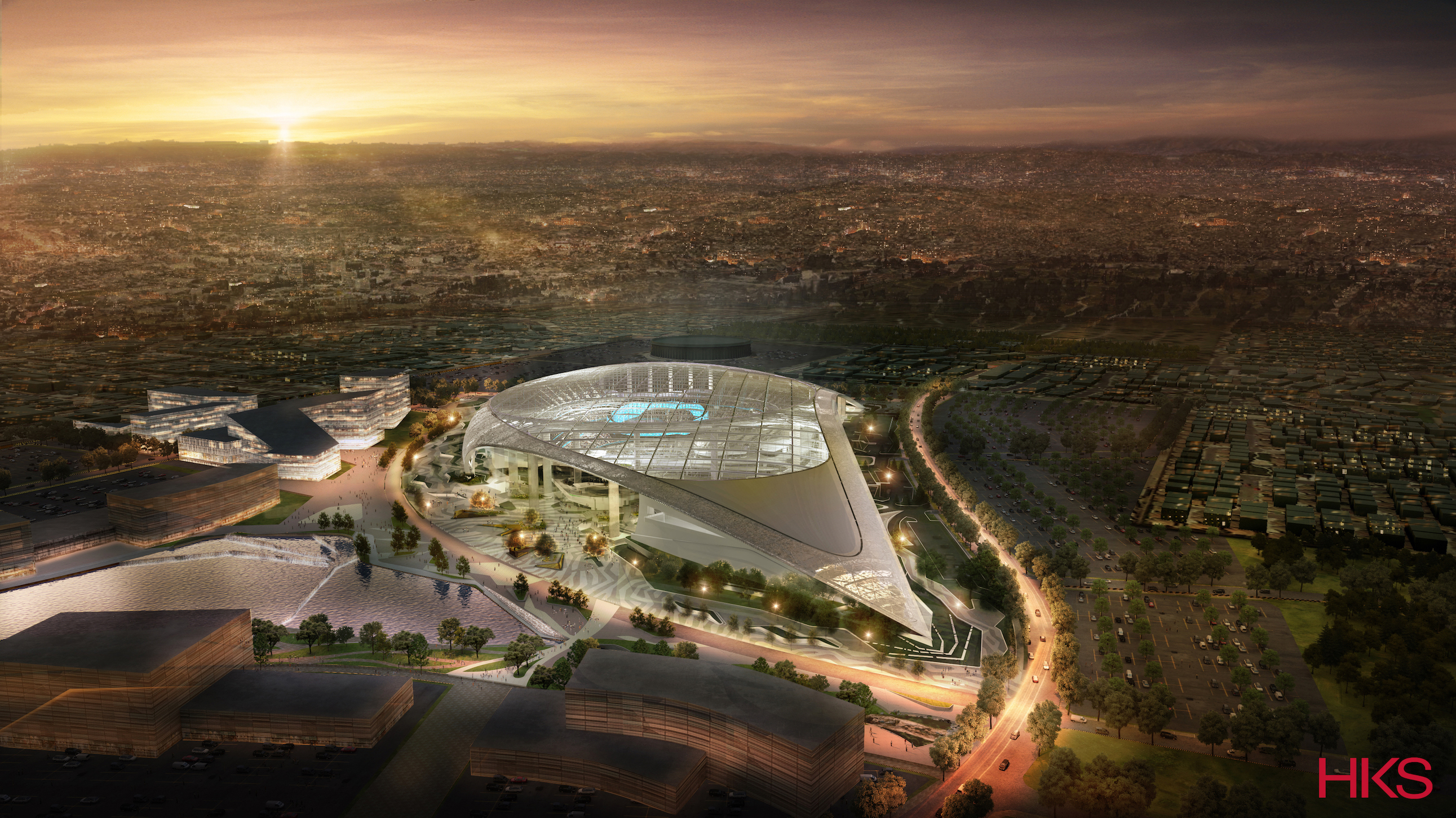 South Aerial Perspective. The centrepiece of the 298-acre sports and entertainment district, LA Stadium provides for a seating capacity of 70,240, expandable up to 100,000, with 260 luxury suites, more than 13,000 premium seats and almost three million square feet of usable space

About LA Stadium and Entertainment District at Hollywood Park

The Los Angeles Stadium and Entertainment District at Hollywood Park (LASED), being built by Los Angeles Rams Owner/Chairman and Kroenke Sports & Entertainment (KSE) owner, E. Stanley Kroenke, is transforming the site of the former Hollywood Park Racetrack to a year-round sports and entertainment destination for the enjoyment of people throughout Southern California as well as visitors to the region.

The centrepiece of the 298-acre sports and entertainment district, LA Stadium provides for a seating capacity of 70,240, expandable up to 100,000, with 260 luxury suites, more than 13,000 premium seats, and almost three million square feet of usable space. The project will include a 6,000-seat performance venue located under the same roof canopy as the stadium.

LA Stadium will be home field for the Los Angeles Rams and Los Angeles Chargers starting in 2020. It will host year-round sports and entertainment events and has already secured Super Bowl LVI in February 2022, the College Football National Championship game in 2023 and the Opening & Closing Ceremonies of the 2028 Olympic Games.

Adjacent to the stadium and performance venue, the project anticipates an initial phase of more than 1.5 million square feet of retail and office space, 1,500 residences, a hotel and more than 20 acres of parks. The long-term plans offer the possibility of developing additional phases over time. 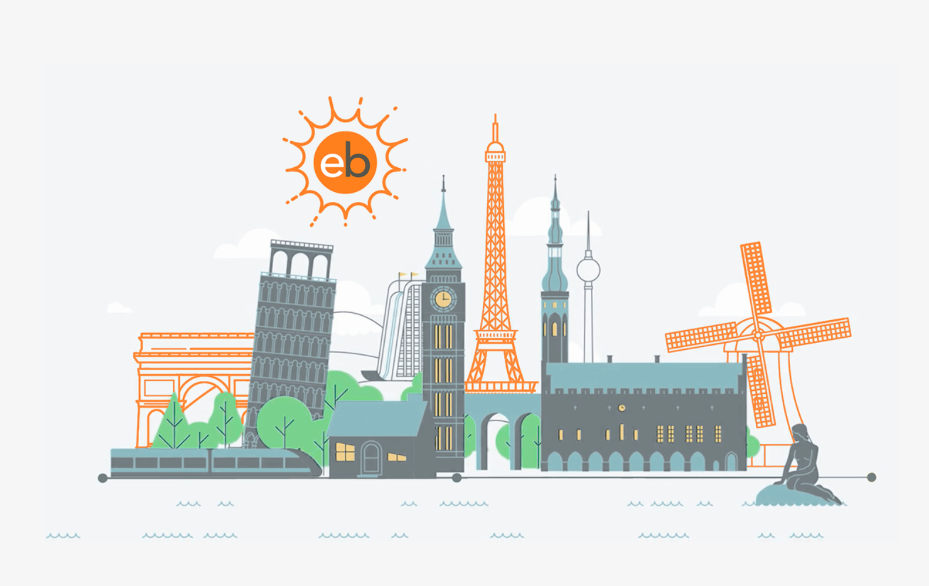 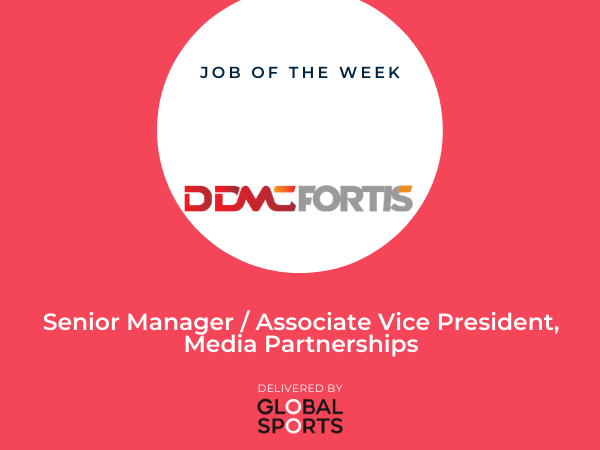