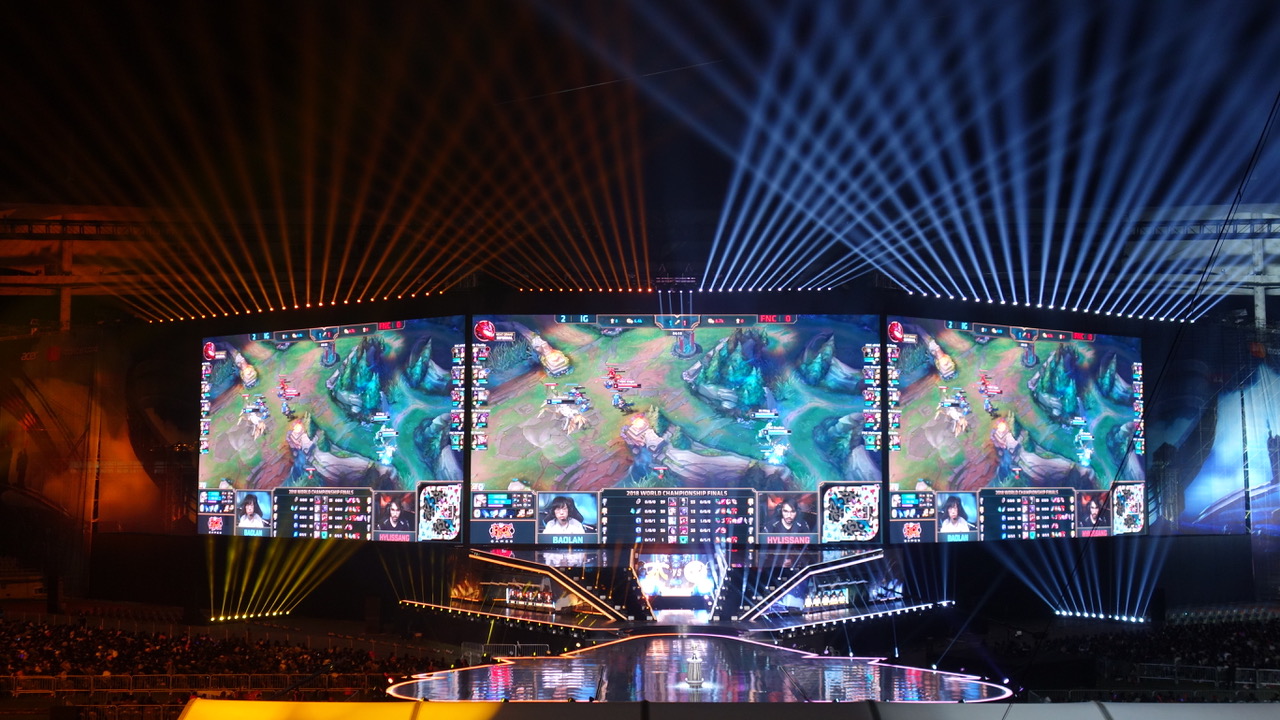 The Opening Ceremony at Incheon Munhak Stadium, Seoul used augmented reality (AR) to fit virtual/in-game band K/DA onstage, and across over 2,000sqm of screens, for the first musical performance, alongside Madison Beer, Miyeon and Soyeon of (G)I-DLE, and Jaira Burns later in the show.

Broadcast across more than 30 platforms and TV channels, in 19 languages, the extraordinary spectator numbers, boosted by China’s first participation in the final, puts the eSports showcase in the same ballpark as the Super Bowl.

Total production ‘frontage’ for the live event stage was 165m wide and 27m high, Star Events’ T-towers built on top of the Ultra structure lifting audio hangs fully clear of the screens with a hook height 32m above the ground.

It was the first time we have fitted T-towers on top of an existing structure, something the Ultra system made it very easy to do.

We put a regular VerTech stage frame in as a super-size ground support for the semi-final, at a sports centre in Gwangju, but the screen support in Seoul had to be more than four times bigger so VerTech Ultra was the perfect, flexible fit.

Working in South Korea with 35 containers of equipment and without a traditional promoter had its challenges. There was quite a lot of new kit with no time to test build it so the main build at Seoul simply had to work first time, which it did!

Our client, ConCom TV, has a regular team of suppliers, a great mix of UK, American, Chinese and Japanese, amply supported with local Korean companies, for this show. Most of us had worked together in China last year, so that made the process much easier too.

As always, it was an immense pleasure working with the Star team on yet another large scale event.

Star Events’ Gwangju kit came from the company’s base in Shanghai, while the VerTech Ultra system was sourced from the UK, bar a new raker support, which was fabricated in China.

League of Legends is a free to play online battle arena video game developed and published by Riot Games for Microsoft Windows and macOS.

Star Events is a VIP Sponsor of Sports Venue Business. For further information on their world-leading solutions and project portfolio, make sure to check out their Directory listing or visit their website by simply clicking on their logo below…