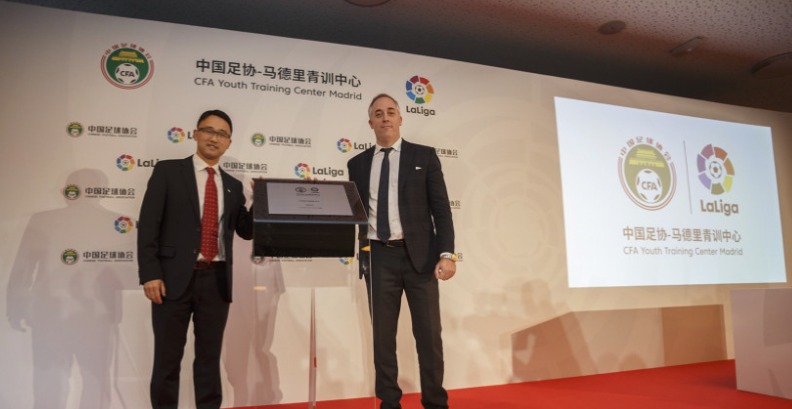 LaLiga and the Chinese Football Association have put in place plans for a permanent training base in Madrid, where players and coaches in youth football will receive sporting, academic and cultural training based on LaLiga methods.

This project is part of a strategic alliance between the Chinese Football Association (CFA) and LaLiga, which has led to a series of sporting collaborations between the two organisations in order to promote football and cultural exchanges between Spain and China.

Óscar Mayo, the Director of International Development at LaLiga, said:

We believe that football, besides the competition, has a series of values that should be shared by all. Through this project we are looking to combine training with education and cultural aspects, and therefore a much more comprehensive experience.

China’s Under-15s national team will be the first group of players to take residency at the centre, from where they will contest a parallel league with teams from the Madrid Football Federation over a 10-month programme. The China women’s Under-15s and the men’s Under-17s will also take part in one-month training programmes at the permanent training base.

LaLiga’s commitment to China is nothing new. In recent years there have been projects like the agreement with the association for international educational exchanges. Thanks to this project, more than 120 LaLiga coaches have gone to China and around 500,000 children have taken part in training programmes of varying durations.

Furthermore, the summer campuses that have been organised in the last two years in cities such as Shenyang, Qinhuangdao, Shanghai and Qingdao have allowed LaLiga to work with players of all levels and ages. This is something that has helped develop LaLiga’s methodology, and adapt it to the different needs of the players.

The new Madrid facility will be the first permanent CFA training base in Spain. Chinese men’s and women’s teams will begin residency and follow LaLiga training methods.

LaLiga shares a stage with Spanish and Chinese presidents

In other LaLiga news, the Association will form part of the Spanish Chinese Business Advisory Council to strengthen the economic and business ties between both nations.

LaLiga was a key participant at a recent meeting between the Spanish President Pedro Sanchez and President Xi Jinping of the People’s Republic of China. Alongside 34 leading businesses from Spain and China.

LaLiga president Javier Tebas attended the meeting to discuss how to strengthen both economic and trade relations, and the central role that football can play. President Jinping’s visit also served to strengthen the country’s ties with Spanish companies, including LaLiga, which maintains excellent relations with the government of the Asian nation.

During the visit, a lunch was held with Pedro Sanchez and representatives from the country’s most important Ibex 35 companies such as Repsol, Inditex, Telefonica and LaLiga.

One of the key points of the meeting was the commitment of both countries to promote sport as part of the education for Chinese children. LaLiga will play a part in this, promoting its methodology and projects which have already been put in place in both Spain and China, such as the recently inaugurated permanent training base, which was organised in tandem with the Chinese Football Federation.

Almost 300 million people across the globe are involved in football professionally and over 4 billion take part in it every day, underlining just how important a role sport can play in any society. In Spain, professional football goes beyond sport and has became an entertainment industry in its own right, capable of competing with the world’s leading companies from a variety of fields.