At its monthly meeting, The Board of Directors of the Lexington Center Corporation (LCC) voted unanimously to award Messer Construction Company the contract to build the new and expanded Lexington Convention Center.

The contract includes: All new construction costs, demolition of the Jefferson Street Bridge including the north abutment, new UK Hospitality Clubs, new upper arena chair back seats and new parking structures. The three-year construction project is slated to begin with a public groundbreaking in mid-July, 2018 and be completed in November 2021. The project will be built in phases to allow Rupp Arena and much of the existing convention center to remain in operation during construction.

The original 2014 Lexington Convention Center design, approved in December of 2016, was developed by NBBJ Architects of Los Angeles, CA, and EOP Architects of Lexington. With its dramatic, light-filled, architectural statement, the new expanded Lexington Convention Center will include 100,800sqft of exhibit halls, a 25,185sqft ballroom, 30,270sqft of flexible meeting spaces and 110,234sqft of pre-function and circulation space.

Today marks a very happy ending and an exciting new beginning to a project that will transform the life of downtown Lexington. There are many people to thank for their commitment and unwavering support of this project. We thank Mayor Jim Gray for first proposing the project in 2011 and former LCC Chairman Brent Rice who spearheaded it. Our gratitude extends to Governor Bevin and Secretary Landrum for the Commonwealth’s financial support. Special thanks to Councilmen Bill Farmer and Kevin Stinnett who were great advocates for this project and to LFUCG City Council for providing its financial support. Thanks also to VisitLex for its financial contributions.  We thank the University of Kentucky for its commitment for the next 15 years, revitalizing Rupp Arena as the primary place and home court for UK basketball. And finally, thanks to Lexington Center CEO and President Bill Owen, and the staff of Lexington Center.

The Lexington Center broke ground July 18 on the long-awaited, highly anticipated US$241m replacement and expansion of the Lexington Convention Center.

The single largest capital public improvement project in Lexington’s history, this project is expected to elevate Lexington’s convention facilities, bringing a new level of vitality to downtown and strengthening Lexington as a convention and meeting destination.

Today marks a milestone in what will be a transformative moment in the future of the Lexington community. With the support of Governor Bevin, the General Assembly, and Lexington City leaders, we are taking another step in sustaining the vitality of our city’s downtown, creating a catalyst for great economic growth and new opportunities for business, entertainment and culture.

According to Bill Owen, CEO and President of Lexington Center:

The current facility has served us well for the past 42 years, but the need for more exhibit space has been in discussion since 1994 and recommended by 3 different studies dating back to 1986. This project, when completed, really elevates Lexington as a convention destination to a whole new level.

The new facility is projected to increase the annual economic impact of the centre by US$58m, and will help Lexington remain competitive and attract more convention business that represents a significant portion of the state’s tourism business. 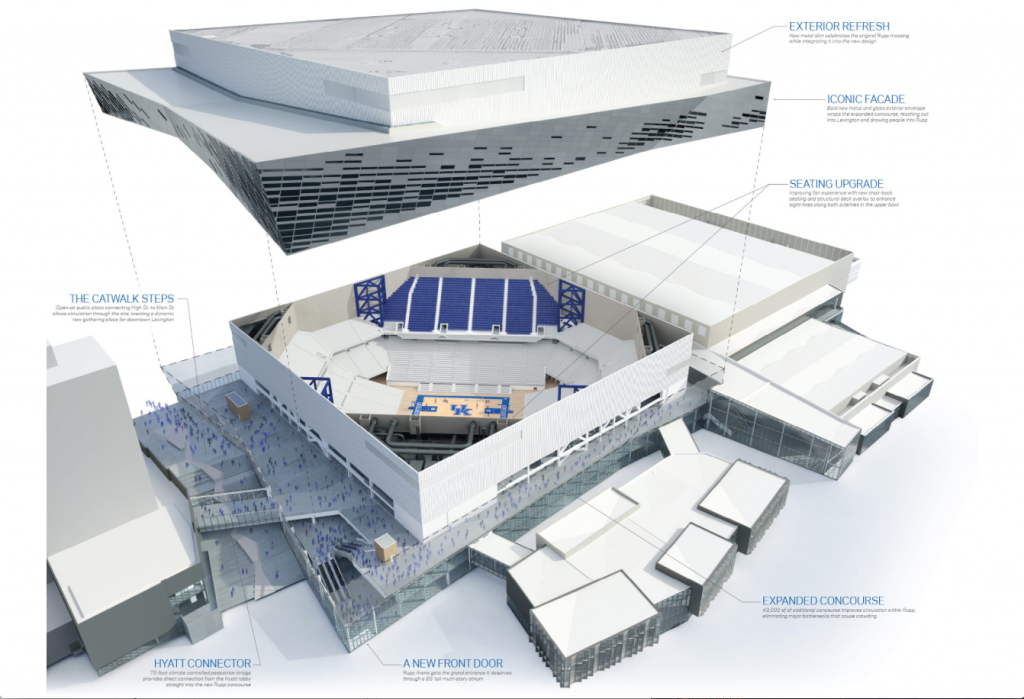 The project is designed to better connect Rupp Arena and the Convention Center to downtown. The parks and plazas that weave through it will provide new public gathering spots. They include the “Cat Walk,” an exterior stair and gathering spot outside of Rupp Arena; a new outdoor space at the Convention Center called the “Gorge” that also provides outdoor exhibit space; interactive water features; an extension of the Town Branch Trail; and, in the future, the planned Town Branch Park.

The convention center and Rupp Arena will remain open throughout the 42-month construction period, while the project is carried out in phases, with completion scheduled in November of 2021. 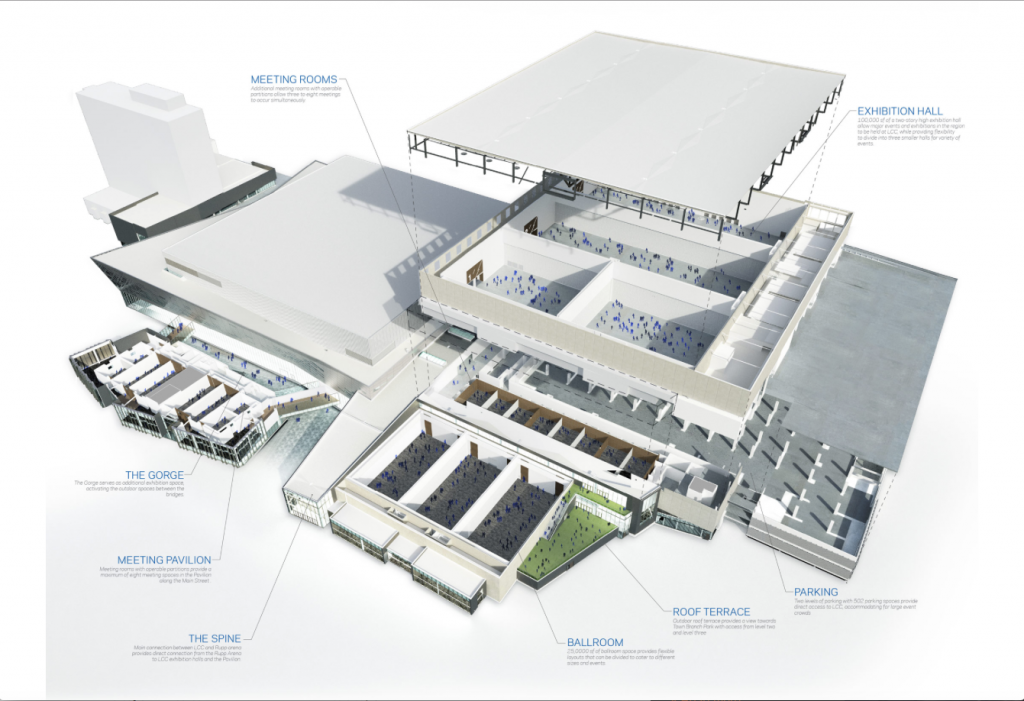