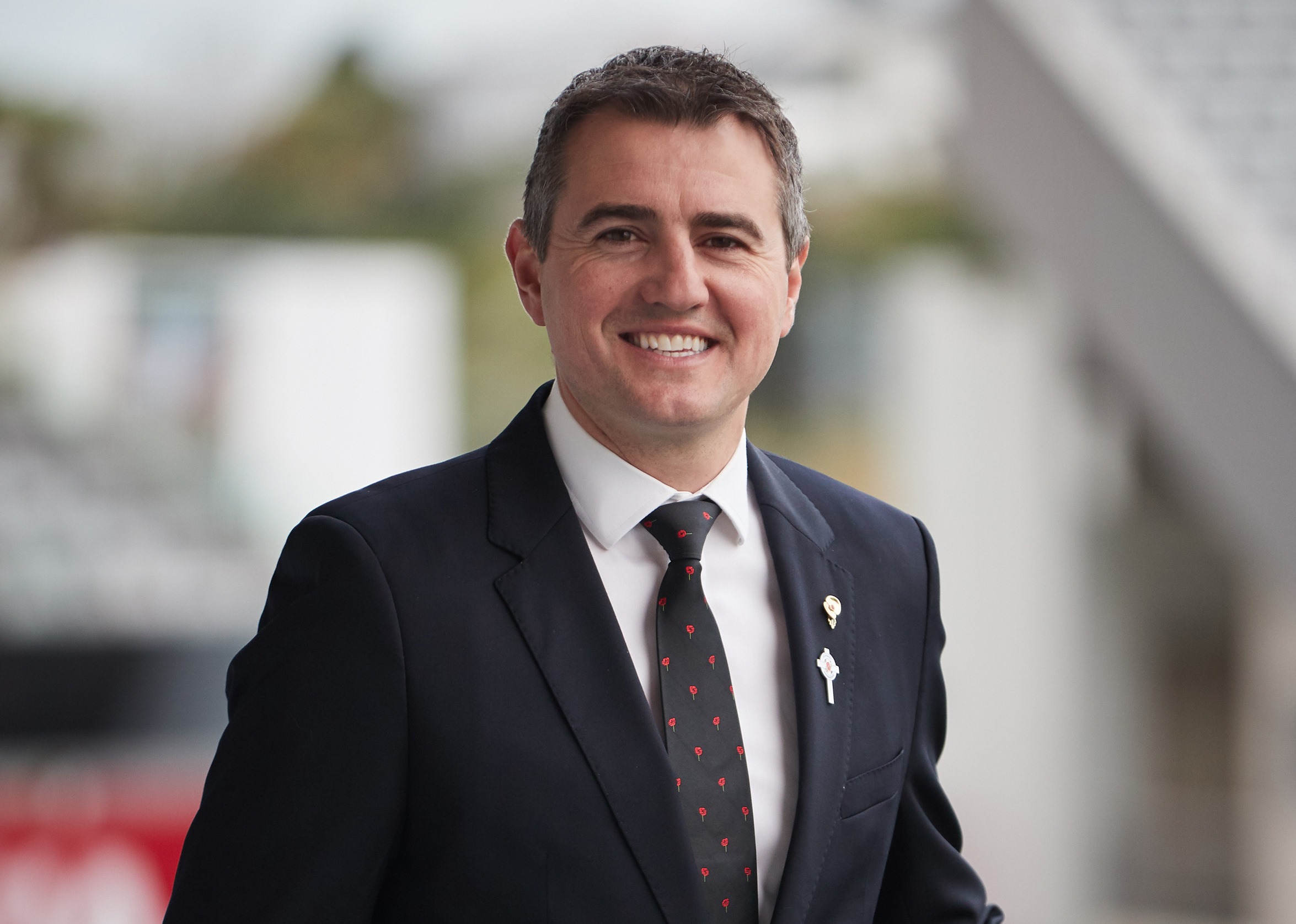 In this latest industry interview, SVB’s Katie McIntyre hears insights from Nick Sautner, CEO at Eden Park, New Zealand’s National Stadium, which hosts over half a million local and international sports fans and patrons each year.

Nick, can you start off by telling us a little about yourself, your role at the almost 50,000-capacity Eden Park as Chief Executive Officer (CEO) and your career highlights to date?

I have spent two years at New Zealand’s national stadium after crossing the ditch with fifteen years’ experience in the stadium, event and entertainment sectors.

Past experiences have seen me in roles such as Chief Commercial Officer and Chief Operating Officer at the AFL, Etihad Stadium in Melbourne and the West Australian Football Commission in Perth.

My passion for sport and high performance was first ignited when I embarked on my VFL career with Sandringham. I played 260 matches and won 5 premierships with the club which included holding the competition record for leading goal kicker.

I have studied in China, Germany and the United States and hold Bachelor degrees in Business and the Arts, as well as a Master of Business Administration (MBA) from the University of Melbourne.

I have created and overseen several leading marketing, brand and communications strategies along with negotiating commercial, naming and broadcast rights for some of the world’s preeminent stadia.

A career highlight was transforming the hallowed turf of Eden Park into a 9-hole golf course, the ASB G9. Imagine teeing off from one of the highest points at one of the world’s most iconic stadiums! The bonus 10th hole was in the famed All Blacks Changing Room which was a real drawcard for fans young and old alike.

Being able to unite my love for high-level sport and creative stadia initiatives has made my role personally rewarding.

As CEO at Eden Park, what are your key objectives for the next 2-4 years and what are the main challenges you face?

Since becoming CEO, our team has introduced a three-year strategic plan to be implemented across the business, including ‘Our Game Plan’. This includes aiming for excellence in the following areas as a collective team:

Stadia are a critical cog in the sports and entertainment wheel and they rely on events to cover their huge infrastructure investment and maintenance costs. However, it’s widely acknowledged that content is king, so unsurprisingly our imminent challenge is content and increasing utilisation of the asset. If a hotel could only operate once a fortnight it would be incredibly challenging to deliver a business model that is commercially viable, and that is the current reality we are facing at Eden Park.

Can you tell us about your recent community engagement initiatives, like The Hood, membership programmes and what the benefits are of ensuring optimised reciprocal local community/venue relations?

Eden Park is for all of Auckland and New Zealand. We are committed to working with our neighbourhood and local business associations to maximise the benefits for the country and community. We are proud to have won the ‘Best Community Integration’ award at the World Stadium Congress Awards in Amsterdam earlier this month.

Last year we launched ‘The Hood – Eden Park Supporters’ Club’ to deliver significant benefits to the community. The purpose of this engagement is to offer our neighbouring community the chance to be part of Eden Park, have access to our facilities and be privy to some of the fantastic offers our partners can provide.

Recently, we ran a promotion where neighbours could be nominated for one lucky family to receive a house paint makeover thanks to our friends at Resene and Master Painters New Zealand.

Members of ‘The Hood’ have had the opportunity to play backyard cricket on our hallowed turf, attend Christmas barbecues and are offered tickets to events at the stadium. 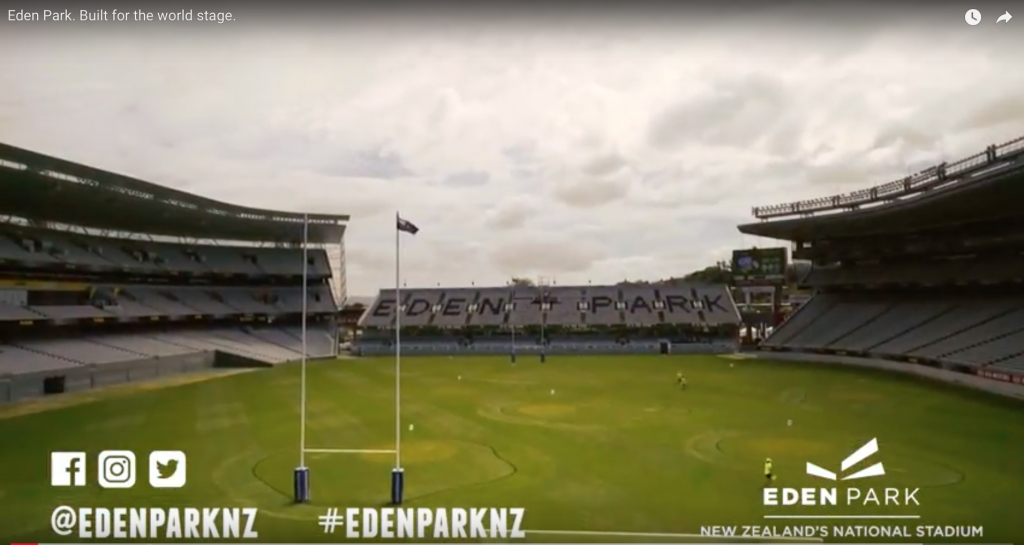 Click on the image above to watch a video on Eden Park. Built for the world stage.

How important is delivering new and fresh content when it comes to ensuring maximised fan retainment and fan experiences?

Auckland’s unprecedented growth in recent years demonstrates the city’s global appeal and diverse multicultural communities. Auckland is the largest Polynesian city in the world and along with its European, Asian and other diverse ethnic communities, there is now interest in all sporting codes, as well as recreational, musical, and cultural events.

In this context, we have just launched a campaign recognising Eden Park’s global significance. Eden Park’s tour programme currently attracts over 90% of visitors from overseas. Recent statistics show that around 35% are from France, 24% are from the U.K., 18% are from India and some even hail from the Cayman Islands.

Therefore, Eden Park is, and needs to remain, a blank canvas to express creativity through sport, arts, music and entertainment, reiterating the stadium is for everyone and not solely for supporters of rugby and cricket.

How are you currently utilising technology at Eden Park? And what innovations/developments can we expect to see here over the next 12-48 months?

The event and non-event day engagement with fans is critical.

During the DHL New Zealand Lions Series, an app was launched by Vodafone, the All Blacks and Sky, to connect fans and replay unmissable moments from various vantage points. In the future, technology will be developed further to include seat-specific food and beverage options, along with in-seat service functionality, not dissimilar to what has been seen offshore.

A key challenge stadia are faced with across the globe is the increased competition for eyeballs arising from the sale of broadcast rights, plus the distribution disruption and changing consumption patterns via mobile and tablet technology.

The need, and time, for stadia to receive a percentage of broadcast revenue and advertising revenue derived from virtual advertisements specific for broadcast markets, is now.

Finally, what would you say has been the most influential either industry innovation, transformation or development over the last decade? And how do you foresee the sector evolving over the next 10 years?

Current stadia infrastructure and the traditional design of function facilities and corporate suites are dated and provide a challenging business model to overcome. These spaces need to be transformed into shared office spaces to house start-ups and new businesses, as well as facilities such as community childcare centres that can drive revenue and cross-promote each other.

Few stadia can derive their revenue solely from their current event calendars. Some leading stadia around the world attribute their number one revenue stream to car parking amenities. Usually the playing surface is a suspended slab, which allows a car park to operate beneath it permanently, collecting revenue from both businesses and event day parking.

Moving forward, the economy of sport is fundamentally broken. The immediacy of player needs is preventing long term investment to maintain and replace stadia infrastructure (without taxpayer funded support), which is fundamental to the presentation and consumption of sport now and in future.

Who will lead this change? 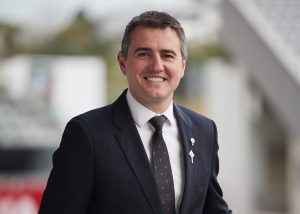 Huge thanks to Nick Sautner for taking the time out of his extremely busy schedule to do this interview with us.