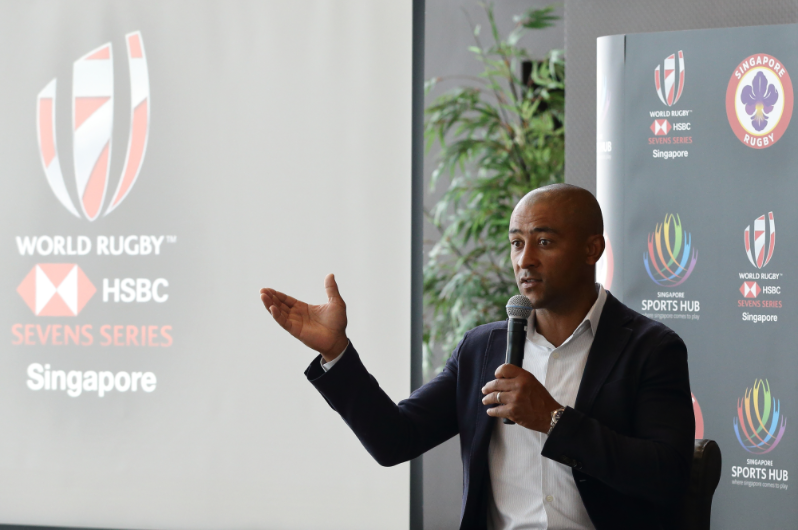 Packed with fringe events, the World Rugby series at the Singapore Sports Hub gets better each year and is growing in stature, as Ian De Cotta reports.

The HSBC Singapore Rugby Sevens at the Singapore Sports Hub National Stadium – the region’s premier sports, entertainment and lifestyle hub – is more than just a weekend of 16 international teams battling to win the competition and earn precious points as they jockey for leaderboard positions. It’s about an electrifying festival that has something from everyone in the heart of a buzzing city.

This has propelled the Singapore leg of the 10-nation HSBC Sevens World Series into a key stop since its return to the competition in 2016*. Australia’s 1999 World Cup-winning legend George Gregan believes it has all the right ingredients to grow in stature and be as attractive as Formula 1’s night race at the Marina Bay Street Circuit, and even golf’s US Masters on the international sports calendar.

Gregan, the former Australia skipper, who first attended the Singapore event in 2016, commented:

All events can always grow and get better and the HSBC Singapore Rugby Sevens, which is hosted at Singapore – a major international city and business hub – is on an upward trajectory, and this is exciting.

And it is staged at the Sports Hub’s world-class National Stadium that does not have a bad seating at all, even if you are at the highest level. There is a kind of atmosphere in the arena that creates a great energy and with the pitch in superb condition this year, there is going to be some fast rugby action at the end of this month. This is what all players and fans want in the sport. 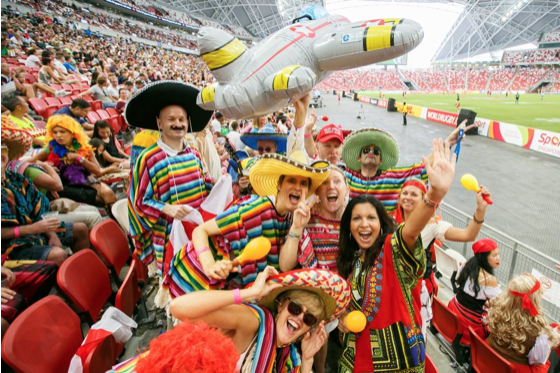 *Singapore first hosted the World Rugby Sevens Series in 2001-02 and again in 2005-06 before the previous National Stadium was closed and torn down to build the current arena. The latest round will take place this weekend, April 28 and 29

The 2018 edition over two days from April 28 is set to deliver a fan experience that are a few notches up from previous years.

In between the battle on the field, famed American band, The Village People, will headline the music programme. Top local groups Jack & Rai, Sambamasala, Too Much Drama and Jive Talkin’, who have performed with some of the world’s legendary names such as B B King, Kenny G and Def Leppard, are also pencilled in to perform.

But the party kicks off on April 27 before the pitch action begins with “Music After 7s” at Singapore’s hottest nightspot at Clarke Quay, until after the final match is played.

Living up to its reputation as a family-focused event, the HSBC Singapore Rugby Sevens’ “Rock, Ruck and Rumble” is set to entertain children at the National Stadium in a bigger way too. Three of Hasbro’s leading characters – Transformers, Nerf HQ, and My Little Pony – will be there together for the first time in an immersive zone for patrons. So will the Superdudes, an internationally acclaimed act that performs for kids.

To challenge young fans, organisers Rugby Singapore are staging some of theworld’s most challenging Spartan obstacles for them to tackle. There will also be mini motorbikes to teach those between 18 months and five years old how to ride and race on them.

But as a nation known globally for its culinary tradition, the highlight for many, as in previous editions, is perhaps the wide spread of cuisine around the stadium.

There is going to be a lot happening outside the arena, especially the availability of a range of international and local hawker food stalls, showcasing what is special about Singapore. And I am looking forward to this because I love my food. But more importantly it is going to bring people from around the world together, which is what makes this country unique.

Patrons to the games can expect an electrifying experience this time round because organisers have been building up excitement of the event since March 1, when they rolled out the Singapore Rugby Carnival. It is a road show that travels to more than 200 places on the island to promote the sport and entice fans to buy their tickets early.

Sponsors Pan Pacific Group and several retailers have come on board to offer discounts from hotel rooms for visiting fans to tickets for the Singapore Sevens and food and beverage at several nightspots and at Sentosa island resort.

But the main attraction is the National Stadium, which has two key features that make the Singapore leg an attractive stop on the HSBC Sevens World Series’calendar. It has world’s largest free-spanning retractable dome roof and air- cooling for all spectator seats. These allow competition on the pitch to continue uninterrupted in all weather conditions.

As we all know, it is usually very warm in Singapore, but the stadium inside is built to be cool for spectators. I especially love this stadium because of its covered roof. As a player, who used to play at the highest levels, I know the teams that are coming here feel the same way because when the crowd inside it is cheering them loudly, the noise reverberates around the arena and it is a really special feeling.

All Blacks prop, Tone Ng Shiu, agrees, saying at the Hong Kong Sevens early this month that the New Zealand team are eager to return and play in Singapore:

It’s one of my favourite countries to play at. The crowd loves usand always gets behind our team.

There’s always a beautiful environment inside the stadium, and one of myfavourite moments was playing against South Africa there last year. It wasn’t thecup final, but the atmosphere while we were playing was just fantastic. I hope it remains on the calendar for a long time because I also love the big city.

At the crossroad between the East and West that has a vibrant nightlife and major attractions such as Universal Studios Southeast Asia’s largest aquarium at Sentosa, Singapore is a top draw for tourists, as it is also widely regarded as a safe country to visit.

For Fiji coach Gareth Baber, it is more than this:

I, too, enjoy travelling to Singapore, but obviously we are going there to do a job. Singapore did a fantastic job last year in putting the tournament together, and we’re looking forward to going back.

It is a point that resonates with Spain’s Jaike Carter, who says the leg in the Lion City gets better each year:

I think it is already a successful event because when Singapore organises something it reaches for the highest levels and because of this, the Sevens there has the potential to become as big as Hong Kong.

Singapore, Gregan adds, ticks all the right boxes in hosting the HSBC Sevens World Series, whether it is putting on a great show or having excellent facilities at the Sports Hub National Stadium, such as changing, meeting and recreational spaces for teams, and for players to recover in between matches.

An important factor is that Singapore is also a pathway to Asia and has theability to grow the sport in the region. It is also where a lot of international business are done, and I know rugby and business mix a lot, which is a good mix that fits well with Singapore and World Rugby. 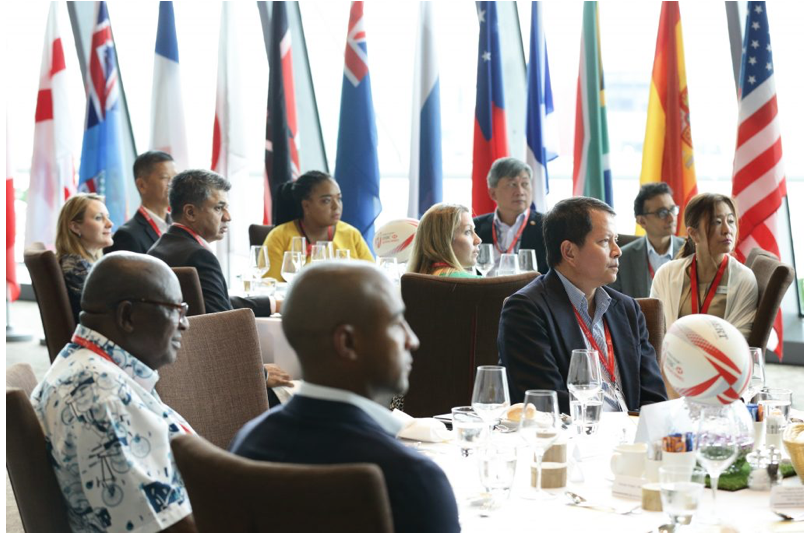