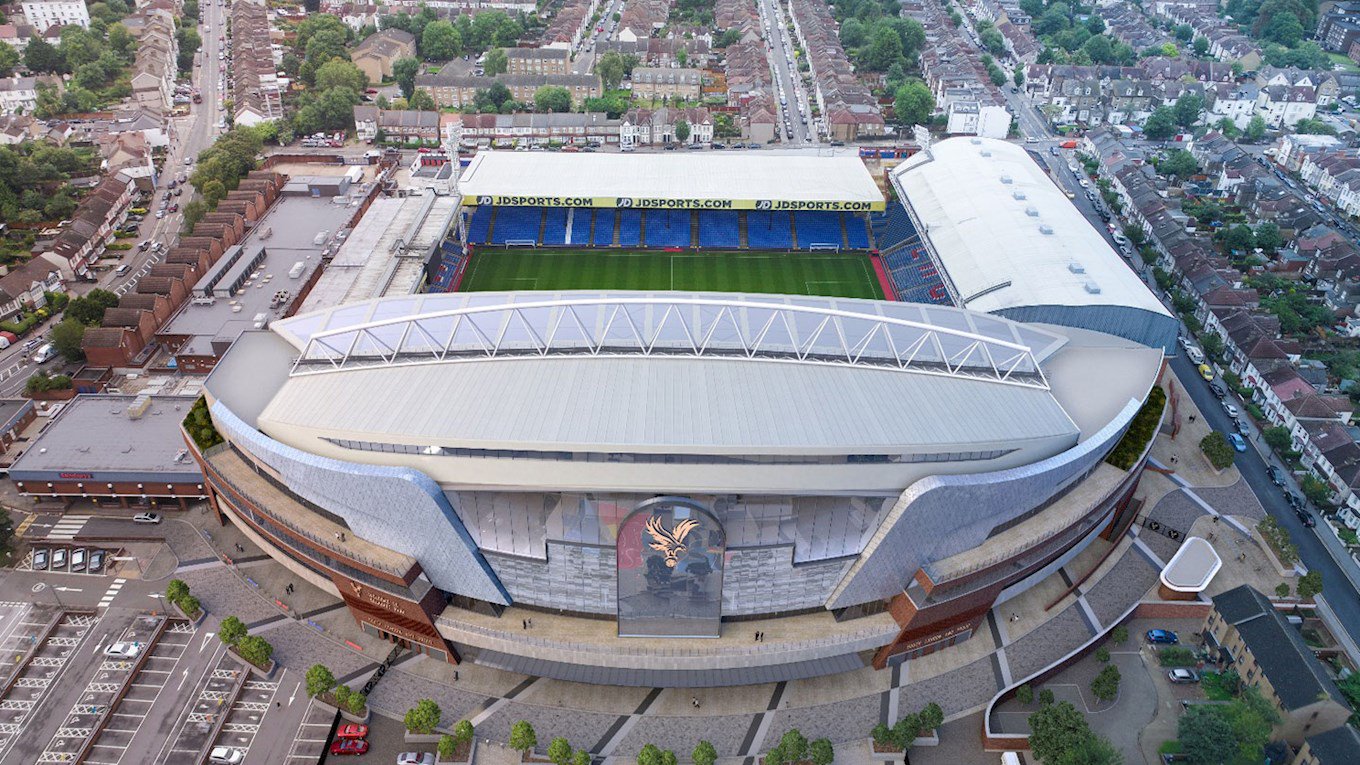 Crystal Palace Football Club (CPFC) has released a stunning new computer generated image from the skies above Selhurst Park of how the proposed redevelopment, designed by renowned sports architecture and design practice KSS, would transform the south London stadium.

The image includes the effect of the works upon six houses on Wooderson Close, and CPFC has reiterated to Croydon Council that if planning permission is granted, the costs of re-housing affected residents is top of the club’s priorities.

CPFC has committed to working with Croydon Council and to ensure all residents affected are re-housed in equivalent properties – financed by the club – in one of the surrounding wards, and will also assist with the associated costs of moving.

In addition, six new family homes would be built elsewhere and financed by CPFC. This means there would be no net loss of housing in the borough as a result of the club’s redevelopment plans.

We’ve been working with the council over recent months specifically discussing the effect upon the residents on Wooderson Close – which we all agree is something that needs to be done carefully and sensitively. We remain fully committed to that process, and to ensuring, should we be successful, that residents are dealt with both fairly and with respect.

I’d like to thank the council and all other stakeholders who have been so supportive to date. Everyone seems to understand this is overwhelmingly positive for south London.

Members of the public are being encouraged to submit their comments on the club’s application for the consideration of the council’s Planning Committee. To do so, click here

Speaking to local media recently, Parish provided a positive update about the club’s redevelopment plans, which are due to be discussed by Croydon Council’s Planning Committee on April 19, he said:

We’re working with the council and stakeholders to get a positive outcome. We believe that if everyone co-operates and works hard together between now and then, there’s no reason for us not to get a positive determination. It would be huge for the club and the area.

We’ve been working with the council over the last 3 or 4 months, looking at the objections that people may have with our application. Things like transport issues, litter, the impact on the residents on Wooderson Close – which of course is something that needs to be done carefully and sensitively working with the council. I hope that we have responded well to the issues that have been raised, and they’ve raised the questions in a very positive way, so it feels very positive at the moment.

The sense I get is that the vast majority of people want it to happen and are working hard to make it happen.  It would be a positive message for Croydon, south London, and the club. There’s a huge regeneration project going on in Croydon, and we want to be a part of it.

The plans, which were unveiled in December and can be seen in full on stadium.cpfc.co.uk, focus on a major revamp of the Main Stand, which would increase Selhurst Park’s capacity to 34,000. In addition, there would be other improvements made to the rest of the ground, including the removal of the gantry in the Arthur Wait Stand to improve sightlines for fans, an extension to the length of the pitch, which would make the stadium eligible to host international football in the future, as well as improvements to the concourses and stadium interiors.

Commenting upon the Main Stand design itself, Parish said:

It’s a beautiful design, and we worked very hard with the architects KSS to get something special. We’ve listened to the fans over a long period of time and they love how we’ve incorporated our heritage into the designs – the Crystal Palace, the Eagle. Everyone I speak to think it looks iconic.

Parish was asked by the media if the club would go ahead with the plans if the worst-case scenario of relegation became reality, and the Chairman replied resolutely:

We have to plan for every eventuality. My aim is to move the club forward – whatever happens, we’ve got to find a way. It’s just such an important project because the aim of the club is to be in this league. In my view, this is essential to the club’s development. But to reiterate once again, I completely believe in this team, this manager and these players and that – with everyone’s tremendous support – we can retain our status in the Premier League once again.

I’d like to thank the council and all other stakeholders who have been so supportive to date. Everyone seems to understand this is overwhelmingly a positive thing for south London. 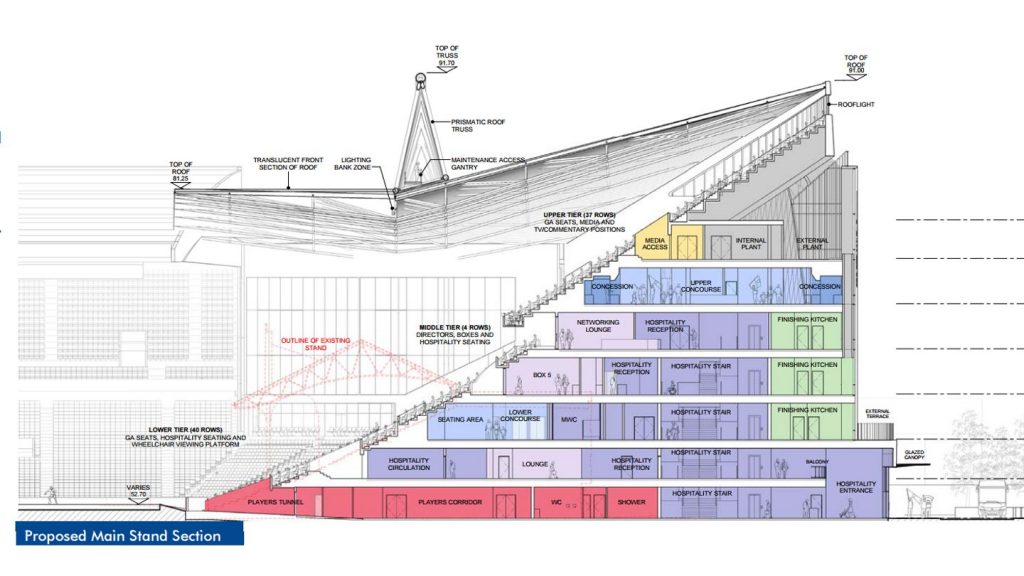 The diagram above shows the difference in scale of the proposed construction compared to the current Main Stand, which has been a part of the famous old stadium since its opening in 1924. As well as the new stand boasting a gross internal area of 25,072sqm, its roof will be 41m tall to double the current number of storeys to six